Garuda Indonesia has received its first Airbus A330-900. This new generation widebody aircraft is the first of 14 A330-900s ordered by the airline.

The airline currently operates 24 A330 Family aircraft on regional and long-haul routes. The A330-900’s increased range and enhanced economics will contribute to Garuda Indonesia’s fleet modernisation and growth plans, allowing the airline to launch non-stop services from Jakarta to key destinations in Europe.

Garuda Indonesia’s A330-900 is configured for 301 passengers in a comfortable two class lay-out with 24 Business class seats and 277 in Economy.

With capability to reach Europe nonstop from South-East Asia, the A330neo’s increased range and enhanced economics will bring a step-change in fuel efficiency for AirAsia’s long haul operations.

During the event, media and other guests visited the new cabin for the first time. The Thai AirAsia X A330-900 features 377 seats in a two-class configuration, comprising 12 business class and 365 economy class seats.

AirAsia X currently operates 36 A330-300 aircraft. The airline is the largest customer for the A330neo with 66 on order. In addition, the airline will acquire two aircraft on lease from Avolon this year.

The A330-900 is the larger of the two A330neo variants. The A330neo Family is the new generation A330, comprising two versions: the A330-800 and A330-900 sharing 99 percent commonality. It builds on the proven economics, versatility and reliability of the A330 Family, while reducing fuel consumption by about 25 percent per seat versus previous generation competitors and increasing range by up to 1,500 nm compared to the majority of A330s in operation.

Virgin Atlantic has selected 14 A330-900s to replace its A330ceos from 2021, with options to further expand its fleet of highly efficient wide-body aircraft. The firm order for eight aircraft and six additional on lease from Air Lease Corporation, was signed at the Paris Air Show by Shai Weiss, Virgin Atlantic CEO and Guillaume Faury, Airbus CEO.

Virgin Atlantic currently operates a fleet of 40 wide-body aircraft and will soon take delivery of its first of 12 A350-1000s. This latest order for A330neos is a further commitment by Virgin Atlantic to continue modernising its fleet with aircraft offering the highest standards of fuel efficiency and noise reduction alongside the best in class cabin comfort.

The A330neo Family is the new generation A330, comprising two versions: the A330-800 and A330-900 sharing 99 percent commonality. It builds on the proven economics, versatility and reliability of the A330 Family, while reducing fuel consumption by about 25 percent per seat versus previous generation competitors and increasing range by up to 1,500 nm compared to the majority of A330s in operation.

The A330neo is powered by Rolls-Royce’s latest-generation Trent 7000 engines and features a new wing with increased span and new A350 XWB-inspired Sharklets. The cabin provides the comfort of the new Airspace amenities including state-of-the-art passenger inflight entertainment and Wifi connectivity systems. 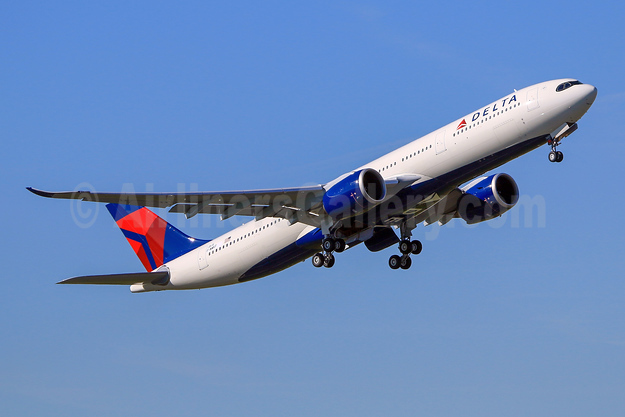 An environmental milestone was set as a Delta crew ferried the new A330-900 back to the company’s Atlanta base using a jet fuel blended from conventional sources and non-petroleum synthetic fuel.

Delta will initially base its A330-900s at Seattle-Tacoma International Airport, where it will operate the aircraft on flights to Shanghai, Seoul and Tokyo Narita. Delta will configure its A330-900s for 281 passengers, including 29 in business-class suites, 28 in premium economy, 56 in extra-legroom economy seats, and 168 in standard economy. The aircraft will feature Delta’s new internally developed in-flight entertainment system.

Powered by the latest Rolls-Royce Trent 7000 engines, and featuring a new wing with increased span and A350 XWB-inspired Sharklets, the A330neo provides an unprecedented level of efficiency – with 25 percent lower fuel burn per seat than previous generation competitors.

The A330-900 can accommodate 287 seats in a typical three-class layout or up to 440 for high-density configurations with a range of up to 7,200 nautical miles.

Avolon, the international aircraft leasing company, has announced the delivery of one Airbus A330neo to Azul. Avolon has 15 aircraft on lease to Azul.

The first Airbus A330-900 (the pictured F-WWKF to become N401DZ) wide body destined for Delta Air Lines made its inaugural test flight Tuesday from Toulouse Airport. The highly fuel-efficient twin-engine jet, one of 35 Delta has on order, is due to be delivered to the Atlanta, Georgia-based airline in the coming weeks.

The A330-900 is the larger of the two A330neo variants that Airbus launched in 2014. The A330neo brings significant efficiency improvements while also introducing the award-winning Airspace by Airbus cabin, which offers the newest and most advanced in-flight experience with extra personal space, larger overhead luggage bins, latest generation in-flight entertainment system and state-of-the-art ambient lighting.

Incorporating the latest-generation Rolls-Royce Trent 7000 engines, along with aerodynamic enhancements – including new extended composite wingtips which provide 3.7 metres of increased overall wing-span, as well as increased lift and reduced drag – the A330neo is a more efficient aircraft, delivering 25% lower fuel burn than previous generation aircraft and the lowest seat-mile cost in its category. The A330-900 range is 6,550 nautical miles in a typical three-class configuration.

TAP Portugal has signed a firm order with Airbus for 53 Widebody and single aisle aircraft including 14 A330-900neo, and 39 A320neo Family aircraft (15 A320neos and 24 A321neos). The aircraft will join TAP Portugal’s fleet as part of its fleet renewal announced by the airline’s new majority owner Atlantic Gateway. As part of the agreement, TAP Portugal is replacing its previous order of 12 A350-900s with the A330-900neo.

AirAsia X (AirAsia.com) (Kuala Lumpur), the long haul affiliate of AirAsia (AirAsia.com) (Malaysia) (Kuala Lumpur), has placed a firm order with Airbus for 55 A330neo aircraft. This is the largest single order to date for the A330 Family and reaffirms AirAsia X’s position as the biggest A330 airline customer worldwide, having now ordered a total of 91 aircraft. The announcement covers the firming up of a Memorandum of Understanding (MOU) for 50 A330neo signed during the Farnborough Air Show in July 2014, plus an additional five aircraft. Deliveries of the newly-ordered aircraft will begin in 2018.

The order for 25 state-of-the-art Airbus A350-900 aircraft and 25 advanced Airbus A330-900neo aircraft fits within Delta’s existing capacity and capital expenditure plan and continues the airline’s focus on making prudent, cost-effective investments in its fleet.

“Delta always approaches fleet decisions with a balance of economic efficiency, customer experience enhancements, network integration and total cost of ownership,” said Nat Pieper, Delta’s Vice President – Fleet Strategy and Transactions. “The A350 and A330neo support our long-haul, transoceanic strategy and join a mix of Boeing and Airbus aircraft that provide exceptional flexibility for Delta’s global network as well as strong cash-on-cash returns for our shareholders.”

The long-range Airbus A350-900 will continue Delta’s optimization of its Pacific network, operating primarily on long-range routes between the U.S. and Asia. The jets are expected to generate a 20 percent improvement in operating cost per seat compared to the Boeing 747-400 aircraft they will replace. Delta will take delivery of the A350 beginning in the second quarter of 2017.

The A350-900 will be powered by two fuel-efficient Rolls Royce Trent XWB engines.

The widebody A330-900neo, an enhancement of Airbus’ successful A330 family featuring greater aerodynamic and economic efficiency, will be deployed on medium-haul trans-Atlantic markets as well as select routes connecting the U.S. West Coast and Asia. The aircraft are scheduled to enter the Delta fleet in 2019 and will deliver a 20 percent operating cost savings per seat over the Boeing 767-300ER aircraft it will replace.

The A330neo features the Rolls Royce Trent 7000 engine which is built with similar technology to the Trent XWB on the Airbus A350.

Delta began a structured fleet renewal in 2011 with the selection of new Boeing 737-900ER aircraft along with Boeing 717s and two-class Bombardier CRJ900 regional jets, and continued it with transactions for Airbus A321 and A330 aircraft. Those aircraft are replacing inefficient older technology airplanes, generating substantial cost improvement and increased customer satisfaction. The airline continues to invest in the onboard product and amenities available to customers on its entire domestic and international fleet including installation of transoceanic satellite in-flight Wi-Fi, Delta Studio featuring a library of free streaming programming as well as more than 1,000 on-demand movies, television shows and music on large, high-definition seatback monitors, and other service improvements.