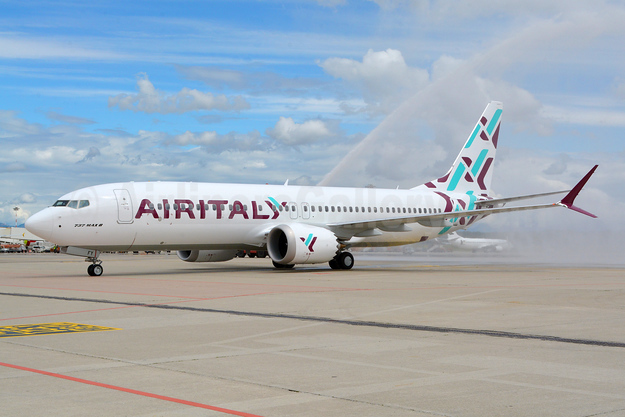 Air Italy (3rd) (Milan-Malpensa), as previously reported, took delivery of its first Boeing 737-8 MAX 8 (EI-GFY) on May 12, 2018 in Seattle. Two days later the rebranded carrier, with officials from part-owner Qatar Airways  standing by, welcomed the new airliner to the Milan Malpensa base with the water cannon salute (top) and the official unveiling. A ribbon-cutting ceremony was also held with Qatar Airways CEO Al Baker presiding (below).

Below Photo: Officially the new MAX 8s are designated as Boeing 737-8s as detailed on the data plate.

The first Air Italy MAX 8 is due to go into revenue service tomorrow (May 16) from MXP to Naples and Palermo.

Air Italy is an Italian airline fully owned by AQA Holding (51% Alisarda and 49% Qatar Airways), with its headquarters in Olbia. The company was established with the name of Alisarda on March 29, 1963, with the aim of promoting tourism to Sardinia.

In 1991 the name was changed to Meridiana. Following a merger with charter carrier Eurofly and the acquisition of the charter company Air Italy the airline became the most important Italian player in international leisure flights.

In December 2017 growth towards new domestic, medium-haul and long haul destinations from Milan Malpensa was announced reflecting a major strategic shift for the company.

In February 2018 a new corporate identity was presented and the company was rebranded as Air Italy.

Beginning in May 2018, Air Italy will add new domestic routes from Milan to Rome, Naples, Palermo, Catania, Lamezia Terme scheduled for connection to its newest long-range destinations including New York, Miami and Bangkok (starting in September 2018).

All photos by Marco Finelli, reporting from Milan. 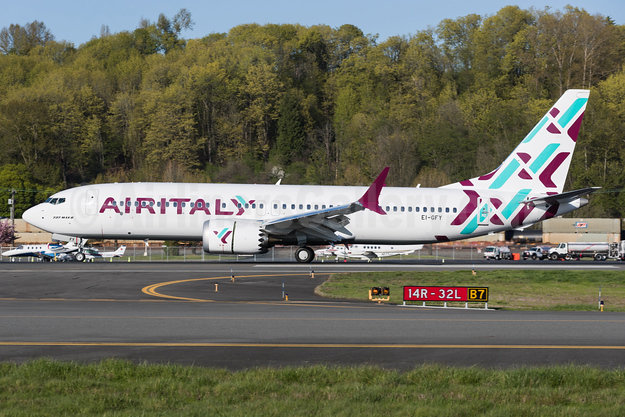 Air Italy (3rd) (formerly Meridiana) has 20 new Boeing 737-8 MAX 8 airplanes on order. It is the Italian launch partner for the new type.

The first MAX 8n has been painted by Boeing at Portland and is pending delivery.