Envoy Air made this announcement:

August 19 was National Aviation Day, and this year, Envoy is going all out. To honor Envoy’s rich history and the founding airlines that came together to become American Eagle Airlines and later Envoy, we’re proud to introduce an American Eagle Heritage Livery for our latest Embraer 170 (E170) aircraft – N760MQ.

This is the second aircraft out of at least seven E170s to be assigned to Envoy in the coming months. The aircraft is currently with the Eagle Aviation Services Inc. (EASI) team in Abilene (ABI) for conformity checks and to prepare the aircraft for revenue service in the coming weeks.

A huge thank you to Envoy’s Technical Services, Maintenance and Flight teams, our colleagues at American and everyone who worked hard behind the scenes to make this heritage livery a reality.

“We’re just as excited about the heritage livery as anyone else,” said Envoy Senior Vice President of Air Operations, Dee Temples. “We like that people take an interest in Envoy and its history, and that they’re enthusiastic about aviation.” 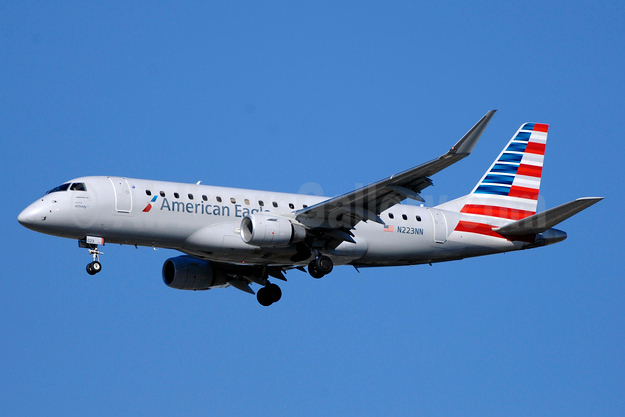 Envoy’s (formerly American Eagle Airlines) (subsidiary of American Airlines Group) (Dallas/Fort Worth) pilots, represented by the Airline Pilots Association (ALPA), will not be voting on the new proposed company contract any time soon. The Master Executive Council of the American Eagle Pilot’s Union, voted down the latest contract proposal by the company. The company’s proposal would have given the company pilot work rule and further pay concessions in return for new Embraer 175 regional jets to be flown by Envoy’s pilots.

Envoy’s management has made it clear that if the contract was not approved the company would be reduced and aircraft reassigned to other American Eagle carriers.  Once reduced in size, Envoy would be liquidated.

ALPA did not want its Envoy members to be flying for rates lower than other airlines and will now ask management about a timetable for liquidation. ALPA will help Envoy pilots find jobs at other carriers.

Is this the end of Envoy (like Delta’s Comair)?

American Eagle Airlines has more than 14,000 employees and a growing portfolio of business outside of its flying operations, including a robust aviation ground handling operation. Envoy was chosen as the company’s new name after an extensive selection and vetting process that included looking at more than 1,000 names and considering feedback from American Eagle Airlines employees. The name was chosen because Envoy is reflective of what the company does for the airlines it works with – serving as their ambassador and a representative to their customers.