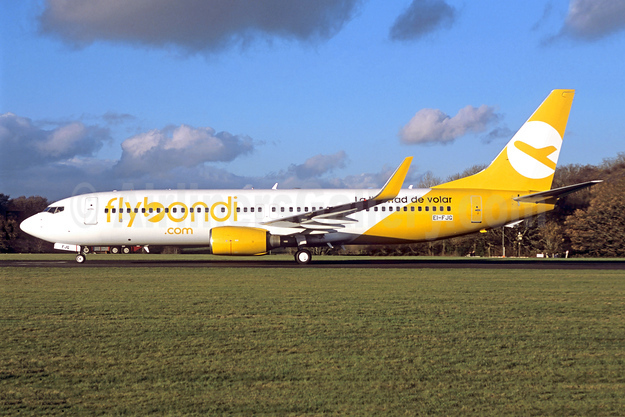 Flybondi on January 15, 2022 launched a new route from its Buenos Aires hub at Ezeiza International Airport to Ushuaia in the province of Tierra del Fuego in southern Argentina.

Ushuaia is the southernmost city in the world and is a gateway for Antarctica.

Flybondi operates from both Aeroparque (AEP) and Ezeiza (EZE) airports in Buenos Aires.

Flybondi’s Boeing 737-800 fleet is back to five aircraft.

Flybondi, the first low cost airline in Argentina, reported its results for December 2019 with indicators of excellence in its performance. During the last month of the year, the destinations of its domestic flights were consolidated with a load factor of 90%, which puts the airline on the podium of the industry with the best indicator. Moreover, the airline had 89% punctuality on its flights and broke records of transported passengers: more than 143,000 chose to fly low cost to reach their destinations.

Also, this month, the route to Florianopolis, its second destination in Brazil, began to operate and launched the route to Porto Alegre for sale, which together with San Pablo will be the first routes to open in 2020 (March and January respectively).

In this way, Flybondi offers a total of 20 destinations that connect through its 25 routes: 6 regional and 19 cabotage. It is important to highlight that the company’s offer for domestic flights includes routes that for more than 20 years had no new air offers, such as Posadas, Corrientes or Santiago del Estero, and some interprovincial connection routes such as Córdoba-Salta, Rosario-Iguazu, Córdoba-Neuquén. Approximately 20% of Flybondi customers travel on these routes, which do not pass through Buenos Aires.

With the new connections incorporated, Flybondi has established itself as the country’s leading low cost with more than 2,400,000 passengers transported, of which 480,000 are people who traveled by plane for the first time in their lives. For much of the year it was positioned as the third largest airline in the country with a market share of 9% and 15% on those routes to which it flies.

Shortly after completing 2 years of operation, Flybondi reinforces its commitment to generate a positive impact on the development of the Argentine air market, with a clearly federal objective and ensuring always offer a service with the highest standards of quality and safety, and with the lowest rates in the market.

– Only low-cost airline to connect Argentina with Paraguay, Uruguay and Brazil.

– Airline with the best occupation in Argentina and third in Paraguay

Destinations to which it flies

Flybondi, the first ultra-low-cost airline in Argentina, ended the month of August breaking its own records. According to ANAC (National Civil Aviation Administration). Flybondi became the largest low-fare airline in Argentina for travel between January and August of this year

During August, the company flew more than 143,000 passengers, a record number of passengers transported in a month. The airline has already flown over 1.9 million passengers since the beginning of its operations in January 2018. More than 285,000 people (15% of the total) flew for the first time in their life. In addition, with 82% of flights on-time, punctuality also marked the highest percentage in its 18 months of operation.

The occupancy factor remained at 87%, which explains – among other factors – that Flybondi has already managed to position itself as the third largest airline in Argentina. In addition, the airline has 9% of the market share in the entire domestic market and an average of 14% on those routes where it flies.

A large part of Flybondi flights are operated from El Palomar Airport (EPA), the first low cost airport in the country and Latin America, from which it flies to 16 destinations. Only 18 kilometers from the downtown, it has already positioned itself as the third airport of the Buenos Aires metropolitan area – after Ezeiza and Aeroparque – and the seventh nationwide.

Flybondi has announced a renewal of their alliance with “Superliga Argentina de Futbol SAF”.

SAF is the organization who manages the Argentina’s league of football soccer. Through this agreement, the airline will facilitate the transport of football teams between the different provinces of country.

Currently the Superliga (A series) is in the match week number 3 and it’s will extend until March 2020.

Flybondi on July 31 launched a new international route from Buenos Aires to Florianopolis.

“Adding Florianópolis as a destination consolidates our regional growth and our proposal for the summer season 2020. In this way we become a great option to fly to Brazil at ultra-low prices and demonstrates the commitment we have to connect Argentina more and more with neighboring countries and between provinces.” said Sebastián Pereira, CEO of the company.

“In addition to connectivity and supply, with each new route there is also other good news, because it generates direct and indirect employment and benefits economic and tourism development. And we know that our proposal of low fares will allow thousands of people to access the plane as a means of transportation,” he concluded.

This new route will operate three days a week with Boeing 737-800s.

Flybondi completed the second phase of its start-up by launching operations from El Palomar Airport in Buenos Aires after receiving permission from the government to operate commerical passenger flights from the third airport in the capital.

The first flight from El Palomar departed on February 9 to Cordoba.

According to Wikipedia, El Palomar Airport (IATA: EPA, ICAO: SADP), is a military airport in El Palomar, Argentina. It is the homebase of Argentine Air Force 1st Air Brigade (Spanish: Primera Brigada Aérea), which is mainly a transportation unit, and is located 18 km (11 miles) west of Buenos Aires, near the El Palomar station of the San Martín railway line.

The previous inaugural flight of the airline from Corboda was operated on January 26, 2018.

Flybondi (Buenos Aires and Córdoba) is the first low-cost airline in Argentina. The airline will operate Boeing 737-800s.

The new airline is planning to launch its first scheduled flight on January 26, 2018 between Córdoba and Iguazu.

The new airline plans to fly to these destinations: