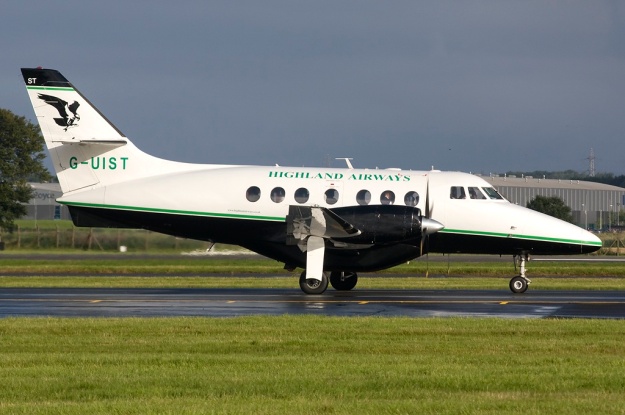 Copyright Photo: Fred Seggie. Jetstream 31 (3102) G-UIST (msn 750) is pictured at Glasgow on August 10, 2008. The fleet adopted this attractive Atlantic Airlines (now West Atlantic) color scheme in 2003 when the owners of Atlantic Holdings acquired Highland Airways. However in March 2007 Highland Airways underwent a management buyout from Atlantic Holdings led by A. Mossman but retained the livery until the end.

The airline was established and started operations in 1991 as Air Alba, operating for four years as a flying school. The company was renamed Highland Airways in February 1997 and expanded into scheduled operations. It was operating eight BAe Jetstream 31s, two Jetstream 41s and a single Britten-Norman Islander.

G-CEJP is pictured in action at Edinburgh in the rare hybrid. Copyright Photo: Fred Seggie.

Globespan Airways (flyglobespan.com) (Edinburgh) quickly put its Boeing 737-8BK G-CEJP (msn 29646) back into revenue service in May after the lease ended with Oman Air (Muscat). The result is this interesting hybrid livery.