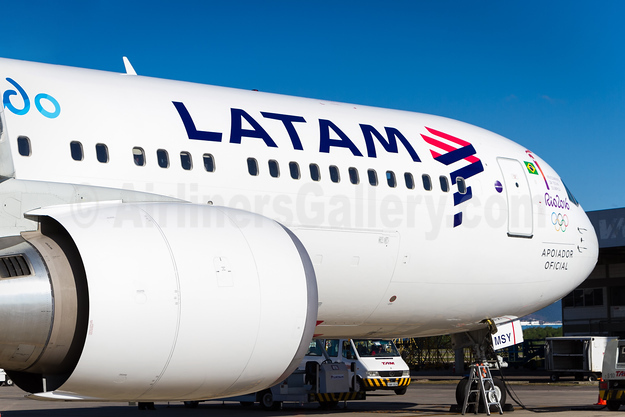 LATAM Airlines (Brazil) is planning to add a twice-weekly route linking Fortaleza and Orlando starting on July 5, 2018. The flights will be operated with Boeing 767-300s per Airline Route.

LATAM Domestic Routes in the rest of South America:

Austral Lineas Aereas (subsidiary of Aerolineas Argentinas) (Buenos Aires) and Embraer have signed a contract for the sale of two Embraer ERJ 190 jets. The Argentine airline currently operates 20 airplanes of this model.

Like the aircraft that are already in operation, Austral’s new E190s are the Advanced Range (AR) model, which allows the airline to fly on any route inside Argentina and to reach such important capital cities of Brazil as Rio de Janeiro and Sao Paulo, nonstop. The jets are configured with 96 seats in a two-class layout—eight in executive and 88 in economy—with a modern onboard entertainment system equipped with individual monitors.

American Airlines (Dallas/Fort Worth), which offers more flights to more destinations in Latin America than any other U.S. airline, has signed agreements to codeshare with both TAM Airlines (TAM Linhas Aereas) (Sao Paulo) and LAN Colombia (Bogota), representing a solid stepping stone in building a stronger bilateral relationship between American and LATAM Airlines Group. Once approved, these new codeshare relationships will provide expanded opportunities for American to serve new markets in Brazil and Colombia and for TAM Airlines and LAN Colombia in the United States.

In addition, American plans to operate a new Dallas/Fort Worth (DFW) – Bogota (BOG) route beginning in late 2013. American will also add service to Curitiba (CWB) and Porto Alegre (POA), Brazil from Miami beginning in late 2013, demonstrating its mission to provide customers with expanded options through a growing network footprint in Latin America. With the addition of Curitiba and Porto Alegre, American will serve nine destinations in Brazil.

Once the codeshare agreements are approved, these new relationships will provide American’s customers seamless connecting service within Colombia and Brazil.  At the same time, this partnership will allow TAM and LAN Colombia’s customers access to new destinations in the U.S. such as Boston, Chicago, Dallas/Fort Worth, Las Vegas and Seattle.

The new route between DFW and Bogota complements American’s existing service to Colombia through Miami (MIA), where it offers up to 35 nonstop flights per week to Bogota, Cali and Medellin. American’s MIA and DFW hubs allow it to serve 90 percent of U.S. – Latin America traffic more efficiently than any other airline’s combination of hubs. American offers more service to South America than any other U.S. airline.

TAM Linhas Aereas (TAM Airlines) (Sao Paulo) is planning to retire its last Boeing 767-300 on December 17 according to Airline Route. The venerable wide body is being replaced by newer Airbus A330-200s.