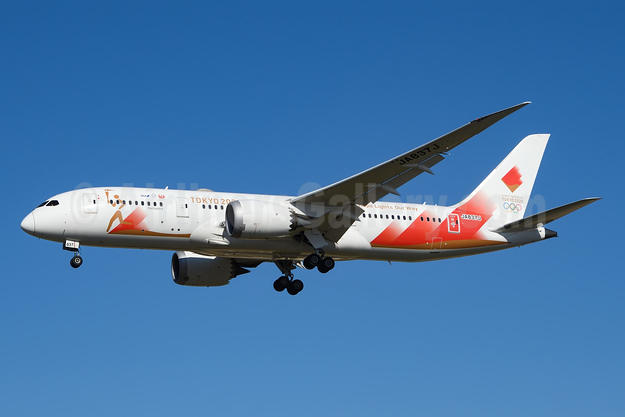 JAL and ANA jointly operated this Boeing 787-8 Dreamliner (JA837J) for the torch relay flight of the Tokyo 2020 Olympic Games. The aircraft carries the logos of both carriers.

JA837J is pictured arriving at Tokyo (Narita) (NRT) on March 20 after completing the mission carrying the torch from Athens to JASDF Matsushima Air Base. This livery was applied for about only a week, until the plane got repainted to the regular JAL scheme soon after this landing.

This will become a very rare photo since the Tokyo 2020 Olympic Games has been rescheduled for July 23, 2021 due to the coronavirus crisis.

Japan Airlines (JAL) has been promoting Doraemon as its campaign character in China since August 2016. Doraemon is one of the most famous characters representing Japan, and tremendously popular in China among all age groups.

JAL will introduce a newly painted Doraemon Jet (Boeing 787-8 JA837J) on select China routes in 2017, and launch its “Travel with Doraemon Campaign.”

The newly painted Doraemon Jet will operate between Tokyo (Haneda) and Beijing, and between Haneda and Guangzhou from Thursday, May 18, 2017. The Doraemon character painted on the aircraft adopted a specifically original design, inheriting from the original Doraemon Jet, which was introduced on the Tokyo (Narita) – Shanghai (Pudong) route in 2016.

Drinks will be served onboard in special Doraemon paper cups and postcards will also be available.