Alaska Airlines is giving its Mileage Plan members a chance to fly from Seattle/Tacoma to Phoenix on a special charter to cheer on its Chief Football Officer, Russell Wilson, when his team plays in the big game on February 1. Alaska is launching “Russell Wilson’s Fan Flight II – For Strong Against Cancer,” a four-day sweepstakes on Alaska Airlines’ Facebook page. 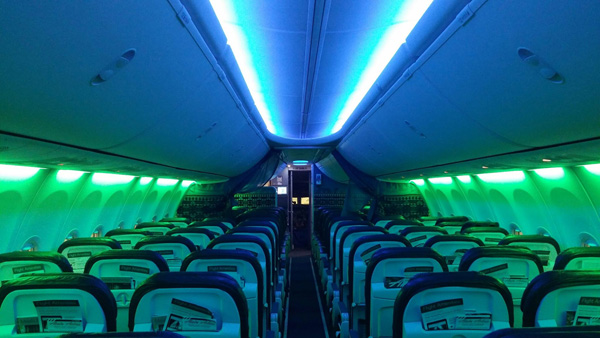 Above Photo: Alaska Airlines. Alaska has also changed the on-board mood lighting to the team colors.

Fifty-six prize winners will receive two roundtrip tickets for an ‘inflight tailgate party’ from Seattle to Phoenix on its “Go Russell 737-900ER” aircraft (above and below). Winners will also receive two nights of hotel accommodations, admission to an exclusive game day party and transportation to and from Phoenix Sky Harbor International Airport and their hotel.

The sweepstakes is open to Alaska Airlines Mileage Plan members who are residents of Washington, Oregon and Alaska.

Sweepstakes winners will be notified by phone and email beginning on Friday, January 23. To enter and review complete sweepstakes rules, visit www.facebook.com/AlaskaAirlines at 8 a.m. PT.

“We’re thrilled to have a second opportunity to fly Russell’s fans to the big game. We invite our loyal Mileage Plan members to join us in cheering on Russell and his team as they pursue their second championship win,” said Joe Sprague, senior vice president of communications and external relations for Alaska Airlines. “By entering this sweepstakes, Mileage Plan members are also helping to raise funds to help defeat childhood cancer, a cause that’s a priority for both Alaska and our Chief Football Officer.”

For every sweepstakes entry, Alaska Airlines will make a $1 donation to Strong Against Cancer, up to $50,000. Strong Against Cancer is a multi-year initiative dedicated to ending childhood cancer. Funds raised go directly to breakthrough pediatric cancer immunotherapy research underway at the Ben Towne Center for Childhood Cancer Research. In just one of the Center’s clinical trials for patients who have relapsed with acute lymphoblastic leukemia (ALL), this breakthrough treatment has had a stunning 85 percent success rate – 11 of 13 patients’ cancer went into remission. Alaska joined Wilson in supporting Strong Against Cancer initially pledging $100,000 and is donating an additional $3,000 for every touchdown scored by Wilson and his offense in the playoff games and the championship game.