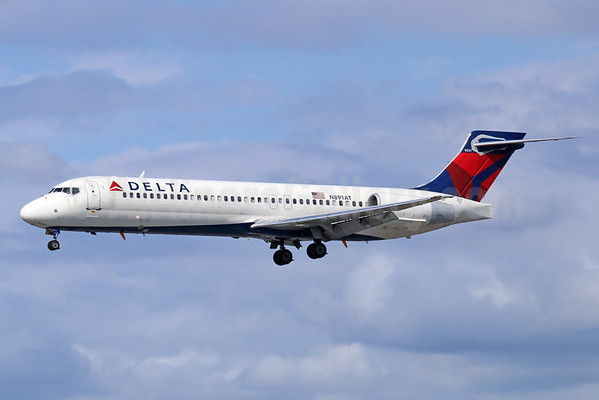 Delta Air Lines (Atlanta) today reported its financial results for the September 2015 (third) quarter, including adjusted net income of $1.4 billion or $1.74 per diluted share, up 45% from the September quarter of 2014.

Delta Air Lines (Atlanta) has opened up additional Boeing 717 routes and markets according to Airline Route. The former AirTran Airways 717s are leased from Southwest Airlines.

Delta’s operating revenue improved 6 percent, or $474 million, in the December 2013 quarter compared to the December 2012 quarter.  Traffic increased 2.0 percent on a 2.9 percent increase in capacity.

Comparisons of revenue-related statistics are as follows:

Total operating expense in the quarter increased 1.5 percent, or $125 million, year-over-year driven by higher volume and revenue-related expenses; the impact of operational, service and employee investments; and $56 million higher profit sharing expense.  These cost increases were partially offset by lower fuel expense and the savings from Delta’s structural cost initiatives.

Non-operating expense declined by $116 million as a result of prior year special items for early debt extinguishment and lower interest expense from debt reduction.  These items were partially offset by a $17 million negative impact from changes in foreign exchange rates.

Cash from operations during the December 2013 quarter was $1.2 billion, driven by the company’s December quarter profit and working capital initiatives, which were partially offset by the normal seasonal decline in advance ticket sales.  Cash from operations is net of a $250 million incremental contribution made by Delta to its defined benefit pension plans during the quarter.  The company generated $260 millionof free cash flow.

Capital expenditures during the December 2013 quarter were $900 million, including $835 million in fleet investments and $16 million for the purchase of 4 aircraft off lease. During the quarter, Delta’s net debt maturities and capital leases were $335 million.

Delta ended the quarter with adjusted net debt of $9.4 billion and the company has now achieved over $7.5 billion in net debt reduction since 2009.  This debt reduction strategy produced a $28 million year-over-year reduction in interest expense in the December quarter and a $153 million reduction for 2013.

Delta’s expectations for sustainable future profitability combined with its consistent and strong profitability over the past four years resulted in the reversal of the company’s tax valuation allowance in the December quarter.  The reversal of the tax valuation allowance resulted in a non-cash net gain of $8.0 billion in the December quarter.  Beginning in the March 2014 quarter, net income will be reduced to reflect a 39% tax rate; however, there will be no cash impact as Delta’s net operating loss carryforwards will offset cash taxes on more than $15 billion of future taxable income.

Delta recorded a $7.9 billion special items gain in the December 2013 quarter, including:

Delta recorded a $231 million special items charge in the December 2012 quarter, including:

Following are Delta’s projections for the March 2014 quarter:

AirTran Airways (Orlando and Atlanta) yesterday (October 13) officially unveiled the Atlanta Falcons logojet dubbed “Falcon 1”. AirTran intends to also paint logojets for the Baltimore Ravens and the Indianapolis Colts also of the NFL. Ironically AirTran does not fly the football team (its planes are too small). Instead the Atlanta Falcons charter larger aircraft from Delta Air Lines!

AirTran Airways (Orlando and Atlanta) will drop Charleston, SC and the ATL-CHS route on December 3.