LOT Polish Airlines will launch a new long-haul route from Budapest to Seoul (Incheon) on September 22, 2019.

The new route will be operated Boeing 787-8 Dreamliner aircraft three days a week. 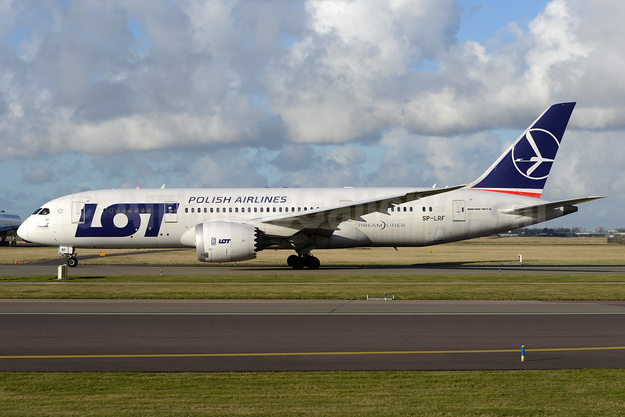 LOT Polish Airlines is planning to reopen the Warsaw – Delhi route on September 17, 2019.

The restored route will be operated five days a week with Boeing 787-8 Dreamliner aircraft according to Airline Route.

LOT Polish Airlines (Warsaw) on April 30 took delivery of its sixth new Boeing 787-8 Dreamliner, specifically the pictured 787-8 SP-LRF (msn 35942). The new 787 is named “Franek” which is Frank in Polish. The name was chosen as a result of an Internet contest. The airline issued this statement:

“Frank” (Franek in Polish) is the newest and sixth Dreamliner in the LOT Polish Airlines fleet that landed yesterday (May 1) at the Chopin Airport in Warsaw. The aircraft was named Frank as a result of an Internet contest. The name has been posted to the body of the aircraft and will appear until the end of the year.

“This year is special for us, full of changes and our Jubilee Year with our 85th anniversary,” said Barbara Pijanowska-Kuras, press officer for LOT Polish Airlines. “For our 6th Dreamliner delivery, we decided to organize a contest for the name of the aircraft numbered SP-LRF. The interest exceeded our wildest expectations. We are pleased this aircraft raises so many positive emotions.”

There was record interest in the Internet naming contest for the 6th LOT Dreamliner with 199,393 hits, 92,709 unique users and nearly 1,300 entries.

The Internet contest was held in March. The rules were simple–create an interesting name, justify your choice and become a “parent godfather” for this Dreamliner. Ms. Katarzyna Wąchała of Warsaw was the lucky winner. As a reward, she flew to visit the Boeing factory in Seattle. She returned to Poland today with her “baby”. She became the first long-distance passenger on the first flight of the youngest aircraft in the LOT fleet to Warsaw.

“The choice was difficult,” said Pijanowska-Kuras. “We wanted the name to arouse positive emotions, to be nice, short, easy to read and pronounce for foreigners, creative, intriguing and somewhat surprising. The choice was determined by the reasons given by the author. The registration number of this new aircraft is SP-LRF, so F is for Franek; F is also the 6th letter of the alphabet corresponding to LOT’s 6th Dreamliner; Franek in Polish is a timeless name; Franciszek is the name of two aces of the skies: Franciszek Peter and Franciszek Jacha and finally, it is also the name of Franciszek Zwirko – as Ms. Wachala wrote as her reasons for Franek.”

Franek will start to fly by mid-May on regular long haul connections in LOT’s network. The plane will be seen at airports in New York, Chicago, Toronto and Beijing. Beginning this winter season at the end of October, Franek may also visit other tourist places, such as Cuba, Sri Lanka, South Africa, Vietnam, Mexico or Thailand because LOT will begin long haul charter flights.

Since August 2103 when the fleet was joined by the fifth Boeing 787, LOT has been performing all long-haul flights only with Dreamliners. The Polish carrier was the first airline in Europe to operate this most modern world aircraft. Passengers appreciate the change in product quality and comfort of this machine. Given the company’s financial results and their year-to-year comparison in 2013, thanks to the Dreamliners, LOT gained as much as 95 million Zloty or $31,276,400. Business Class (Elite Club), perceived by passengers as the best on trans-Atlantic flights from Eastern Europe, has become increasingly popular. LOT has experienced huge success for its Premium Economy (Premium Club), between business and economy class. The Dreamliner also provides greater cargo business opportunities. LOT has also saved several million Zloty due to lower fuel consumption because from mid-2013, the long haul flights were flown by Dreamliners. At the end of 2017, the Polish carrier will have eight Dreamliners. The 7th Dreamliner will be delivered in the winter 2016/2017 and the 8th later during 2017.

The Dreamliner is a long-haul aircraft (12000 km) with a maximum cruising speed of 875 km / h, length of 57.72 m and a wingspan of 60.13 m. It has 252 passenger seats. The specially designed interior gives a feeling of spaciousness on board. Windows larger by ca 30% provide an excellent view, an appropriate pressure gives a greater sense of comfort, and the higher humidity as well as adequate filters ensure clean and healthy air. Luggage lockers are larger, and LED lighting system imitates daylight and adjusts to the time of the day. The special solution allows passengers to avoid turbulence and motion sickness.