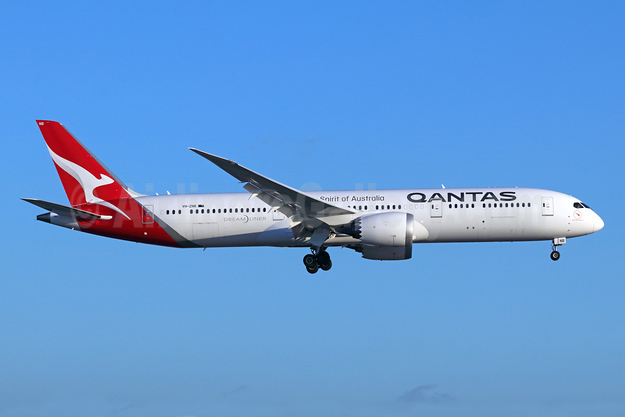 The QANTAS Group has reported an Underlying Profit Before Tax of $1.6 billion for the 2018 financial year – a record for the national carrier.

All parts of the business contributed to the result, helped by healthy levels of demand across key markets, higher revenue and a particularly strong performance in the domestic flying businesses of Qantas and Jetstar.

The result enables the Group to return further capital to shareholders, keep investing for customers and reward its employees with a cash bonus.

Chief Executive Officer Alan Joyce said the record profit reflected a strong market as well as the benefits of ongoing work to improve the business and build long-term shareholder value.

“These numbers show a company that’s delivering across the board,” said Mr Joyce.

“Our investment in free Wi-Fi and cabin improvements are delivering a better experience for customers as well as higher earnings for Qantas and Jetstar. The overall value for the travelling public remains extremely strong, with domestic sale fares almost 40 per cent lower in real terms than they were fifteen years ago.

“We’re seeing healthy demand across key sectors matched with improving levels of capacity discipline, which is a positive sign for the year ahead.

“This record result comes despite higher oil prices. We’re facing another increase to our fuel bill for FY19 and we’re confident that we will substantially recover this through a range of capacity, revenue and cost efficiency measures, in addition to our hedging program.

“Ultimately our success relies on the great service and dedication to safety from our people, which is supported by continuing to invest and innovate.

“We’re very pleased to reward our people with a bonus for this fantastic result. It brings the total amount set aside for non-executive employees to over $300 million over the past four years for their part in the Group’s exceptional performance,” added Mr Joyce.

The Group’s domestic flying operations delivered EBIT of $1.1 billion, which is 25 per cent higher than FY17 and represents a new record for the business.

This was achieved through the combination of Qantas and Jetstar’s network, schedule and product strengths in key markets, and supported by capacity discipline driving higher seat factors and higher unit revenue.

The Group maintained its corporate share, increased its share of small to medium enterprises, and saw a continuation of growth in the resources sector that began in the first half of the year. Demand was also boosted by flows from international partner airlines on to domestic services. Leisure demand remains strong and Jetstar carried 24 million passengers domestically and internationally for under $100.

Qantas International increased its earnings by 7 per cent to $399 million and maintained its margin in the face of strong competition and higher fuel prices.

Qantas International made several important structural changes during the year, including the introduction of the 787, new routes like Perth–London and taking on additional Trans Tasman flying for partner Emirates. These changes started delivering cost and revenue benefits in late FY18, which will continue through FY19 onwards.

Jetstar branded airlines in Asia were all profitable and continue to give the Group a capital-light foothold in key growth markets. The expansion of Qantas’ Singapore hub has been helped by traffic flows and onward connections with these airlines.

Qantas Freight continued to perform well, with the international market strengthening and the domestic market stable.

Qantas Loyalty achieved a record result of $372 million, up 1 per cent from the prior year. Margins dropped by 0.4 percentage points due to a mix of market conditions and bonus points promotions to support the launch of new financial products, but remained strong at 24.1 per cent.

The impact of interchange fee adjustments – which continued into the second half of the year – was mitigated by consumer demand for Qantas Points. While total growth in new credit cards issued in Australia shrank by 4 per cent, cards that earn Qantas Points grew at 7 per cent[2] (opens in new window), showing the value that points have in card acquisition.

The Frequent Flyer program grew by 4.2 per cent[3] (opens in new window) to reach 12.3 million members. Levels of member engagement increased, helped by the widening number of partners in the program and additional ‘opt-ins’ among Woolworths customers to earn Qantas Points.

There was continued revenue growth from new ventures, including health insurance and Qantas’ own premier credit card. Further expansion into financial services is planned in the first half of FY19.

The Group delivered against its financial framework in FY18.

Net free cash flow increased by $133 million, helping to push net debt below the low end of the preferred range. This gives future flexibility for earnings accretive investment and to continue rewarding shareholders.

The Group remains on track for a combined $3 billion in capital expenditure for FY18 and FY19 (net of asset sales), with $1.97 billion of this delivered in FY18. Ongoing transformation delivered $463 million of revenue and cost benefits.

Hedging helped minimise impact of fuel price increases during FY18, giving the Group time to adjust revenue settings to reflect increased costs. This has continued into FY19, with the first half of the year 87 per cent hedged.  Ongoing efficiency measures drove a 1 per cent reduction in fuel consumption and the same is expected in FY19.

Continued profitability saw Qantas exhaust the last of its available carry forward tax losses and incur company tax in the second half of FY18.

The Qantas Board has announced up to $500 million to be returned to shareholders. This comprises an increased, fully franked dividend of 10 cents per share to be paid on 10 October 2018 with a record date of 6 September 2018, as well as an on market buy-back of up to $332 million.

This will bring the amount of capital returned to Qantas shareholders to $3.1 billion since October 2015 and the total reduction in shares on issue to around 26 per cent.

INVESTING FOR THE FUTURE

Several major investments were announced during FY18, including six additional 787-9s for Qantas International, accelerated retirement of remaining 747s, a major upgrade of A380 cabins and 18 new A321LR NEOs for Jetstar.

Work on Project Sunrise – which will unlock direct flights from the east coast of Australia to London and New York by 2022 – advanced to the request for proposal stage with Airbus and Boeing. And several lounge upgrades were announced, underway or completed.

Qantas has today announced an extension of its global lounge upgrade program, designed to support demand for premium travel across six additional ports. They are:

The Qantas Group has today also committed to a second Pilot Academy facility, which will help meet the unprecedented global demand for skills as the aviation sector continues to grow. The academy concept is designed to provide a future talent pipeline for Qantas Group airlines and support General Aviation in a country that relies heavily on air transport. It also represents a commercial opportunity to create a centre of excellence to train pilots for airlines throughout the region.

The concept has been met with substantial levels of support from state governments, local councils and the private sector. (See separate release.)

Qantas has set aside a total of $20 million towards establishment of the two facilities. Both will be located in regional Australia, with cities to be announced in coming weeks. The first location will open during calendar year 2019 and the second expected to follow in 2020.

Qantas has also committed to delivering up to $3 million to regional communities as part of its drought assistance program.

The strength of forward bookings and continued focus on transformation provides confidence that the Group will substantially recover higher fuel costs in FY19. This is supported by capacity discipline and fundamental strengths of our dual brand strategy in the domestic market, combined with margin advantage and fleet investment in the international market.

The Group’s current operating expectations for FY19 are: 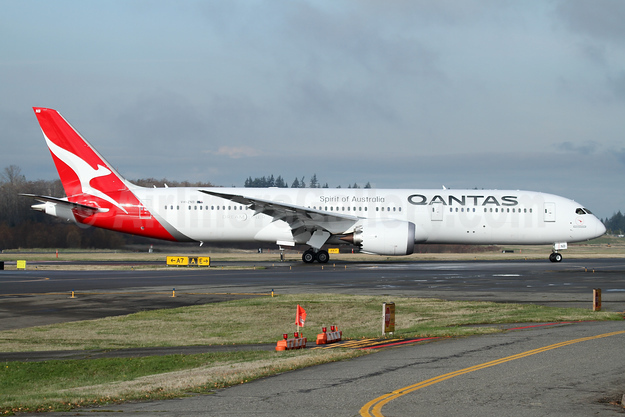 QANTAS Airways (Sydney) on December 15, 2017 revealed the name of its second Dreamliner, and announced a new route, ahead of the aircraft’s first scheduled international flight.

QANTAS International CEO Alison Webster was joined by the Victorian Minister for Tourism and Major Events, John Eren, at QANTAS’ engineering base in Melbourne to mark the naming as well as the Dreamliner’s first passenger service to Los Angeles.

Often called Australia’s unofficial national anthem, Waltzing Matilda was one of the 45,000 suggestions received from the public to name the airline’s new fleet of eight Dreamliners.

“Banjo Paterson is said to have written Waltzing Matilda while working on a cattle station in the outback Queensland town of Winton, which was also the birth place of QANTAS 25 years later,” Ms Webster said.

“The Melbourne-Los Angeles flight was the first international service that we put our very first Airbus A380 on in 2008, so there’s a nice symmetry with this being the first for our Dreamliner as well,” added Ms Webster.

The QANTAS Dreamliner will initially operate six days a week on the 14-hour flight between Melbourne and Los Angeles, complementing the existing daily Airbus A380 service between the two cities.

QANTAS today also announced an all-new route to be operated by the Dreamliner, with the introduction of Melbourne to San Francisco service. The route will be on sale from early 2018 with flights expected to start by late 2018. Capacity between Melbourne and the US will be rebalanced to match demand for the two Californian cities, meaning that the Dreamliner will fly to Los Angeles some days of the week and San Francisco other days.

The QANTAS Dreamliner features 236 seats across three cabins including the acclaimed Business Suite, nicknamed “mini First Class” by some frequent flyers, as well as a next generation Premium Economy seat and a significantly improved Economy seat with extra storage compartments and device charging outlets.

QANTAS has so far taken delivery of two Boeing 787-9s. The arrival of its third and fourth aircraft early next year will enable the national carrier to start its historic Perth-London (Heathrow) flight, which originates in Melbourne. All eight aircraft will be delivered by the end of 2018, with half based in Melbourne and half based in Brisbane.

Earlier this year, QANTAS revealed all eight Dreamliner names; Great Southern Land, Waltzing Matilda, Great Barrier Reef, Skippy, Boomerang, Quokka, Uluru and Dreamtime. The sequencing of the names is being announced as the aircraft are delivered.