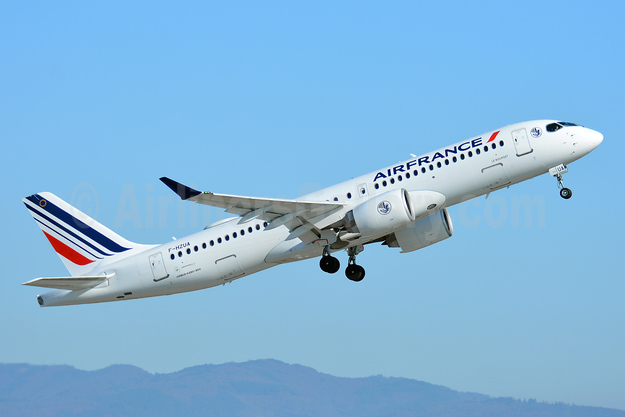 On October 31, 2021, Air France’s Airbus A220-300 welcomed its very first customers, with two flights from Paris-Charles de Gaulle to Berlin (Germany) and Venice (Italy). These flights were operated by the Airbus A220-300 “Le Bourget”, which was delivered to the airline at the end of September and is the first of 60 aircraft ordered by Air France to progressively replace its Airbus A318s, A319s and some A320s by the end of 2025.

Over the next few days, the Airbus A220-300 will be rolled out on routes to Barcelona and Madrid (November 1), as well as Milan-Linate (November 6). During the 2021-2022 winter season, the aircraft will gradually expand its network to Bologna, Rome (Italy), Lisbon (Portugal) and Copenhagen (Denmark) as new aircraft are delivered.

The highest level of in-flight comfort

The Air France Airbus A220-300 has 148 seats, in a 3-2 seat configuration (5 seats across) offering 80% of customers a window or aisle seat. Up to eight rows at the front of the aircraft can be dedicated to Business class customers, who have an empty seat next to them and enjoy priority boarding and deplaning.

Its leather reclining seats – the widest on the market at 48 cm – are equipped with USB A and C sockets, a solid tray table, a cup holder and a tablet or smartphone holder integrated into the backrest.

The aircraft is equipped with the latest innovations, with large panoramic windows, mood lighting to accompany the different phases of the flight, and spacious baggage compartments for easier access. It is equipped with Air France Connect, the airline’s Wi-Fi offer, which is accessible throughout the flight and offers three passes, including one that is free of charge for sending and receiving messages during the flight.

The catering offer is adapted to the flight time and depends on the time of departure. In the Business cabin, each customer is served a generous breakfast or cold meal signed by François Adamski, Servair corporate chef, Meilleur ouvrier de France and Bocuse d’or. A range of wines and champagnes chosen by Paolo Basso, world’s best sommelier in 2013, and a wide selection of hot and cold drinks complete the package. In the Economy cabin, biscuits or sandwiches including a vegetarian choice are available. A wide range of alcoholic and non-alcoholic beverages is also available.

The latest jewel in Air France’s medium-haul fleet, the Airbus A220-300 is the most innovative and efficient single-aisle aircraft in its category. It embodies Air France’s commitment to improving its economic and environmental performance, with a cost reduction per seat of 10% compared to the aircraft it replaces and unrivalled energy performance, a 20% reduction in CO2 emissions and a 34% reduced noise footprint.

These characteristics will play a decisive role in reducing Air France’s environmental footprint and achieving its sustainable development objectives. By 2030, the airline will have reduced its overall CO2 emissions per passenger/km by 50% compared to 2005, or 15% in absolute terms. Air France is also committed to working with all its stakeholders and the public authorities to achieve the climate target of zero net CO2 emissions by 2050.

The renewal of the fleet is the main source of decarbonization available in the short term. Air France invests 1 billion euros every year to integrate the latest generation aircraft, Airbus A350-900 on long-haul routes and Airbus A220-300 on short and medium-haul routes, with a reduction in CO2 emissions of between 20 and 25%.

It's D-day. This morning sees the first commercial flight of our new A220 to Berlin. Let's relive in pictures all the first times that marked this event!✈️ pic.twitter.com/34jB4XtMxB