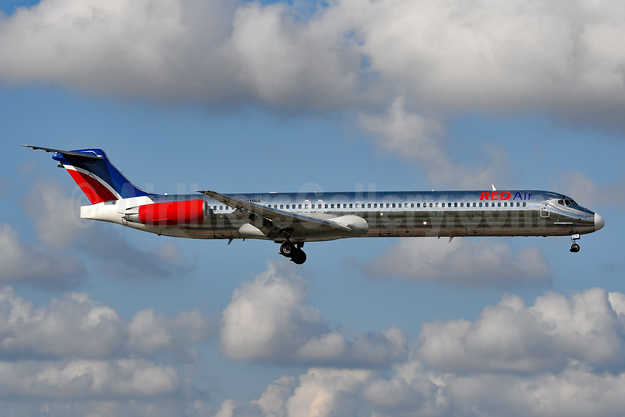 The aircraft made a hard landing, the nose gear reportedly collapsed and the aircraft veered off the runway impacting some signage. The aircraft caught on fire and burned. Minor injuries to three people while evacuating.

The two southern runways at MIA are closed.

The airframe was originally delivered to American Airlines as N16545 on December 18, 1990.

The aircraft is a probable insurance write off (WO) due to the damage and fire.

#BREAKING: A plane arriving from Santo Domingo at Miami International Airport caught on fire after its landing gear collapsed.https://t.co/MS3RvIQb2J

Three people were hospitalized with minor injuries after the landing gear of a Red Air flight from the Dominican Republic collapsed as it landed at the Miami International Airport, a spokesman says https://t.co/WOb901SFGZ

Multiple Emergency crews are currently at the scene as Red Air aircraft catches fire as its landing gear collapsed after landing at Miami International Airport All passengers been evacuated pic.twitter.com/3D8Ioak9kn

A Red Air plane's landing gear collapsed and caught fire when it touched down in Miami international airport earlier. 3 people injured. There were 126 people on board.#miami pic.twitter.com/3PxyeYYKbM