Tigerair and Cebu Pacific Air, the largest budget carriers based in Singapore and the Philippines respectively, have announced plans to enter into a strategic alliance. Both parties will collaborate commercially and operationally on international and domestic air routes from the Philippines, thereby creating the biggest network of flights to the region.

The alliance will enable both parties to leverage their respective strengths and harness synergies to enhance their network coverage, flight frequencies and customer service, and jointly market their routes using interline arrangement.

Subject to regulatory approval, the interline partners will jointly operate common routes between Singapore and the Philippines. As part of the strategic alliance, Tigerair will divest its 40% stake in Tigerair Philippines to Cebu Pacific.

Group CEO of Tigerair Mr Koay Peng Yen said, “Tigerair and Cebu Pacific share a vision for both airlines to join forces and create the largest budget airline network between Asia and the Philippines. This partnership with Cebu Pacific is consistent with our asset-light strategy, and builds upon our other alliances. We also look forward to achieving greater cost savings from the coordinated operations while providing more travel options and greater convenience for our customers.”

President and CEO of Cebu Pacific Mr Lance Gokongwei said, “This strategic alliance will allow both Cebu Pacific and Tigerair to leverage our extensive networks spanning from North Asia, ASEAN, Australia, India, all the way to the Middle East. Our customers can expect an even wider range of travel options, and seamless travel connections while enjoying our trademark low fares.”

RAK Airways (rakairways.com) (Ras Al Khaimah) has again suspended operations as of today (January 1) as it restructures. The airline issued this statement today:

UAE’s RAK Airways announced today (January 1, 2014) the suspension of all operations starting on January 1, 2014 until further notice. In a written statement today, the airline said, ‘The decision for suspending operations was taken following increased pressures on the carrier’s performance due to continuous market conditions, increased operating costs and the impact of the regional political instability on the overall aviation industry.’.

‘‘The board of directors took the decision today to suspend the operations until further notice. We believe this decision is in the best interest of the airline and its shareholders. We will take this time to re-evaluate the best options available for RAK Airways future as well as those that  fit the industry requirements of the emirate of Ras Al Khaimah.”

RAK Airways regrets the inconvenience caused to its customers as a result of this decision. All passengers who have made bookings with RAK Airways will be re-booked on alternative airline or receive full refund for any payments made.

The UAE airline originally launched scheduled passenger operations on November 29, 2007. The airline suspended all operations in 2009, reorganized and resumed operations on October 10, 2010. This is the second suspension of services.

The airline is vowing to reorganize and relaunch operations at a later date.

Copyright Photo: Rainer Bexten/AirlinersGallery.com. RAK Airways (rakairways.com) Airbus A320-214 A6-RKC (msn 2158) is seen at the RKT hub (all others by RAK Airways).

As a result, Aegean Airlines will commence four flights a week service between Athens and Abu Dhabi starting on March 30, 2014 and, subject to regulatory approvals, Etihad Airways will place its EY flight code on the new flight.  Aegean Airlines will operate its new Athens-Abu Dhabi service with a 168-seat Airbus A320 aircraft.

Beyond Athens, Etihad Airways will also place its flight code on Aegean-operated flights to 16 Greek destinations, and to a further 10 cities across Europe.

In other route news, Aegean will restore a route to Hamburg starting on May 27. The route will be operated three days a week.

Indigo Partners has announced that, through an affiliate, it has completed the acquisition of Frontier Airlines from Republic Airways Holdings on December 3, 2013. Final terms of the transaction, which was first announced on October 1, 2013, are not being disclosed.

Indigo Partners and its principals, led by managing partner William A. Franke, have considerable experience in successful, airline-related investments.

“Today is an exciting day for Frontier Airlines and Indigo Partners, as we can now embark on a new chapter in Frontier’s history of providing safe, reliable and fairly priced air service,” said Franke. “As air travel costs have moved higher, demand has grown for more affordable options and more choices. One key element to Frontier’s future success will be operating as an ultra low cost carrier that offers low fares. This model, coupled with the Frontier touch, will ensure opportunities for the Frontier team, and provide safe and reliable ULCC air service to our communities and beyond as we grow Frontier under this vision.”

David Siegel, CEO and President of Frontier Airlines, resigned from Republic’s Board of Directors.

Indigo Partners is a private equity firm established by W. A. Franke in 2003 to pursue acquisitions and strategic investments in the air transportation and related industries. The firm was a significant investor in Tiger Airways based in Singapore and Spirit Airlines based in Ft. Lauderdale, Florida, and maintains lead investments in Wizz Air Holdings, Plc, a ULCC with multiple bases in Central and Eastern Europe and Volaris Airlines, a ULCC based in Mexico City. Indigo Partners is headquartered in Phoenix, Arizona.

Republic Airways Holdings, based in Indianapolis, Indiana, is an airline holding company that owns Chautauqua Airlines, Republic Airlines and Shuttle America. The airlines operate a combined fleet of more than 250 aircraft and offer scheduled passenger service on over 1,300 flights daily to more than 110 cities in the U.S., Canada and the Bahamas through fixed-fee flights operated under airline partner brands, including American Eagle, Delta Connection, United Express, and US Airways Express. The airlines currently employ approximately 6,000 aviation professionals.

Copyright Photo: Mark Durbin/AirlinersGallery.com. Indigo Partners is likely to keep the popular animals on the tails which plays well on their TV advertisements in the main Frontier markets, giving names to the talking tails. However the new very bold FLYFRONTIER.COM titles as displayed on Airbus A320-214 N220FR (msn 5661) with Sharklets may not survive. It will be interesting to watch for any changes to the current Frontier strategy by these low-fare airline investment fund people.

Thai Airways International (Bangkok) is now planning to totally spin off its Thai Smile (Bangkok) subsidiary into a totally independent carrier. Thai Smile will acquire its own AOC, code and will change its name to Thai Smile Airways Company according to Travel Daily News.

Copyright Photo: Michael B. Ing/AirlinersGallery.com. Airbus A320-232 HS-TXB (msn 5248) climbs away from the Bangkok Suvarnabhumi Airport hub. The airline once its goes independent is likely to lose the Thai colors and tail in its livery.

Belle Air Europe (subsidiary of Belle Air) (Ancona, Italy and Pristina) followed the lead of its parent organization and ceased all operations the next day on November 26. 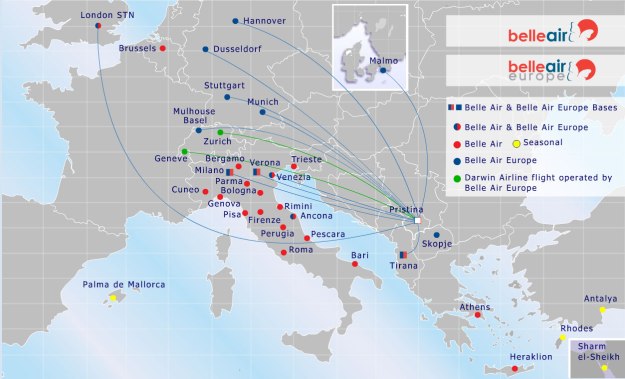 Alitalia (2nd) (Rome) according to Reuters, has failed so far to raise the 300 million euros ($407 million) (only 173 million euros received) in its emergency cash call. The flag carrier is now facing stiffer competition as other airlines move in to add new routes from Italy sensing the emergency. Alitalia will need to find a strategic carrier very quickly that is willing to invest in a failing airline and turn it around. So far Etihad Airways (Abu Dhabi), the savior of struggling airlines, has avoided Alitalia.

Air France-KLM, which owns 25 percent, refused to put in any more capital because it stated the rescue plan was not drastic enough to save the airline.

This is the second version of Alitalia, saved once before from the first failing Alitalia. Is there a third?

Aegean Airlines (Athens) will start a new route, three days a week, between Athens and Copenhagen starting on May 22, 2014. The new route will be operated with Airbus A32os. The Copenhagen route is part of an overall expansion plan in 2014 (see below).

Previously on October 31 Aegean outlined its future plans now that Olympic Air has been acquired:

Aegean Airlines presented the benefits, arising from the acquisition of Olympic Air, for the company, the passengers, the society and the Greek tourism, as well as its overall strategy, during a press conference held on October 31 in Athens.

In the immediate period of the next 6 to 14 months, following the acquisition of Olympic Air, the resulting synergies will lead to an enhanced fleet and an immediate expansion of the network, to the enhancement of the connectivity in Greece and abroad, as well as to cost savings from the consolidation of Administrative Services, with benefits saving up to €35 million annually.

Aegean’s objective and commitment is to pass these benefits to the passengers with more competitive rates, enhancement of privileges for loyal customers of both companies and network expansion.

In terms of benefits arising regarding the prices, Aegean has already announced the launch of two new categories of fares in economy class, the GoLight and Flex fares, with prices starting from €24 to Athens, which ensure money-saving and unlimited flexibility respectively. These new fares will be offered to Olympic Air’s passengers from February 2014.

Moreover, following a recent meeting with representatives of the Greek region, the company announced a package of initiatives to support the remote areas of Greece, by integrating the second lowest fare of €39 from/to remote areas in order to boost the demand, by introducing new charges for the connection between the remote islands and abroad with a significant reduction in travel cost up to €140, as well as by increasing capacity during July – September, at no additional cost to the state, where it is commercially and operationally feasible.

Aegean will make dynamic start in 2014 also in terms of its network, with a further expansion of international destinations and new routes.

Analytically, Aegean announced the addition of 15 new destinations from Athens in 2014, reaching to 47 overall international destinations from Athens. Specifically the new destinations include: Birmingham in England, Marseille and Nantes in France, Zurich in Switzerland, Hamburg, Hanover and Nuremberg in Germany, Copenhagen in Denmark, Catania in Italy, Abu Dhabi in the United Arab Emirates, Beirut in Lebanon and Paphos in Cyprus, as well as four additional cities including Stockholm, Sweden or Oslo in Norway, Ljubljana in Slovenia, Dubrovnik in Croatia.

Overall in 2014, 45 to 50 new routes will be added from the eight bases of the company in Athens and in the Greek region, including the new base in Chania.  As a result, Aegean and Olympic Air will jointly cover in 2014 a network of more than 250 routes, of which 205 or more are international routes and 47 to 50 domestic routes.

The progress so far and the development of Aegean is based on collaborative effort and support by six major business groups (Vassilakis, A & P Laskarides Constantakopoulos A., D. Ioannou, G. David, Piraeus Bank) and 52,000 shareholders who continue to support the company into its dynamic new course that appears after the acquisition of Olympic Air.