Lufthansa (Frankfurt) has announced it will fly from Munich nonstop to the largest and best-known winter sports center in Finland for the first time. From December 19. 2015, Lufthansa will be taking off every Saturday for Kittilä, nearby to the ski resort at Levi. Until March 26, 2016, the winter seasonal route to Lapland will be operated with an Airbus A320 with 168 seats.

In other route news, Lufthansa will operate this summer from Munich to Glasgow with Airbus A319s starting on May 16. The route will operate one day a week. 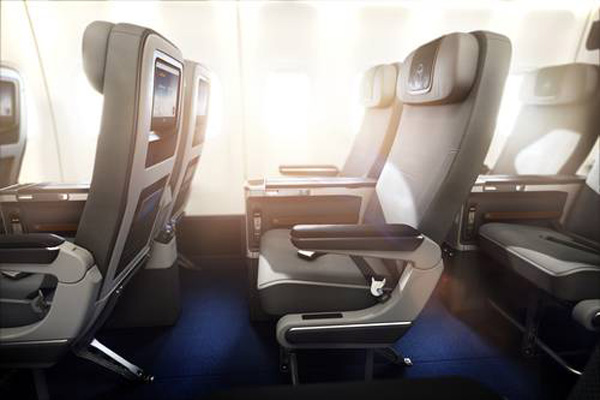 In other news, Lufthansa Technik completed the installation of Premium Economy class seats (above) on an Airbus A340-300 with the registration of D-AIGO. Thus, a total of 53 aircraft now offer the extra comfort in Economy Class on approximately 2,000 new, well-equipped seats. Passengers can thus already enjoy the airline’s new travel class on half of all long-haul jets.

The retrofit order is carried out according to the type of aircraft. Therefore, all Boeing 747-8 and Airbus A380 aircraft on routes from the Frankfurt hub already have Premium Economy on board. A total of 15 of the Airbus A340-600 aircraft stationed in Munich and the A340-300 aircraft in Dusseldorf also feature the new seats.

Lufthansa‘s (Frankfurt) 5,400 pilots, represented by the union Vereinigung Cockpit (VC), have voted by more than 90 percent to strike if necessary according to Reuters. No date has been set.

Lufthansa is restructuring under its SCORE program and trying to lower costs.