The regularly scheduled Hainan Airlines flight – which carried more than 100 passengers from Shanghai to Beijing in a Next-Generation 737-800 – used biofuel made by Sinopec from waste cooking oil collected from restaurants in China. Both of the airplane’s CFM International CFM56-7B engines were powered by a fuel blend of approximately 50 percent aviation biofuel mixed with conventional petroleum jet fuel.

Sustainably produced biofuel, which reduces carbon emissions by 50 to 80 percent compared to petroleum through its lifecycle, is expected to play a key role in supporting aviation’s growth while meeting environmental goals. The Boeing Current Market Outlook has forecast that China will require 6,020 new airplanes by 2033 to meet fast-growing passenger demand for domestic and international air travel. 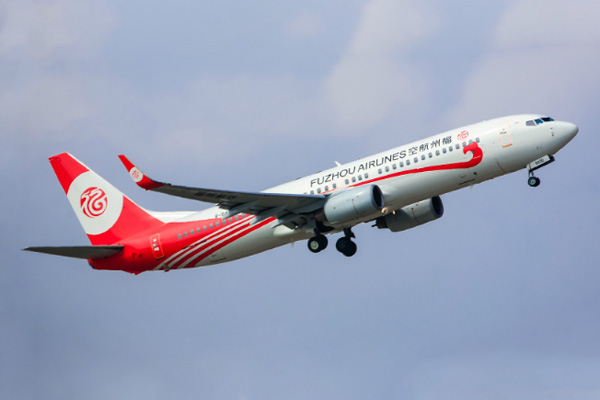 The airline received its AOC on October 17.

Urumqi Air (Urumqi, Xinjiang) is a new airline in China. The new airline is a joint venture between the HNA Group and the state-owned Urumqi Urban Construction Investment Company Limited.

Urumqi Air will be based at Ürümqi Diwopu International Airport, in the capital of Xinjiang in the remote northwest part of China (please see map above).

Urumqi Air took delivery of Boeing 737-84P B-2157 (msn 32600) from Hainan Airlines on August 20 which will provide the technical support and three leased Boeing 737 aircraft for the new carrier. The parent HNA Group will control 70 percent of the stock. Operations are due to start now on August 29, delayed from August 15.

The logo “integrates the three-color Adlai silk and flying dove, which highlights the geographical reputation of Xinjiang Uygur Autonomous Region, symbolizing peace and friendship” according to wcarn.com.

Hainan Airlines (Haikou), the first airline in China to operate with Aviation Partners Boeing Blended Winglets, has committed to equip all future 737-800 aircraft deliveries with winglets. Hainan has currently 45 Boeing aircraft on order.