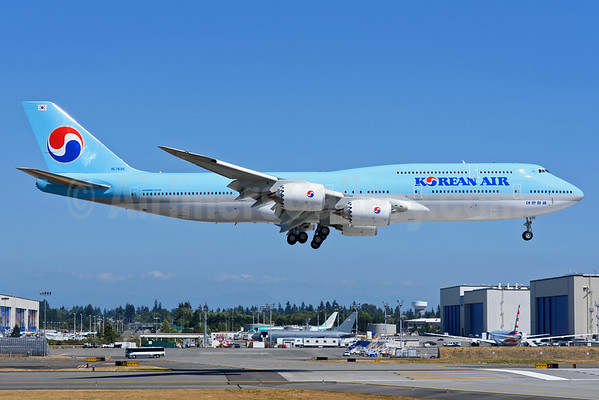 Korean Air (Seoul) and Boeing (Chicago, Seattle and Charleston) yesterday (August 25) marked the delivery of the airline’s first 747-8 Intercontinental. The new fuel-efficient jet is the first of 10 747-8 passenger airplanes the carrier has on order.

Top Copyright Photo: Royal S. King/AirlinersGallery.com. The pictured Boeing 747-8B5 HL7630 (msn 40905) was handed over to the carrier on August 25. The Jumbo is seen landing after a test flight at Paine Field near Everett, WA.

With this delivery, Korean Air becomes the first airline in the world to operate both the passenger and freighter versions of the 747-8. Korean Air currently operates seven 747-8 Freighters.

With a range of 7,730 nautical miles (14,310 km), the 747-8 Intercontinental offers 16 percent savings in fuel consumption and emissions over its predecessor, the 747-400, while generating 30 percent less noise. The airplane also features an all-new, 787 Dreamliner-inspired interior that includes a new curved, upswept architecture giving passengers a greater feeling of space and comfort.

Korean Air’s jet is configured with 368 seats and features the brand new First Class Kosmo Suite 2.0, which include a sliding door and higher partitions to provide added privacy for passengers. The suites are also equipped with updated in-flight entertainment systems, with large 24-inch high-definition monitors and new handheld touch remotes.

Korean Air’s Aerospace Division is a key Boeing partner on both the 747-8 and 787 programs, supplying the distinctive raked wing-tips for each model. They are also one of two suppliers producing the new 737 MAX Advanced Technology (AT) Winglet.

Korean Air, with a fleet of 161 aircraft, is one of the world’s top 20 airlines, and operates more than 430 flights per day to 128 cities in 45 countries. It is a founding member of the SkyTeam alliance, which together with its 20 members, offers its 612 million annual passengers a worldwide system of more than 16,000 daily flights covering 1,052 destinations in 177 countries.

Below Photo: Boeing. The staircase to the Upper Deck.

Korean Air (Seoul) is already a Boeing 747-8F Intercontinental freighter operator. The flag carrier will soon to be welcomed to the 747-8 Intercontinental passenger club with the pending delivery of its first copy (above). The company has 10 Super Jumbos on order and will replace their older Boeing 747-400s with new type. The older 747-400s will be phased out by 2017.

Like Lufthansa, Korean Air will soon operate both the Airbus A380 and the Boeing 747-800.

Copyright Photo: Joe G. Walker/AirlinersGallery.com. The first, the pictured Boeing 747-8B5 HL7630 (msn 40905), taxies into position on the runway at Paine Field near Everett for a test flight.