Air Europa faces the summer with the resumption of its routes to Athens and Alghero, with both expanding its network in Europe by operating in high season in a total of 35 European and national destinations, and in another 20 in America.

It will be in June when the airline opens its route to Athens, operated with its most modern and efficient fleet, the Boeing 787 Dreamliners, which combine the highest environmental performance with maximum comfort.

The company, which will cover this route until the end of October, will link the Madrid hub with the Greek capital two days a week, specifically on Wednesdays and Sundays; and makes more than 28,000 seats available to the customer, exceeding the capacity offered in the summer of 2019.

A month later, in July, Air Europa will open its second summer destination heading to Alghero, on the island of Sardinia, where it will also fly twice a week, on Thursdays and Saturdays. Open until the beginning of September, the route will connect Madrid with this city in northwestern Sardinia with more than 30 flights.

With Athens and Alghero, Air Europa expands its presence in Europe during the summer and reinforces the expansion announced and initiated by the airline last April, and which is based on a notable increase in sales since the end of last year.

Over the next few months, Air Europa will increase its offer with the incorporation of eleven new aircraft, five of them Boeing 787 Dreamliner and six Boeing 737, with which it advances in its fleet unification process that allows it to increase the number of seats per plane, optimizing the number of flights and increasing the offer in both economy and business class.

At the end of the year, the long-haul fleet will be the same as in 2019 and Air Europa will now fly to its 23 destinations on the American continent.

Iberojet has signed a new interline agreement with Air Europa.

The new agreement will allow Iberojet to connect its long-range flights with Air Europa’s Spanish and European network.

International Airlines Group (IAG)’s quest to acquire Air Europa is not lost. IAG is still in the game. IAG is providing a lifeline to Globalia, the owner of Air Europa.

In return, IAG will have the option to trade the loan into a possible 20 percent share of Air Europa.

The deal is conditional on the approval from syndicated banks.

IAG and Globalia are advanced talks to undo the previously-agreed plan to acquire Air Europa according to Reuters.

The CMA is considering whether it is or may be the case that this transaction, if carried into effect, will result in the creation of a relevant merger situation under the merger provisions of the Enterprise Act 2002 and, if so, whether the creation of that situation may be expected to result in a substantial lessening of competition within any market or markets in the United Kingdom for goods or services.

ITA Airways and Air Europa have signed a broad codeshare agreement connecting the networks of the two airlines. Thanks to this commercial partnership, which starts today 8th November 2021, ITA Airways will increment its operations and commercial offer on Spain and Canary and Balearic Islands.

Customers will have more options and better flight schedules when traveling through the two airlines’ hubs in Rome and Madrid. Following this agreement, ITA Airways’ and Air Europa’s customers can now fly seamlessly to their desired destination with a single ‘unique’ ticket, checking-in at the airport of departure, and collecting their checked-through baggage at the end of their trip in the arrival airport. ITA Airways will apply its ‘AZ’ code on services operated by Air Europa between Italy and Spain. Similarly, Air Europa will code share AZ flights between Barcelona, Madrid and Rome, connecting Italian domestic services beyond Rome Fiumicino Airport and selected connecting international services.
Marco Finelli reporting from Italy.

“Globalia will seek to reach an alternative furlough agreement with its unions should the Spanish government not extend its COVID furlough program, which will expire at the end of this month.”

From July we will operate 87% of the routes to America, with flights to Miami, New York, Panama, Salvador de Bahia etc.

From our hub in Madrid we will connect with 11 European destinations and more than 20 Spanish domestic destinations. 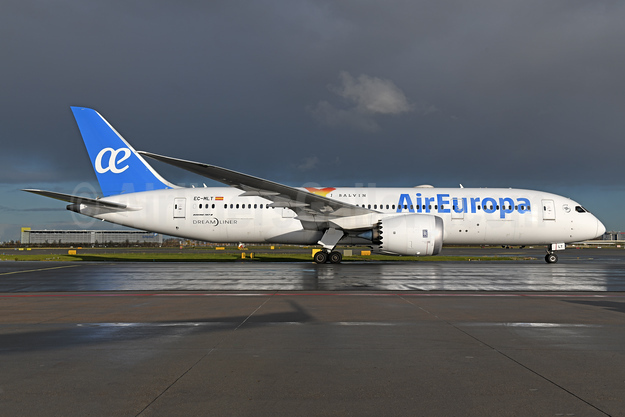 Air Europa is recovering its flight network with the US and from next June will fly aboard its most modern and efficient fleet, the Boeing 787 Dreamliner,to Miami and New York.

With three weekly frequencies, specifically on Tuesdays, Thursdays and Saturdays; Air Europa will resume its flights to Miami on June 12, and resume its operation to New York on June 25 also with three flights a week : Wednesdays, Fridays and Sundays.

Air Europa’s return to its U.S. destinations is due to its commitment to progressively increase connectivity and flight options to its passengers, as restrictions are removed and whenever maximum safety conditions are ensured.

Air Europa will fly to Miami and New York with its Dreamliner fleet, the most efficient aircraft of how many exist on the market, capable of reducing flight time by 45 minutes and reducing gas emissions by 20% compared to any other aircraft of similar size. In addition, the Dreamliner fleet has HEPA or high-efficiency filters, which are used in hospital environments, and are capable of capturing virus-containing particles with an efficiency of more than 99.9%.

IAG, its Spanish unit Iberia and Air Europa owner Globalia declined to comment on Friday on the El Confidencial report, which cited unnamed sources saying that the deal was on Thursday at half the original offer price.

After originally agreeing to buy Air Europa for 1 billion euros in November 2019, IAG but has been pushing to cut the price as the coronavirus pandemic threw the airline industry into crisis.”

Previously on November 4, 2019 IAG made this announcement:

International Consolidated Airlines Group (“IAG”) and Globalia (“Globalia”) are pleased to announce that definitive transaction agreements have been signed under which IAG’s wholly owned subsidiary, IB OPCO Holding S.L. (“Iberia”), has agreed to acquire the entire issued share capital of Air Europa (“Air Europa”) for €1 billion to be satisfied in cash at Completion (the “Acquisition”) and subject to a closing accounts adjustment.

IAG has a strong track record of successful acquisitions, most recently with the acquisition of Aer Lingus in 2015 and we are convinced Air Europa presents a strong strategic fit for the group.”

“This is of strategic importance for the Madrid hub, which in recent years has lagged behind other European hubs. Following this agreement, Madrid will be able to compete with other European hubs on equal terms with a better position on Europe to Latin America routes and the possibility to become a gateway between Asia and Latin America.”

Air Europa is one of the leading private airlines in Spain, operating scheduled domestic and international flights to 69 destinations, including European and long-haul routes to Latin America, the United States of America, the Caribbean and North Africa. In 2018, Air Europa generated revenue of €2.1 billion and an operating profit of €100 million. It carried 11.8 million passengers in 2018 and ended the year with a fleet of 66 aircraft.

The Board of IAG believes that the transaction would:

The Air Europa brand will initially be retained and the company will remain as a standalone profit centre within Iberia run by Iberia CEO Luis Gallego. The managements of IAG and Iberia anticipate opportunities to unlock value through the Acquisition across three key areas:

The Acquisition is expected to generate cost synergies across selling, general and administrative expenses, procurement, handling and distribution costs with full run-rate synergies to be achieved by 2025. IAG expects implementation costs to be phased over the same period.

In addition, the Acquisition is expected to generate significant revenue synergies by 2025, including:

The Acquisition is expected to be earnings accretive in the first full year following Completion and accretive to IAG’s return on invested capital within four years after Completion.

The Acquisition will be funded by external debt. After Completion, IAG’s net debt to EBITDA is expected to be 0.3 times higher as a result of the Acquisition compared to 1.2 times last reported at the end of Q3 2019.

Assuming satisfaction of all conditions to the Acquisition, Completion is expected to take place in 2H 2020.

IAG has agreed to pay Air Europa a break fee of €40 million in the event that the transaction fails to receive the necessary regulatory approvals and either party elects to terminate the transaction agreement.

IAG reinforced its leadership positions in its home markets of London, Madrid, Barcelona, Dublin and Rome with the addition of 48 new routes.

British Airways operates the most comprehensive network between Europe and North America. Following new route announcements to Pittsburgh and Charleston, soon they will serve 34 destinations, consolidating their position as the largest longhaul carrier into North America by points served. They had great success in opening routes to markets such as Austin, New Orleans and Nashville and will look for further opportunities in the US. As they develop the longhaul network further, their relationship with joint business partners will remain critical in offering customers better frequency and easier connections in the markets they serve. 2019 will see them launch new services to Islamabad and Osaka as we continue to expand their presence elsewhere in the world.

Iberia increased overall capacity by 7 per cent with expansion across its network. In longhaul it launched services to San Francisco. A major milestone was reached in its efforts to build a strategic alliance with LATAM, with the Chilean Free Competition Defence Court approving their proposed joint business. Iberia used Iberia Express to strengthen its network, adding four new destinations.

The LEVEL brand was selected as the brand to launch IAG’s new shorthaul operations from Vienna, operating 14 shorthaul routes to a mix of European destinations including London, Paris, Barcelona, Ibiza, Milan, Larnaca and Dubrovnik. Longhaul LEVEL services also launched from Paris to the French Caribbean, Montreal and New York.

Vueling strengthened its positions in key markets by 3 points of market share in Barcelona and Spain-Canaries and 4 points in Spain-Balearics. We also maintained capacity discipline and flexibility to quickly adjust to future headwinds.