Delta Air Lines (Atlanta) has made the following announcement:

Delta customers can now book and pay for flights via Apple Pay, the easy and private way to pay that the company says is safer than credit cards, using the latest version of the Fly Delta app. Delta is the first U.S.-based airline to allow its customers to purchase tickets using Apple Pay, making the booking process even faster and easier for iPhone users.

Purchasing tickets using Apple Pay within the Fly Delta app is as simple as the touch of a finger and users will continue to receive all of the rewards and beneﬁts offered by their credit and debit cards.

This latest feature to the Fly Delta app is just one of many digital improvements designed to elevate the overall customer experience.

“Our Fly Delta app has come a long way since it was first introduced in 2010. More than 18 million customers have now downloaded the Fly Delta app and we are excited to be the first U.S.-based airline to allow our customers to book and pay for their tickets with Apple Pay. By providing a way to pay for flights with just the touch of a fingertip, Delta continues to optimize our robust mobile channels and provide an easy-to-use and seamless digital experience for our customers,” said Rhonda Crawford, Vice President – eCommerce.

Security and privacy are at the core of Apple Pay. When customers add a credit or debit card to Apple Pay, the card numbers are not stored on the device or on Apple servers and each transaction is authorized with a one-time unique dynamic security code. 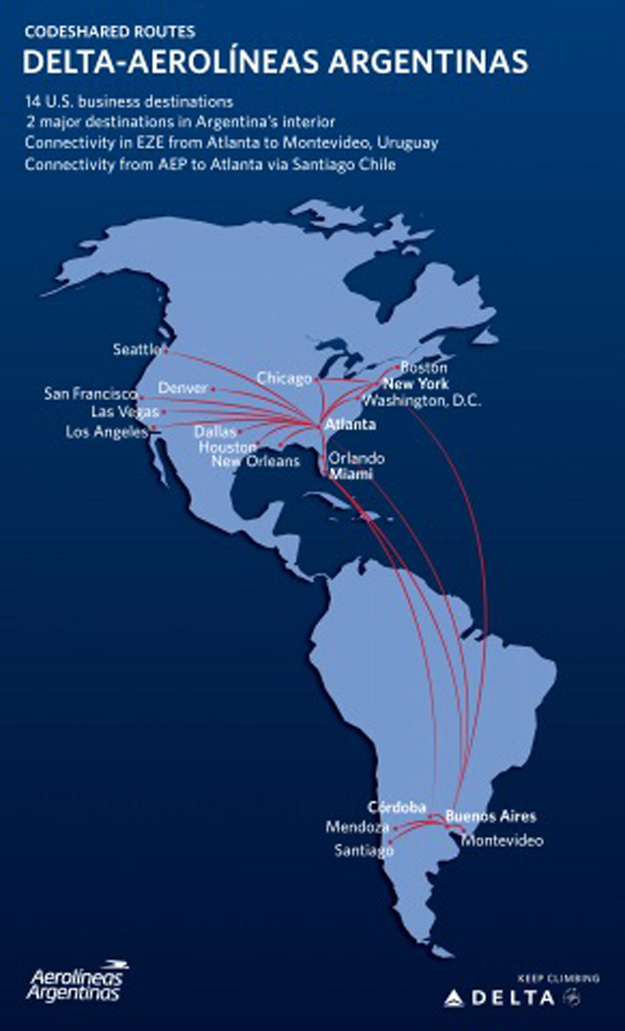 In other news, Delta has also announced a codeshare agreement with Aerolíneas Argentinas expands customers’ travel options to and from the U.S. to Argentina and Uruguay.

A new agreement between Delta and Aerolíneas Argentinas will provide customers from both airlines more travel options to and from the United States and South America. The agreement gives Delta customers access to flights from Buenos Aires’ Ministro Pistarini International Airport to Montevideo, Uruguay, as well as to Mendoza and Cordoba, two important destinations in Argentina.

Likewise, the agreement provides Aerolíneas Argentinas with codesharing on Delta flights to 14 top business destinations in the U.S.

JetBlue Airways (New York) today announced plans to be the first major domestic carrier in the U.S. to accept Apple Pay™ in the sky, making mobile payments at cruising altitude simple and speedy.

Apple Pay gives customers an easy and secure way to pay for onboard purchases of premium offerings. Customers often already have their mobile phone in hand or nearby when the time comes to buy a snack or amenity. Those with an iPhone® 6, iPhone 6 Plus and soon Apple Watch™ can use Apple Pay to purchase premium offerings such as EatUp snack boxes and à la carte food options from the EatUp Café, premium beverages, onboard amenities and Even More Space seating.

An iPad mini for Every Inflight Crewmember

To enable Apple Pay in the air, JetBlue will deploy iPad minis and NFC-enabled cases to more than 3,500 inflight crewmembers. In addition to the cases with Apple Pay compatibility, each iPad mini will be loaded with a custom-designed iOS app — The Inflight Service Assistant — which will give inflight crewmembers access to customer manifest and flight data to provide the best experience possible to JetBlue customers.

The Inflight Service Assistant app offers crewmembers the ability to easily identify TrueBlue and Mosaic loyalty members by name for those special touches like wishing a customer a happy birthday. The iOS app will also offer timely flight information, aircraft configuration and safety information, along with the cases that offer with the payment processing capability for Apple Pay and traditional credit card purchases.

In addition to onboard purchases, JetBlue customers will be able use Apple Pay to complete purchases in JetBlue’s mobile iOS app later this year.

The airline will begin distribution to its more than 23,000 mainline flight attendants during the second quarter of 2015. Upon introduction, the devices will have the ability to handle most onboard retail transactions and will enable access to company email, united.com and the company’s Intranet as well as policies and procedures manuals.

Future enhancements include replacing the flight attendants’ printed safety manual with an electronic version on their iPhones and providing real-time reporting and improved follow-up on aircraft cabin issues and repairs. Additionally, United plans to develop a number of customer-focused tools for the device.

The deployment of iPhone 6 Plus for United flight attendants follows the airline’s deployment of iPads to pilots beginning in 2011, in a move toward creating paperless aircraft and flight decks. United has renewed the iPad pilot program with iPad Air 2. 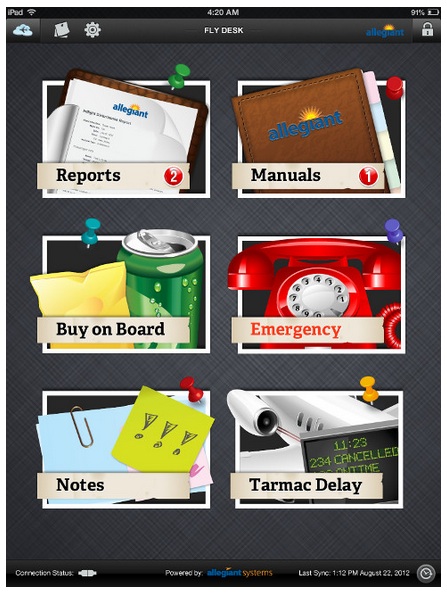 The four-week trial began on December 3 and will help define the operational benefits that mobile technology brings to the airlines’ cabin crew members. Crew members at each airline are using the advanced paperless workspace function of FlyDesk Cabin to improve customer service and productivity, while streamlining operational processes and increasing revenue opportunities.

The trial, which includes airlines in Europe and Central America , includes the advanced use of digital manuals and has demonstrated the multi-lingual capacity of the system. As part of the trial service, Allegiant Systems has also included training, hardware logistics and ongoing support services to the airlines.

In addition to the reporting and paperless functionality of FlyDesk Cabin, Allegiant Air also launched a new, integrated FlyDesk Buy-on-Board application, which allows the cabin crew to use the same iPad to process onboard customer purchases.

The initial hardware deployment and training has been completed successfully and thus far, the response from in-flight crews at all four airlines has been positive. The trial continues until the end of 2012, at which time the full results of the trials will be available.

According to the airline, FlyDesk Cabin is the first of several flyServices offered within the FlyDesk mobile platform by Allegiant Systems, all of which will offer increased efficiency for airlines, with faster deployment, effortless scaling and continuous support.