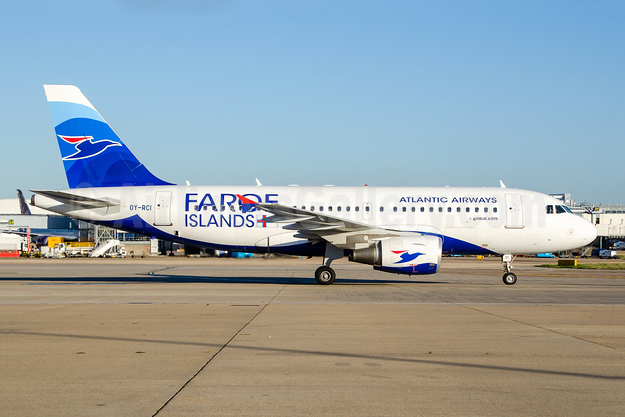 Atlantic Airways, the national carrier of the Faroe Islands, has taken delivery of its first Airbus A320 as part of its plan to increase capacity, becoming Airbus’ newest operator of the type.

Atlantic Airways passengers will benefit from the newest cabin comfort throughout the cabin in a single class layout with 168 seats and 18 inch wide seats as standard. The aircraft which is equipped with CFM engines will be deployed on routes from the Faroe Islands to Copenhagen.

Atlantic Airways (Vagar), the airline of the Faroe Islands, reported a lower profit in the second quarter of the financial year.

Here is the full report by the airline:

“Revenue increased 3% to DKK 122.8 million in Q2 2012 from DKK 118.8 million in the corresponding period in 2011. The increase is mainly attributable to an increase in the helicopter segment.

EBITDA (Earnings Before Interest,Tax, Depreciation and Amortisation) for the second quarter of 2012 increased 8% from DKK 22.9 million to DKK 24.7 million in the corresponding period last year.

In addition to the explanatory factors mentioned above there has also been costs related to the phasing in of the new Airbus A319 and the leased AW 139 helicopter for offshore operations as well as costs related to managing two new aircraft types.

The phase-in of the new fixed-wing aircraft type has been successfully completed.  The operation meets expectations and supports a lower unit cost, but traffic development in Q 2 was lower then expected and resulted in a lower load factor while fuel and dollar cost increased. In general the experience from the first four months is positive, however a full-year cycle will provide a better understanding of the overall impact.

“The introduction of a factory-new Airbus A319 equipped with RNP AR navigational aid system has changed the aviation environment in the Faroe Islands. It supports our goal to improve regularity and lower unit cost in order to provide The Faroese people with the best service possible. We have not seen the full impact yet but improved regularity, enhanced safety, greater comfort, new destinations, reduced CO2 emissions and lower unit costs are some of the benefits we will optimise in the future,”says Magni Arge, CEO. “In the second quarter the helicopter operation has shown a solid potential through its additional involvment in offshore operations and we look forward to support the Statoil consortium during its exploration campaign in Faroese waters.”

Outlook for charter and ACMI are still lower but in Q3 agreements regarding capacity provisions for tour operators out of Denmark as well as air logistic support to offshore activity are in place while outlook for Q4 is more speculative.

Fuel prices and external economic factors are unpredictable and can still have a significant impact. Severe disruptions and irregularity from adverse weather in July is expected to cause higher cancellations and diverions costs in Q3 compared to the corresponding period last year. We remain cautious in our guidance as to financial performance in 2012 and expect a result closer to the 2010 levels rather than 2011.”

Copyright Photo: Nik French. BAe RJ100 OY-RCC at Manchester displays the updated 2012 livery that was introduced with the introduction of the first Airbus A319.