BVI Airways will use the pictured BAe (Avro) RJ100 aircraft (VP-LWW, msn E3274, above) to serve the new route, which connects Miami to the British Virgin Islands’ capital and largest island. Tortola will also be MIA’s 40th Caribbean destination with nonstop service.

Previously British Caribbean Airways (below) was a short-lived British airline that attempted to connect Tortola in the British Virgin Islands with Miami via Providenciales in the Turks and Caicos Islands. The 146 operator flew between April 14, 1986 and October 12, 1987. 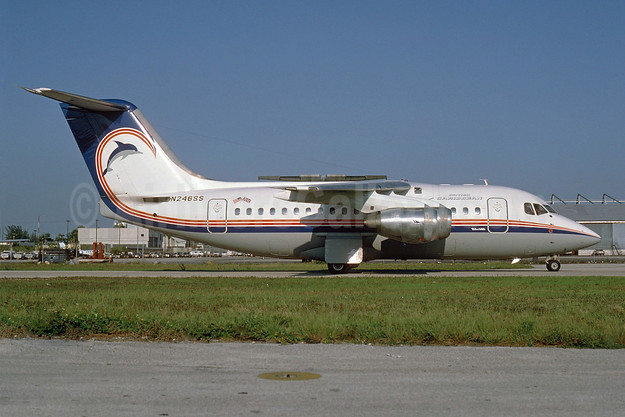 Swiss European Air Lines (subsidiary of Swiss International Air Lines) (Zurich) has parked four BAe (Avro) RJ100s due to their high operating costs, maintenance issues and recent incidents according to Aero Telegraph. According to the report, four Embraer 190s will replace the grounded aircraft starting in either December 2014 or January 2015. The aircraft will be leased from Helvetic Airways (Zurich).

The ACMI cooperation between Swiss International Air Lines and Helvetic Airways has been in existence since 2006. Helvetic has been operating a total of 4 Fokker 100s until spring 2017.

Brussels Airlines (Brussels) on October 26 will start flights between Brussels Airport and Riga. The capital of Latvia will be connected to the European capital with six flights per week to Riga International Airport, all in the afternoon.

The flights will be operated in collaboration with codeshare partner airBaltic.

The new route will be operated with Avro (BAe) RJ100 aircraft.

SWISS has concluded a new collective labor agreement with the IPG, the staff association of its Swiss European Air Lines pilots. The new CLA14+ will keep the company competitive, give greater flexibility to its flight operations and enable its new Bombardier CS100 and Boeing 777-300 ER aircraft fleets to be brought into service with the participation of both its present pilot corps.

The new accord was formally signed by SWISS and the IPG on Wednesday May 28. The CLA14+ collective labor agreement, which will be valid from July 2014 to April 2019, will enable SWISS to make major structural change. The new accord, which will be available to all SWISS pilots, will cover and regulate the introduction of the company’s two new aircraft types, the Bombardier CS100 and the Boeing 777-300 ER, in a way which safeguards its competitive credentials while also ensuring fair participation for both of its cockpit corps. The new agreement offers the company’s present Avro RJ100 pilots new long-haul career opportunities, and simultaneously allows the company’s Airbus pilots to transfer to it with due regard to their current rank and qualifications.

The key features of the new CLA14+ in brief:

•An innovative new salary and workhours model will provide greater flexibility for SWISS’s flight operations, while also offering its pilots more scope in their roster planning. At the same time, the modernized salary system, while being more closely geared to functional criteria, still pays due and full regard to further considerations such as experience and loyalty to the company.

•Any transfers to the new CLA14+ from the Airbus pilot corps will be effected with full recognition of seniority and experience. Up to two-thirds of the long-haul places under the new CLA have been forseen for such transfers.

•This will both ensure that free positions can be occupied according to needs and allow SWISS to establish its planned new cockpit crew base in Geneva. The further option of recruiting pilots for such positions from outside SWISS would only be resorted to if there were no candidates for the positions concerned from either SWISS pilot corps.

“Our new CLA14+ will lay the foundations for making our operations more flexible and more cost-effective and thus more competitive, without having to outsource or reduce corps numbers,” says SWISS Chief Operating Officer Rainer Hiltebrand. “And it will ensure that we can employ all our pilots under favourable terms and conditions which we can continue to offer in the longer term.”

The new CLA14+ will now be subject to a phase of consultation among the Swiss European pilot corps, after which it will be put to referendum in a process that will begin in mid-June.

SWISS’s Airbus pilots will remain subject to their own CLA until the end of 2016 as desired. SWISS remains in discussions with Aeropers, the staff association of its Airbus cockpit corps.

Atlantic Airways (Vagar), the airline of the Faroe Islands, reported a lower profit in the second quarter of the financial year.

Here is the full report by the airline:

“Revenue increased 3% to DKK 122.8 million in Q2 2012 from DKK 118.8 million in the corresponding period in 2011. The increase is mainly attributable to an increase in the helicopter segment.

EBITDA (Earnings Before Interest,Tax, Depreciation and Amortisation) for the second quarter of 2012 increased 8% from DKK 22.9 million to DKK 24.7 million in the corresponding period last year.

In addition to the explanatory factors mentioned above there has also been costs related to the phasing in of the new Airbus A319 and the leased AW 139 helicopter for offshore operations as well as costs related to managing two new aircraft types.

The phase-in of the new fixed-wing aircraft type has been successfully completed.  The operation meets expectations and supports a lower unit cost, but traffic development in Q 2 was lower then expected and resulted in a lower load factor while fuel and dollar cost increased. In general the experience from the first four months is positive, however a full-year cycle will provide a better understanding of the overall impact.

“The introduction of a factory-new Airbus A319 equipped with RNP AR navigational aid system has changed the aviation environment in the Faroe Islands. It supports our goal to improve regularity and lower unit cost in order to provide The Faroese people with the best service possible. We have not seen the full impact yet but improved regularity, enhanced safety, greater comfort, new destinations, reduced CO2 emissions and lower unit costs are some of the benefits we will optimise in the future,”says Magni Arge, CEO. “In the second quarter the helicopter operation has shown a solid potential through its additional involvment in offshore operations and we look forward to support the Statoil consortium during its exploration campaign in Faroese waters.”

Outlook for charter and ACMI are still lower but in Q3 agreements regarding capacity provisions for tour operators out of Denmark as well as air logistic support to offshore activity are in place while outlook for Q4 is more speculative.

Fuel prices and external economic factors are unpredictable and can still have a significant impact. Severe disruptions and irregularity from adverse weather in July is expected to cause higher cancellations and diverions costs in Q3 compared to the corresponding period last year. We remain cautious in our guidance as to financial performance in 2012 and expect a result closer to the 2010 levels rather than 2011.”

Copyright Photo: Nik French. BAe RJ100 OY-RCC at Manchester displays the updated 2012 livery that was introduced with the introduction of the first Airbus A319.

Lufthansa Group (Frankfurt) has signed a contract with Bombardier for 30 110-seat CS100 jets (formerly known as the C110) which is part of the CSeries of new airplanes. The group also secured options for 30 additional aircraft. The new type will be operated by Swiss International Air Lines (Zurich) and will replace the 20 current BAe RJ100s and allow for further growth. The new type is expected to enter service in 2013.