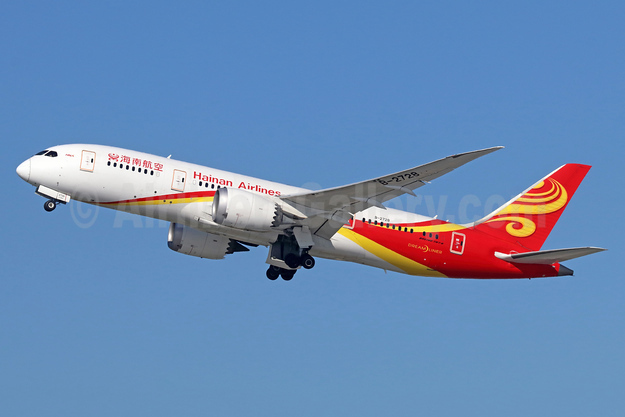 The once weekly Guiyang–Paris route will be flown by a Boeing 787 Dreamliner and takes off every Sunday.

The Xi’an–Los Angeles service is scheduled to take off from Xi’an at 9:10 pm every Monday and Thursday BJT, and land at Los Angeles at 18:10 pm PT after being in the air for 12 hours and 10 minutes.

The new route will be serviced by a Boeing 787-8 Dreamliner aircraft.

Hainan Airlines already has several routes that originate in Xi’an, with services to Tokyo, Rome, Sydney and Melbourne. 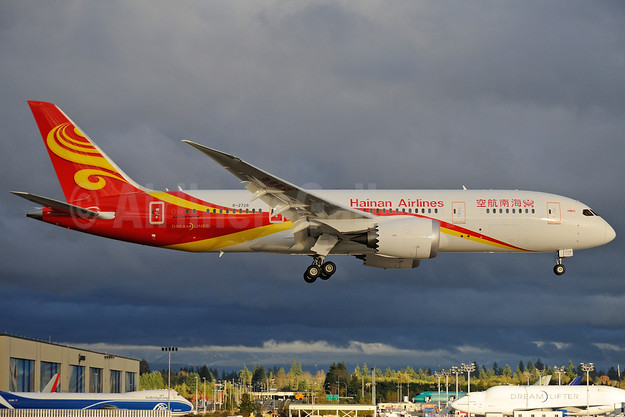 Hainan Airlines will add the twice-weekly Shenzhen – Brussels route on March 20, 2018. The new route will be operated with Boeing 787 Dreamliners and will be the third Chinese route serving Brussels.

Services to Chongqing commenced on October 21 and to Chengdu on October 27 from JFK’s Terminal 4. Each route will operate twice weekly on Hainan Airline’s fleet of Boeing 787 Dreamliner aircraft. With a capacity for over 60,000 passengers per year, it is the only nonstop service offered between New York City and China’s rapidly growing Sichuan province. Chongqing to New York will be Hainan Airlines’ longest flight route—nearly 7573 miles.

These new services represent the 13th and 14th nonstop trans-Pacific routes, following the West Coast launch earlier in the year.

Chengdu, the capital of Sichuan province, is widely recognized for its Giant Panda Breeding Center. But this traditional home of Sichuanese cooking city is fast-becoming the latest stop on the global food trail, as Chengdu is Asia’s first UNESCO City of Gastronomy. Chengdu also strikes the perfect balance of traditional Chinese customs and modern cultural elements, from the many traditional tea houses to the 150 museums it boasts.

Chongqing is a major commercial center of 30 million people, renowned for its distinctive spicy cuisine, and its busy port along the Yangtze River. Chongqing is the home of the UNESCO World Heritage site of The Dazu Rock Carvings and Chinese religious sculptures and carvings that date back to the 7th Century. As the provisional capital of China from 1937 – 1945, Chongqing also has a rich wartime history.

Through its partner, JetBlue, Hainan Airlines will offer connections to its network of over 70 destinations to passengers arriving from JFK.

Hainan Airlines (Haikou and Beijing) today launched the first of three new nonstop routes between the U.S. and Mainland China, part of the airline’s large-scale expansion of its service in North America. Hainan is inaugurating service between San Jose, California (Silicon Valley) (SJC) and Beijing on June 15, between Boston’s Logan International Airport and Shanghai (Pudong) on June 20, and Seattle-Tacoma International Airport and Shanghai-Pudong on June 22.

The Silicon Valley and Boston routes will be flown by Boeing 787 Dreamliners, making Hainan the airline with the most nonstop 787 Dreamliner routes between China and North America. Hainan currently offers daily nonstop service between Beijing and Seattle/Tacoma, Boston and Chicago (O’Hare). Hainan first launched U.S. service in 2008 with nonstop flights between Seattle/Tacoma and Beijing.

Hainan Airlines (Haikou and Beijing) today announced it plans to begin three new nonstop routes between the United States and China. Service will be inaugurated from Silicon Valley’s Norman Y. Mineta San Jose International Airport to Beijing on June 15, from Boston’s Logan Airport to Shanghai’s Pudong Airport on June 20, and as previously reported, from Seattle-Tacoma International Airport to Shanghai Pudong on June 22.

The new flights from San Jose represent the first ever nonstop service between Mainland China and Silicon Valley. Flights will depart San Jose International Airport at 1:10 pm (1310) and arrive Beijing at 4:40 pm (1640) the following day. Return flights will depart Beijing at 2:30 pm (1430) and arrive San Jose at 11:10 am (1110) the same day. Flight time is 12 ½ hours westbound and 11 hours 40 minutes eastbound.

Cargo service is offered on all flights.

Service on the existing Beijing routes to and from Boston, Seattle/Tacoma and Chicago (O’Hare) will increase to daily on May 1, 2015. Hainan Airlines also operates daily between Toronto, Canada and Beijing.

Hainan Airlines (Haikou and Beijing) started operating its new Boeing 787-8 on its nonstop service between SeaTac International Airport and Beijing effective yesterday (Friday, January 10, 2014).  The carrier has been operating the route since it inaugurated service on June 9, 2008 with Airbus A330 aircraft.  Scheduled departure and arrival times at Seattle/Tacoma will not change, and Hainan will be the only foreign airline operating between the United States and China nonstop with Dreamliners.

Hainan’s high quality service has become well known to travelers who fly between Seattle and China. Hainan Airlines has built a reputation for quality. Its business class service features flat-bed seats with turndown service, gourmet dining and fine wines on bone china, and complimentary limo service in Beijing for both arrival and departure Even its economy class service is well regarded, as the airline received the award for the Best Economy Class Service in the world by World Travel Awards in Doha, Qatar just a few weeks ago. The Dreamliner will add more features to what Hainan refers to as a “Cherished Experience”.

“Hainan Airlines has strong ties to Seattle, operating 110 Boeing aircraft out of a fleet of 128”, said Joel Chusid, Seattle-based Executive Director, US. “We have been looking forward to this for a long time.” The airline has ordered ten Dreamliners, and six are already in service. In addition to Seattle, the aircraft is used domestically and was recently introduced on its trans-Pacific route to Chicago.  Plans are to have all its North American routes flown with Dreamliners, including Toronto (Pearson) and its newest announced destination, Boston, which will begin in June 2014.

Hainan Airlines (Haikou and Beijing) and Boeing (Chicago) today (July 4) celebrated the delivery of the airline’s first 787 Dreamliner at Charleston, SC.  Boeing 787-8 B-2722 (msn 34939) was handed over to the carrier. The following day the aircraft flew to Boeing Field in Seattle as a crew rest stop and training before proceeding to China. The delivery is the first of 10 787s for Hainan Airlines.

Hainan Airlines will first operate the Dreamliner on a domestic route from Beijing to Haikou starting on July 31. Thereafter, the airline will deploy the 787 on its North America routes, increasing the frequency of its Beijing-Seattle/Tacoma, Beijing-Toronto (Pearson) and Beijing-Chicago (O’Hare) services, with several new destinations.

As one of only seven airlines rated as five-star by Skytrax, Hainan Airlines is the fourth largest airline in terms of fleet size in the People’s Republic of China.  Its current fleet includes 106 Boeing airplanes. The airline serves scheduled domestic and international services on 500 routes fromBeijing, Haikou and other operating base on the mainland, and provides charter services.