One of the first Concorde jetliners built at Toulouse, France has made its final “voyage” with the aircraft’s ground transfer to the Airbus-supported Aeroscopia Museum site at the Toulouse-Blagnac Airport.  Designated as an Aerospatiale BAC Concorde 100 and registered as F-WTSB (msn 1), this Concorde made its last flight in April 1985, returning to Toulouse after a career that included a full range of test and development activity.

The Aeroscopia Museum where Concorde msn 1 will be permanently displayed has received funding from Airbus, and its collection will also include one of the initial A300s – the cornerstone widebody jetliner in Airbus’ product line – as well as the msn 1 flight test A400M military airlifter. 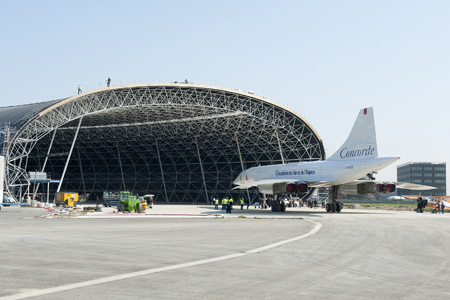 Continental Airlines (Houston) was cleared yesterday (November 29) of any criminal responsibility in a French court for the Concorde crash in Paris in 2000 that killed 113 people. The ruling absolves a Continental mechanic of involuntary manslaughter according to this report by Reuters. The mechanic had fashioned a non-standard titanium strip that fell off a Continental McDonnell Douglas DC-10 aircraft that fell onto the runway just before the Air France (Paris) Concorde attempted its ill-fated takeoff. Air France flight AF 4590 was scheduled to fly from Charles de Gaulle International Airport near Paris, to John F. Kennedy International Airport in New York City on July 25, 2000. Aerospatiale-BAC Concorde 101 F-BTSC (msn 203) crashed into a hotel in Gonesse, France. All 100 passengers and the nine crew members on board died in the fiery crash.

Top Copyright Photo: Christian Volpati. Concorde 100 F-BTSC (msn 203) is pictured at Paris (CDG) in March 1976 in the original 1959 delivery color scheme. The airliner was originally leased by Air France from Aerospatiale on January 1, 1976 as the earlier model of the type. It was converted to a Concorde 101 in June 1980.