Little by little the Virgin Atlantic Boeing 747-400 registered as G-VLIP is losing its promotional decals “Millenium Falcon” as it has been sold to Atlas Air for cargo purposes and will be ferried in a few weeks to US. 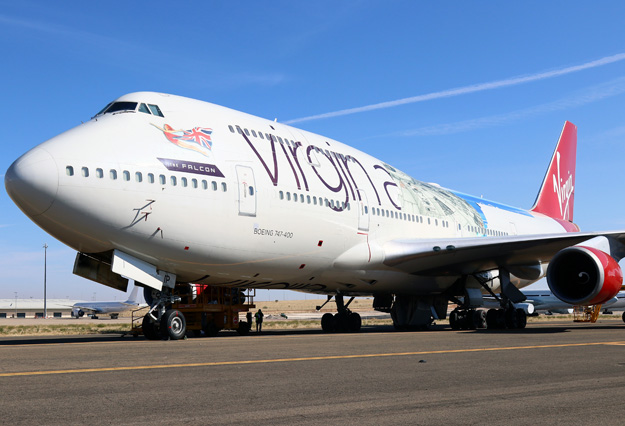 Virgin Atlantic Airways has made this announcement on Boeing 747-443 G-VLIP:

We’re excited to unveil a brand new, one-of-a-kind Star Wars: Galaxy’s Edge plane wrap on this Boeing 747 aircraft, which has taken to the skies on September 25. The themed plane will now transport holidaymakers from London Gatwick Airport to Orlando, Florida, where they will be able to experience Star Wars: Galaxy’s Edge, at Walt Disney World® Resort.

The plane, which will be known as “The Falcon” – showcasing the iconic Millennium Falcon – the iconic spaceship once owned by Han Solo – is one part of Virgin Atlantic and Virgin Holidays’ celebrations of Star Wars: Galaxy’s Edge, which opened in Orlando in August.

The themed 747 will now transport you from London Gatwick Airport to Orlando, Florida, where you’ll be able to experience Star Wars: Galaxy’s Edge, at Walt Disney World® Resort.

The aircraft, which will be known as “The Falcon” – showcases the iconic Millennium Falcon – the famous spaceship once owned by Han Solo. It forms part of Virgin Atlantic and Virgin Holidays’ celebrations of Star Wars: Galaxy’s Edge, which opened in Orlando in August.

Falcon emerges from its hangar at Gatwick

As well as “The Falcon” official plane unveiling, Virgin Holidays has also launched The Ultimate Virgin Holidays Star Wars Experience – a curated themed holiday experience to Walt Disney World® Resort in Florida, which will take off between 15 and 22 February 2020 – giving fans the chance to live their Star Wars adventure, bigger and bolder than ever before.

To celebrate the aircraft entering our flight operations today, Virgin Holidays has also launched a social media competition, encouraging members of the public who spot the plane to capture and share images, for the chance to win two seats onboard The Ultimate Virgin Holidays Star Wars Experience.

The competition is simple – anyone who spots the Star Wars: Galaxy’s Edge aircraft can snap and share an image on their personal Instagram account, tagging both Virgin Holidays and Virgin Atlantic, and including #TheFalcon in the photo caption. All entries received by Wednesday 9 October will be entered into a prize draw.

The highly-anticipated land, which is located at Disney’s Hollywood Studios® Theme Park, is set on Black Spire Outpost on the planet Batuu, located at the outer rim of the galaxy. Once there, Virgin Atlantic and Virgin Holidays’ guests will be able to experience all-new Star Wars attractions and enjoy immersive entertainment, rubbing shoulders with smugglers, rogue traders and adventurers – all the while avoiding the ever-expanding reach of the First Order.

“Over the last three decades, we have taken millions of British holiday-makers to enjoy the magic of Disney and we know that so many of our customers have been excited about planning their trip to experience this new land. We hope those lucky enough to board ‘The Falcon’ will enjoy their journey with us, even more.”

“It was a very exciting brief to be able to redesign our aircraft livery to represent something as iconic as the Millenium Falcon and it’s not something that you get to do everyday,” said our senior engineer, Dave Napper. “We have many Star Wars fans within the company who jumped at the chance to get involved in some way, and we cannot wait to see ‘The Falcon’ take flight.”

Watch the Falcon receive its new artwork in this timelapse video.

By participating in the Star Wars Galaxy’s Edge “The Falcon” Competition (the “Competition”), it is deemed that you accept and agree to be bound by these terms and conditions:

To enter this Competition, you must: 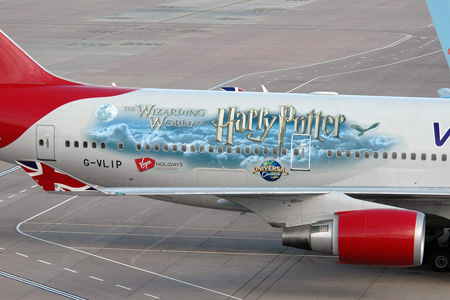 Virgin Atlantic Airways (London) announced the launch of their first-ever global marketing campaign, “Your Airline’s Either Got it or it Hasn’t.”

The new campaign, launching first in the U.S., stems from the roots Virgin Atlantic was built on – a passion for flying and challenging the norm to give travelers a unique and unforgettable flight experience.  Reaffirming Virgin Atlantic’s belief that flying should be a pleasure, not a chore, the campaign line, “Your Airline’s Either Got it or it Hasn’t” encourages passengers to compare their flying experiences and asks “does your airline have ‘it’?”  ‘It’ represents what makes flying Virgin Atlantic great, from complimentary car service on all four legs of the journey to moving from curb to Clubhouse in under 10 minutes atHeathrow’s Upper Class Wing, to a fully flat bed with your own aisle access.  These are just some of the ways that separate Virgin Atlantic from the rest, and as one ad proclaims, Virgin Atlantic is “Je ne sais quoi. Defined.”

“Your Airline’s Either Got it or it Hasn’t” represents a new direction for the airline’s advertising program, by moving to a single global campaign and creating a seamless look across all its global gateways. The rich style of photography features the product benefits of Virgin Atlantic’s Upper Class Suite, Heathrow Clubhouse, complimentary car service and other elements that separate Virgin Atlantic from its competitors.

The U.S. will be the first global market to fully launch the campaign, which was developed by the Virgin Atlantic global team and agency of record, RKCR/Y&R in the UK and Y&R offices globally. The campaign will then continue to move across the globe to all 32 destinations the airline flies.  “Your Airline’s Either Got it or it Hasn’t” will be first seen in the U.S. in consumer and lifestyle print publications, online banners, rich media, email, promotions, and events sponsorship.

To experience the Virgin Atlantic difference, the carrier has launched a new microsite at www.Virginatlantic.com/experience.

Virgin Atlantic Airways (London) has introduced its new Harry Potter logojet to help promote the opening of Universal Studios’ “The Wizarding World of Harry Potter” next month in Orlando.