Alaska Airlines is inviting school age children from across the state of Alaska to help paint a new plane, as part of its “Paint the Plane” sweepstakes. The Boeing 737-700 cargo jet will feature a special paint theme created by selected art from young Alaskans.

This is the second time Alaska Airlines has called on students in Alaska to help design a plane livery. The first was the “Spirit of Alaska Statehood,” designed by Hannah Hamburg (below), then a 16-year-old Sitka high-school student. The plane with her drawing was introduced in 2009 to celebrate 50 years of statehood and was retired in June 2016. 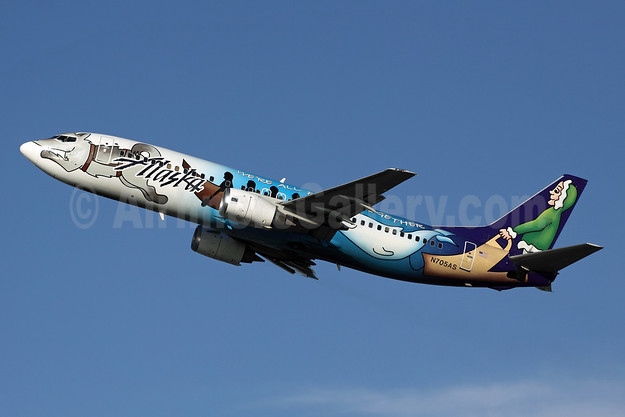 “With the recent retirement of our last Alaska-themed livery we can’t think of a better way to honor our connection to Alaska,” said Marilyn Romano, Alaska Airlines’ regional vice president for the state of Alaska. “Our goal is not just painting a plane, but to inspire Alaska students to show us, through art, why Alaska is such a special place to call home.”

Students who submit artwork by the deadline will have a chance to win one of 10 prize packages consisting of either four roundtrip tickets anywhere Alaska Airlines flies, or a $1,000 scholarship to the University of Alaska.

Complete sweepstakes rules and entry forms are available at http://www.painttheplane.com. Entry forms will also be available at Alaska Airlines ticket counters in select terminals throughout the state of Alaska.

Oct. 12 – Sweepstakes begins for Alaska students
Oct. 28 – Entry forms must be postmarked and mailed
Dec. 2016 – Design is revealed and winners announced
Spring 2017 – Painted plane is unveiled
Alaska Airlines has painted other special liveries with help from the public, including the “Timbers Jet,” supporting the Portland Timbers Major League Soccer team and the “Spirit of the Islands,” designed in 2013 by a Honolulu high school student.

Alaska Airlines (Seattle/Tacoma) will again serve as the official airline sponsor of the Iditarod Trail Sled Dog Race, marking the 36th year the carrier has supported the event.

As the official airline of the Iditarod, Alaska continues its tradition of presenting the Leonhard Seppala Humanitarian Award, which recognizes one musher for providing exemplary dog care and is considered the highest honor a competitor can receive. Voted on by trail veterinarians, the Leonhard Seppala award is named after one of Alaska’s most-celebrated mushers, whose 1925 sled-dog team traveled the longest distance to transport diphtheria serum to Nome.

As part of its sponsorship, Alaska Airlines also will help provide air transportation and dog-care supplies for 45 Iditarod veterinarians who come to Alaska from across the United States to care for the race dogs’ health and safety.

In addition, many Alaska Airlines employees contribute their time at the event. Among them are several pilots who lead the Iditarod Air Force, flying veterinarians, supplies and volunteers to remote checkpoints along the trail.

“Our record performance in what is seasonally our weakest quarter is due to steady demand that kept pace with our growth, and to the many changes we’ve made to improve our business over the last several years,” Alaska Air Group CEO Brad Tilden said. “Looking ahead, we’re facing increased competition in certain markets, and we will closely monitor the environment and continue to adjust our plans to appropriately address these challenges. Our first quarter results, and our ability to be flexible and adapt to an ever-changing industry landscape, would not be possible without the dedication and determination of our employees at Alaska and Horizon.”

The following table reconciles the company’s reported GAAP net income and earnings per diluted share (EPS) during the first quarters of 2013 and 2012 to adjusted amounts:

Alaska Airlines (Seattle/Tacoma) is inviting school-aged children in Hawai’i to create artwork honoring the unique culture of the Aloha State that will adorn a Boeing 737-800 in a “Paint the Plane” contest. In partnership with the Hawai’i State Department of Education (DOE) and the Hawai’i Association of Independent Schools (HAIS), contest forms will be distributed to more than 400 schools and 218,000 students throughout the Islands.

Students in kindergarten through 12th grade from public, private and home schools across the state have until November 30 to submit designs that best capture the “Spirit of the Islands.” A final selection panel comprised of 10 judges representing Hawai’i’s government, community, arts, education and tourism leaders will select three top designs. Residents of the state of Hawai’i will then vote on the top three designs and provide Alaska Airlines with their recommendation in an online public vote slated for December 2012. The plane is scheduled to be revealed at a public event in Hawai’i during the spring of 2013.

Hawai’i Gov. Neil Abercrombie attended a kick-off event today with 330 students at Prince Jonah Kuhio Elementary School in Honolulu, along with representatives from Alaska Airlines, the DOE and HAIS (above).

“Spirit of the Islands” contest schedule:

Complete contest details are available at www.alaskaair.com/hawaii, including contest rules, instructions and entry forms required to participate. Entry forms will also be available at the Alaska Airlines booth during several community events throughout the Islands, including the Maui Fair, Hawai’i’s Children and Youth Day, Hawai’i Fishing and Seafood Festival, and the Kona Coffee Cultural Festival.

The “Spirit of the Islands” contest is the third time Alaska Airlines has turned to the public to paint a plane. The Spirit of Alaska Statehood aircraft paint scheme (above) was created by a 16-year-old Sitka student in a similar statewide contest celebrating Alaska’s 50-year anniversary. Last year, two soccer fans designed the MLS Portland “Timbers Jet” (below) to celebrate the airline’s jersey sponsorship of the Portland, Oregon, soccer team.

Alaska Airlines is hosting the contest in celebration of five years of serving Hawai’i, which today includes daily nonstop flights from seven West Coast cities and Anchorage, Alaska, to four major islands. On average, Alaska Airlines offers more departures in more nonstop markets between Hawai’i and the West Coast than any other carrier (22 daily roundtrips, or 308 weekly flights, in 21 nonstop markets).

Copyright Photo: Michael B. Ing. An outstanding picture of Alaska Airlines “We’re all pulling together” Boeing 737-490 N705AS (msn 29318) at Anchorage.

Alaska Airlines (Seattle/Tacoma) will serve as the official airline sponsor of the Iditarod Trail Sled Dog Race, marking the 32nd year the airline has supported the race.

As part of its sponsorship, Alaska Airlines also will provide air transportation and dog-care supplies for a team of 48 Iditarod veterinarians who care for the race dogs’ health and safety.

Copyright Photo: Mark Durbin. Boeing 737-490 N705AS (msn 29318) with the special and unique “We’re all pulling together” livery which celebrates the 50th Anniversary of statehood for the state of Alaska passes through San Francisco.

Alaska Airlines (Seattle/Tacoma) is expected to roll out its latest Boeing 737-400 “We’re All Pulling Together” logojet today (April 9) at SEA. The airplane is dedicated to the State of Alaska and its 50th Anniversary of Statehood. The aircraft is due to ferry to Sitka, AS to be officially unveiled in a ceremony. Sitka is the home of the “Paint the Plane” contest design winner, Hannah Hamberg.

You can see the design at: http://www.painttheplane.com/

In other news, AS will start Bellingham-Las Vegas service (three times weekly) with Boeing 737-700s starting on June 25.