As Jet Airways recently announced their commitment to adding 150 MAX8 aircraft to their existing fleet, Vinay Dube, Chief Executive Officer, Jet Airways, shared “Partnering with GECAS has enabled us to introduce these modern, fuel efficient aircraft into our fleet. We at Jet Airways are delighted to be able to offer a superior customer experience to our guests with the introduction of these MAX aircraft from GECAS.” 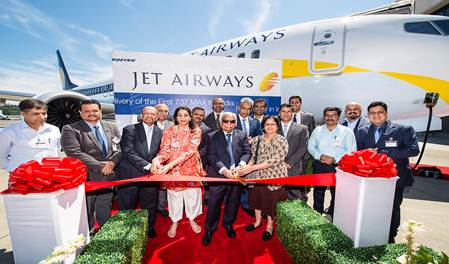 In addition, Boeing issued this statement:

Boeing and Jet Airways on June 19, 2018 celebrated the delivery of the airline’s first 737 MAX airplane. Jet Airways will be first Indian carrier to fly the new and improved 737 airplane, which delivers a double-digit improvement in fuel efficiency and improved passenger comfort.

This delivery marks the first of 150 737 MAX airplanes the Mumbai-based airline has on order with Boeing, following two separate orders for 75 jets placed in 2015 and earlier this year.

Jet Airways is India’s second-largest airline with a fleet of nearly 120 airplanes serving more than 60 destinations across 15 countries across Asia, Europe, North America and elsewhere.

The 737 MAX is the fastest-selling airplane in Boeing history, accumulating more than 4,500 orders from 99 customers worldwide.

The family of airplanes is powered by CFM International LEAP-1B engines, and includes design updates such as Boeing’s Advanced Technology winglet that will result in less drag and optimize performance, especially on longer-range missions. Together, these improvements reduce fuel use and CO2 emissions by at least 14 percent compared to today’s Next-Generation 737s – and by 20 percent more than the single-aisle airplanes they replace.