Norwegian Air Shuttle (Norwegian Air Norway) (Norwegian.com) (Oslo) continues to face a strike by its pilots after overnight mediated talks on a new collective agreement failed. The strike today enters the eighth day. The strike by its pilots, represented by the NPU and labor group Parat, will continue indefinitely. As a result Norwegian is canceling today all flights in Norway and Sweden and most flights between the Scandinavian capitals.

“Norwegian has submitted several proposals that provide all the Scandinavian pilots job security, employment guarantee for three years, to keep their good wage conditions and not the least, their ties with the parent company. Therefore it is extremely sad that it was not possible to reach an agreement with Norwegian Pilot Union (NPU) and Parat with the national mediator. The strike continues, unfortunately indefinitely.

Norwegian deeply regrets that the strike will continue and that travelers, employees and others are affected. After many hours of negotiations on Friday night to Saturday, both sides failed to reach a solution. Norwegian wants an end to the strike and has gone a long way economically to end the strike and bring peace to the Group. The company has submitted written guarantees to the NPU on key points that job security, job security, and to become attached to the group.”

Skymark Airlines (Tokyo-Haneda) has been retrenching. Besides the cancellation of its Airbus A380 order by Airbus, the low-fare carrier has also announced it will leave Tokyo Narita and concentrate its flights at Tokyo (Haneda). Now according to ZipanguFlyer, there may be a new development:

“On August 19, the Nikkei Shimbun reported that the AirAsia Group has started considering an investment in ailing Skymark Airlines (BC/SKY), including a possible takeover. It said that the Malaysian LCC, a very important customer for Airbus, is also talking with the European manufacturer to reduce the penalties they are seeking with Skymark for the canceled Airbus A380 order.”

AirAsia is currently working with new Japanese partners to launch the second version of AirAsia (Japan) next year. If this report is correct and it is consummated, it would probably be the end of Skymark Airlines and Boeing would lose a loyal Japanese customer.

“Sunwing Airlines is pleased to announce it has taken delivery of its newest aircraft directly from the Boeing facility in Seattle. Earlier this month, Sunwing representatives travelled to the Seattle headquarters of Boeing to pick up their latest aircraft — the state-of-the-art 737-800 Boeing plane which is configured within Sunwing fleet specification to accommodate 189 passengers. Sunwing Captain, John Hudson and crew operated the brand new aircraft carrying the Sunwing representatives from Seattle to Toronto.

The Next-Generation aircraft contains most modern interior features such as an innovative cabin mood lighting system, pivoting overhead stowage bins that add to the openness of the cabin, as well as advanced-technology wing design that helps increase fuel capacity and efficiency. After leaving Boeing, the 737-800 series plane was retrofitted with the Split Scimitar Winglets technology prior to its integration into Sunwing Airlines flight operations. This technology improves performance of the aircraft and decreases fuel burn by approximately seven per cent over the same aircraft with no Winglets.” 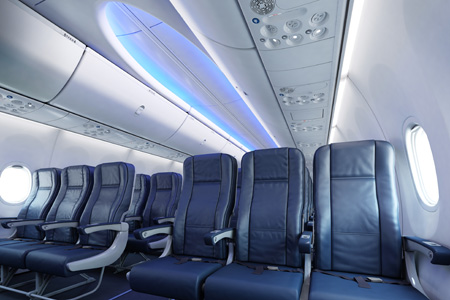