Bmibaby (bmibaby.com) (East Midlands) is going out of business. The last flights will be operated on September 9. To avoid a drop off of passengers at the end, the carrier is advising its customers to fly out on the airline and has given them guidance on who to fly home after September 9.

“Tiny” will soon be enjoying retirement. For now he is encouraging customers to continue flying on the airline. 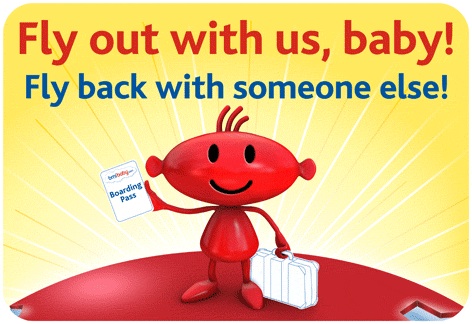 Lufthansa (Frankfurt) is on the verge of announcing a sale of subsidiary Bmibaby (bmibaby.com) (East Midlands) to an unnamed UK-based company. The sale should be concluded this quarter. The new owners are expected to retain the current brand for the short-term but a new name is probably coming. The sale will include the Boeing 737 fleet.

Copyright Photo: Ton Jochems. Please click on the photo for additional details on this special aircraft.

Below: The now iconic “Tiny” logo may be retired to Malaga if the new owners opt for a new look.

bmibaby (bmibaby.com) (East Midlands) on April 13 announced it will base two additional aircraft at Belfast City Airport and offer seven new routes from the airport. New flights will go on sale to Malaga, Alicante, Palma, Faro and Ibiza for summer 2012, plus a new year round service to Amsterdam and new flights to Geneva for winter 2011. bmibaby will be the only low cost airline to operate these routes directly from Belfast City Airport.

As a result of these changes, bmibaby will cease operations from Cardiff Airport and from Manchester Airport at the end of the summer 2011 season.

Bmibaby (bmibaby.com) (East Midlands) has modified its color scheme with the first aircraft being this Boeing 737-59D G-BVKB (msn 27268). The former “Children in Need” special color scheme (with balloons) has now been repainted. A new red “Tiny” emblem now adorns a light blue tail. G-BVKB has also been renamed “Jelly Bean”. The use of “Tiny” now matches the use of the figurine on its website.