Lion Air Flight 610 was a scheduled domestic flight operated by the Indonesian airline Lion Air from Soekarno–Hatta International Airport in Jakarta to Depati Amir Airport in Pangkal Pinang. On 29 October 2018, the Boeing 737 MAX 8 (PK-LQP) operating the route crashed into the Java Sea 12 minutes after takeoff. All 189 passengers and crew were killed in the accident. It became the second deadliest airplane accident in Indonesia, only behind Garuda Indonesia Flight 152.

This was the first major accident involving the 737 MAX and the deadliest involving a 737 aircraft surpassing Air India Express Flight 812 in 2010. It is also the worst accident for Lion Air in its 18-year history, surpassing the previous crash in Surakarta that killed 25.

A preliminary investigation revealed problems noticed by passengers and crew on the aircraft’s previous flight, as well as signs of instrument failure on previous flights. As a result, Boeing issued a warning to all operators of the 737 MAX series to avoid causing an abrupt dive similar to the Lion Air flight.

The Republic of Indonesia issued this preliminary report on flight JT 610 on October 29, 2018:

On 28 October 2018, a Boeing 737-8 (MAX) aircraft registered PK-LQP was being operated by PT. Lion Mentari Airlines (Lion Air) as a scheduled passenger flight from I Gusti Ngurah Rai International Airport (WADD), Denpasar to Jakarta as LNI043. During pre-flight check, the PIC discussed with the engineer of the maintenance actions that had been performed including replacement of the AoA sensor and had been tested accordingly.

The aircraft departed at 1420 UTC (2220 LT) at night time, the DFDR showed the stick shaker activated during the rotation and remained active throughout the flight. About 400 feet, the PIC noticed on the PFD the IAS DISAGREE warning appeared. The PIC handed over control to the SIC and cross checked the PFDs with the standby instrument and determined that the left PFD had the problem. The PIC noticed the aircraft was automatically trimming AND. The PIC moved the STAB TRIM switches to CUT OUT and the SIC continued the flight with manual trim without auto-pilot until the end of the flight.

The PIC declared “PAN PAN” to the Denpasar Approach controller due to instrument failure and requested to maintain runway heading. The PIC performed three Non-Normal Checklists and none contained the instruction “Plan to land at the nearest suitable airport”.

The remainder of the flight was uneventful and the aircraft landed Jakarta about 1556 UTC. After parking, the PIC informed the engineer about the aircraft problem and entered IAS and ALT Disagree and FEEL DIFF PRESS problem on the AFML.

The engineer performed flushing the left Pitot Air Data Module (ADM) and static ADM to rectify the IAS and ALT disagree followed by operation test on ground and found satisfied. The Feel Differential Pressure was rectified by performed cleaned electrical connector plug of elevator feel computer. The test on ground found the problem had been solved.

At 2320 UTC, (0620 on 29 October 2018 LT), the aircraft departed from Jakarta with intended destination of Pangkal Pinang. The DFDR recorded a difference between left and right AoA of about 20° and continued until the end of recording. During rotation the left control column stick shaker activated and continued for most of the flight.

During the flight the SIC asked the controller to confirm the altitude of the aircraft and later also asked the speed as shown on the controller radar display. The SIC reported experienced„flight control problem‟.

Until the publishing of this Preliminary Report, the CVR has not been recovered, the search for CVR is continuing. The investigation will perform several tests including the test of the AoA sensor and the aircraft simulator exercises in the Boeing engineering simulator. The investigation has received the QAR data for flight for analysis.

The investigation involved the NTSB of the United States of America as State of design and State of manufacturer, the TSIB of Singapore and the ATSB of Australia as State provide assistant that assigned accredited representatives according to ICAO Annex 13.

1 History of the Flight

On 29 October 2018, a Boeing 737-8 (MAX) aircraft registered PK-LQP was being operated by PT. Lion Mentari Airlines (Lion Air) as a scheduled passenger flight from Soekarno-Hatta International Airport (WIII), Jakarta1 with intended destination of Depati Amir Airport (WIPK), Pangkal Pinang2. The scheduled time of departure from Jakarta was 0545 LT (2245 UTC3 on 28 October 2018) as LNI610.

At 2320 UTC, the aircraft departed from Jakarta using runway 25L and intended cruising altitude was 27,000 feet. The LNI610 pilot was instructed to follow the Standard Instrument Departure (SID) of ABASA 1C4.

The Digital Flight Data Recorder (DFDR) recorded a difference between left and right Angle of Attack (AoA)6 of about 20° and continued until the end of recording. During rotation the left control column stick shaker7 activated and continued for most of the flight.

At 23:24:51 UTC, the TE controller added “FLIGHT CONT TROB” text for LNI610 target label on the controller radar system as reminder that the flight was experiencing flight control problem.

At 23:25:18 UTC, the flaps retracted to 0. At 23:25:27 UTC, the automatic AND trim and flight crew commanded ANU trim recorded began again and continued for the remainder of the flight.

At 23:29:45 UTC, the TE controller instructed the LNI610 to maintain heading 050° and contact the Arrival (ARR) controller. The instruction was acknowledged by the LNI610 SIC.

At 23:30:03 UTC, the LNI610 contacted the ARR controller and advised that they were experiencing a flight control problem. The ARR controller advised LNI610 to prepare for landing on runway 25L and instructed them to fly heading 070°. The instruction was read back by the LNI610 SIC.

At 23:31:09 UTC, the LNI610 PIC advised the ARR controller that the altitude of the aircraft could not be determined due to all aircraft instruments indicating different altitudes. The pilot used the call sign of LNI650 during the communication. The ARR controller acknowledged then stated “LNI610 no restriction”.

The ARR controller then checked the last known coordinates of LNI610 and instructed the assistant to report the occurrence to the operations manager.

The ARR controller requested several aircraft to hold over the last known position of LNI610 and to conduct a visual search of the area.

Boeing issued this statement after the Indonesian government issued its preliminary report on the tragic crash of Lion Air flight 610 in the Java Sea:

The Boeing Company is deeply saddened by the loss of Lion Air Flight 610. We extend our heartfelt condolences and sympathies to the families and loved ones of those onboard.

Safety is a core value for everyone at Boeing and the safety of our airplanes, our customers’ passengers and their crews is always our top priority. As our customers and their passengers continue to fly the 737 MAX to hundreds of destinations around the world every day, they have our assurance that the 737 MAX is as safe as any airplane that has ever flown the skies.

Earlier today, the NTSC released its preliminary accident investigation report.  The report provides detailed accounts of Flight 610 and of the immediately preceding flight of the same aircraft.

The report explains that the maintenance logs for the accident aircraft recorded problems related to airspeed and altitude on each of the four flights that occurred over the three days prior to Flight 610. The logs indicate that various maintenance procedures were performed, but issues related to airspeed and altitude continued on each successive flight. The logs indicate that, among other procedures, on Oct. 27, two days prior to the incident flight, one of the airplane’s Angle of Attack (AOA) sensors was replaced.

On Oct. 28, before the flight immediately prior to Flight 610, the pilot in command and the maintenance engineer discussed the maintenance that had been performed on the aircraft. The engineer informed the pilot that the AOA sensor had been replaced and tested. The report does not include records as to the installation or calibration of the new sensor, nor does the report indicate whether the sensor was new or refurbished.  Although the report states that the pilot was satisfied by the information relayed by the engineer that the AOA sensor had been replaced and tested, on the subsequent flight the pilots again experienced problems with erroneous airspeed data, and also experienced automatic nose down trim.

The report states that the flight crew of the Oct. 28 flight turned off the stabilizer trim switches within minutes of experiencing the automatic nose down trim, and continued with manual trim through the end of the flight. The report further notes that the pilot performed three non-normal checklist procedures, including the runaway stabilizer non-normal checklist, which is a memory item prescribed by the 737 MAX Flight Crew Operations Manual, and reaffirmed in Boeing Flight Crew Operations Manual Bulletin TBC-19 and FAA Emergency Airworthiness Directive (AD) Number 2018-23-51, as the appropriate procedure to address unintended horizontal stabilizer movement, regardless of source.

The report indicates that the remainder of the Oct. 28 flight was uneventful and that the flight continued to its destination. The report also states that, after landing, the pilot reported some of the experienced issues both on the aircraft maintenance log and to engineering. The report states that the pilot ran the runaway stabilizer non-normal check list, but it does not state that he communicated that fact in the maintenance documentation following that flight.

The following day, Oct. 29, shortly after taking off, the pilots experienced issues with altitude and airspeed data that the pilots had previously experienced on the earlier flights, due to erroneous AOA data. Data from the flight data recorder summarized in the report also makes clear that, as on the previous flight, the airplane experienced automatic nose down trim. In response, the flight crew repeatedly commanded nose up trim. This sequence repeated for the remainder of the flight, during which the flight crew was able to maintain control of the airplane for approximately ten minutes. Unlike as is stated with respect to the prior flight, the report does not state whether the pilots performed the runaway stabilizer procedure or cut out the stabilizer trim switches.

In accordance with international protocol, all inquiries about the ongoing accident investigation must be directed to the NTSC.

Boeing is providing support and technical assistance to the Indonesian National Transportation Safety Committee and other government authorities responsible for the investigation into Lion Air flight 610.

The Indonesian National Transportation Safety Committee has indicated that Lion Air flight 610 experienced erroneous input from one of its AOA (Angle of Attack) sensors.

Whenever appropriate, Boeing, as part of its usual processes, issues bulletins or makes recommendations regarding the operation of its aircraft.

On November 6, 2018, Boeing issued an Operations Manual Bulletin (OMB) directing operators to existing flight crew procedures to address circumstances where there is erroneous input from an AOA sensor.

The investigation into Lion Air flight 610 is ongoing and Boeing continues to cooperate fully and provide technical assistance at the request and under the direction of government authorities investigating the accident. 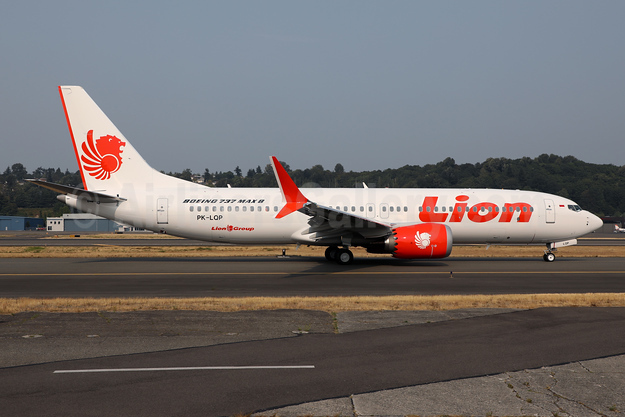