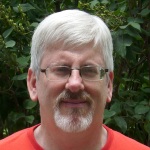 The latter half of the 1960’s were eventful for the local airlines in general, and Ozark Airlines (St. Louis) was no exception.  Starting with Mohawk’s introduction of the BAC 1-11 in 1965, the local carriers began the process of adding pure-jets to their fleets.  Ozark went a step further, ordering DC-9’s and FH-227B’s to replace its entire fleet of F-27’s, Martin 404’s and the workhorse DC-3’s.  The July 15, 1966 timetable (below) is the first to show DC-9’s in service, with a single aircraft being put to work on a 14 flight schedule that served 7 stations, as indicated by the promotional ad in the timetable.

Copyright Photo: Bruce Drum. Please click on the photo for the full view and details.

The December 1, 1966 timetable (below) shows the addition of the Fairchild FH-227B to Ozark’s fleet.

Service was inaugurated to 11 destinations with this timetable, and 4 additional stations were added 2 weeks later.  The type would eventually number 21 aircraft, one of which was lost in a crash at St. Louis in 1973.  The final revenue service (which I was fortunately able to ride) came on October 25, 1980 as Flight 848 from St. Louis to Chicago with a stop at Peoria.

Copyright Photo: Bruce Drum. Please click on the photo for the details and the full view.

Another big happening in the local airline world in the late 60’s was the growing shift towards cross-subsidies.  The government had been subsidizing the local carriers to serve points that were generally unprofitable, while profitable routes went to the trunk carriers.  Now that the local carriers were acquiring jets, they had a chance to be competitive against the trunk lines.  Cross-subsidies involved awarding some of those potentially profitable services to the locals, with the idea that those profits could reduce the amount of the subsidies paid for the other operations.  In some cases, authority was given to operate non-stop flights in major markets where stops had previously been required.  Such was the case when Ozark was awarded non-stop authority between St. Louis and Chicago as promoted on the timetable dated October 27, 1968 (below).  By November 15th, the carrier was offering 7 nonstops in each direction.

In other instances, “bypass” routes were awarded from some of the larger local stations to major cities outside of the carrier’s normal area of operation.  Ozark would receive authority to Denver, Dallas, New York and Washington from places like Sioux City, Peoria and Champaign/Urbana.  The route map from the timetable dated October 1, 1970 (below) shows the new services as well as the acquisition of Chicago – Des Moines nonstop authority. 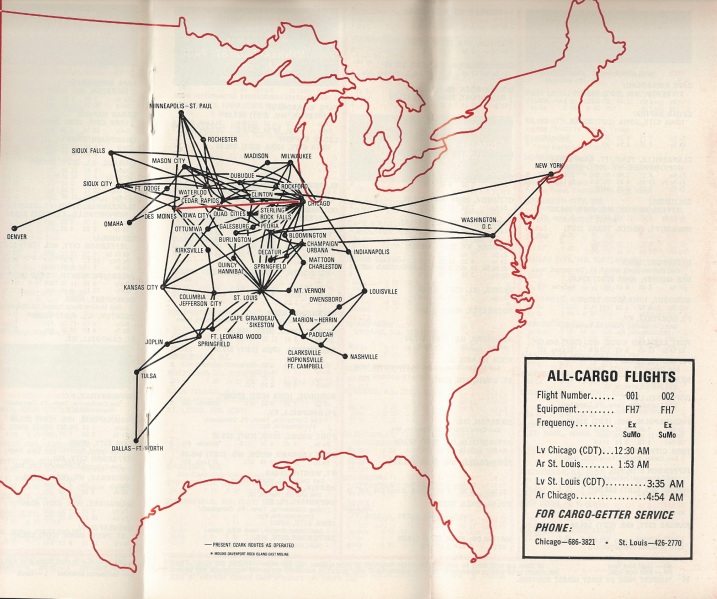 A number of local service airlines tried operating smaller aircraft that were generally considered to be commuter types.  Ozark attempted such a “commuter” operation beginning on March 12, 1972 (below) with Twin Otter service between Springfield, IL and Meigs Field in Chicago.  Flights were operated every 90 minutes on weekdays only.  This became a competition with the much smaller Air Illinois which operated a very similar schedule of flights on the route.  After less than a year, Ozark would drop the service, and Air Illinois would continue to operate the route for a number of years, utilizing an HS 748 for much of that time. 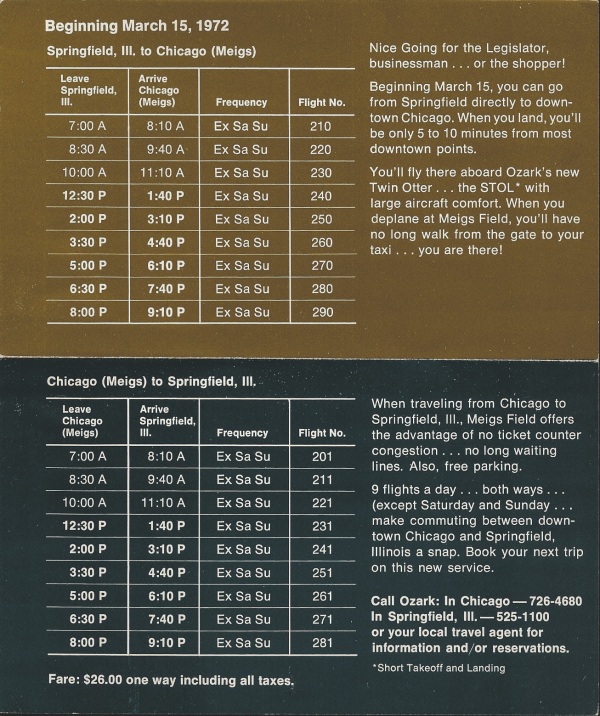 In late 1973 the airline world suffered the shock created by the Arab Oil Embargo.  Fuel quotas were established, and the airlines had to learn how to get by with less.  The impact on the local carriers was not as drastic as the trunk carriers, which removed many of their new but fuel hungry 747’s from service, as well as entire fleets of non-fan Convair 880’s, 707/720’s and DC-8’s.  The local airlines had no widebodies or first-generation aircraft, so their fleets were relatively efficient.

October of 1978 ushered in the event that has done more to shape the airline industry than any other, the Airline Deregulation Act.  This piece of legislation removed many of the barriers faced by airlines applying for authority to serve new routes (which had often been a slow and arduous process), as well as for entities wanting to create new airlines.  The initial result was the award of unused route authority to other airlines willing to provide service.  Florida was a popular choice for new service, and Ozark quickly began service to 4 destinations with their December 15, 1978 timetable (below).

A number of local carriers were looking at larger equipment to use on the new routes, and a several opted for 727’s (used -100 series aircraft or factory-new 200-series).  For its part, Ozark placed an order for 2 new 727-200’s slated for delivery in late 1979.  Unfortunately, the carrier suffered several work stoppages prior to the arrival of the new aircraft, and determined that they were no longer required given the resulting reductions in traffic.  Although at least one was painted in full Ozark colors, the type never entered service and both were sent off to Pan Am.

New services in the early days of Deregulation were frequently from stations other than the carrier’s main operations base, which was tied in to the new destinations by the continuation of the flight routings when practical.  As the ability to enter and leave routes was liberalized over the ensuing years, most of the services to new destinations realigned to provide non-stop flights from one of the airline’s chosen hubs, again leaving the outlying stations with only direct or connecting service.  The route map of the October 1, 1985 timetable (below) shows the almost-complete consolidation of routes through the airline’s hub in St. Louis.

This timetable also shows Ozark embracing the “express” concept of code-sharing with commuter airlines to provide service to smaller destinations (which had frequently been dropped by the larger carrier).  In Ozark’s case, a partnership was created with Air Midwest to form Ozark Midwest, which started with service from St. Louis to 15 destinations.

The other impact of Deregulation was the ensuing rash of airline mergers, which in some cases involved a trunk carrier buying up their principal competition.  Such was the case in 1986 when TWA purchased Ozark, ending a proud legacy spanning over 36 years.  The timetable dated August 25, 1986 was the final issue published prior to the merger.

The final “Ozark” timetables were actually issued by TWA following the merger.  At least 3 different Ozark timetables were printed, and I am told that it was due to TWA using the Ozark operating certificate for the DC-9’s until it could be transferred.  (TWA already had MD-80’s, so there was no problem with the larger type.)  Apparently, TWA felt that they needed an “Ozark” timetable if they were operating certain flights as such, and distributed a small number of copies to each station with instructions to hand them out only if asked.  (It makes no sense to me that a timetable was required to support an operating certificate, but that’s the story I was given!)

The April 5, 1987 timetable shows “Ozark” flights to Toledo, a station never actually served by the airline.  Eventually, the certificate was transferred, and Ozark Air Lines disappeared into TWA.

Comments can made directly to this WAN blog or you can contact David directly at: