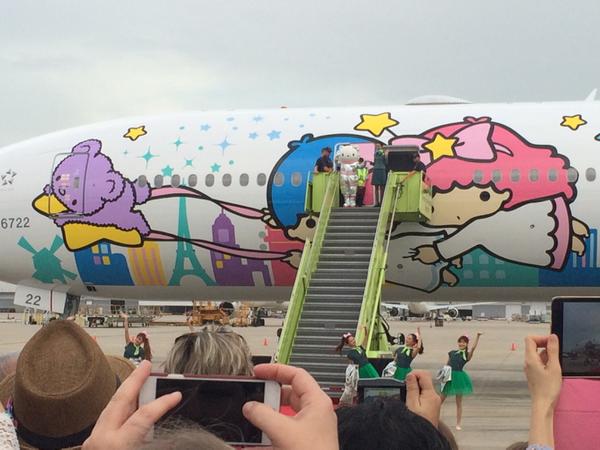 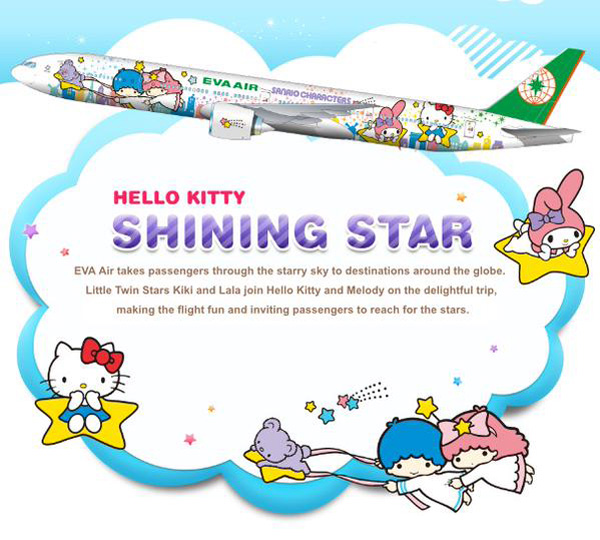 “I initiated our Hello Kitty Jet concept (above) to make flying fun. Travelers’ responses in Asia, Europe and the United States tell us we are succeeding,” said EVA Air Chairman KW Chang. “The support we have received from the City of Houston, Houston Airport Systems and Texas makes us feel welcome. By flying our latest Hello Kitty Jet and offering convenient one-stop connections to cities throughout Asia, we believe our new service will be a Texas-sized success.”

EVA worked with Sanrio to tailor a Hello Kitty Shining Star Jet livery and theme especially for Houston. The cast of colorful, Texas-sized characters painted along the length of the plane includes Little Twin Stars Kiki and Lala, flying through the skies with their pet teddy bear while Hello Kitty and My Melody happily ride along on stars. Each of EVA’s exclusive Hello Kitty Jets has its own unique livery and theme. The new EVA Hello Kitty Shining Star Jet is the airline’s seventh specially painted aircraft and its second using a long-range Boeing 777-300ER. It currently flies its other six Hello Kitty Jets from Taiwan to Japan, Korea, Hong Kong, Mainland China, Guam and Paris.

EVA is launching its passenger route between Houston’s George Bush Intercontinental and Taipei’s Taoyuan International Airports with three flights a week and adding a fourth, using a Boeing 777-300 ER with standard EVA livery, on July 8, 2015.

EVA is extending its Houston Hello Kitty Jet service by also flying the new aircraft between Taipei and Singapore, starting June 21, 2015. Singapore-bound BR215 departs Taipei at 09:25 a.m. and BR216 returns at 3:10 pm (15:10). Consistent with the Houston schedule, EVA operates Hello Kitty Jet service to Singapore on Wednesday, Friday and Sunday and will up the schedule to four flights a week, starting July 1, 2015.

The airline equipped the plane with all of the latest comforts and conveniences, including inflight Wi-Fi, global roaming and state-of-the-art entertainment systems in every seat. It configured the aircraft with 333 seats, 39 in Royal Laurel Class business, 56 in Elite premium economy and 238 in Economy.

Above Photo: The first departure flight from Houston was just after midnight on June 20.

All photos by Bush Intercontinental Airport and EVA Air.