New prospects for interconnecting the country and further enhancing of the tourist prod-uct are created by the agreement of the new era with the leading air carrier of the Middle East.

Emirates and SKY express are joining forces to offer passengers more flight options from New York and Dubai to the largest domestic network in Greece.

Passengers, flying with Emirates from Dubai and New York to Athens International Airport, will be able to continue their journey to one of the 34 Greek destinations SKY express serves. The connection is undertaken by the country’s youngest and greenest fleet and one of the most envi-ronmentally friendly in Europe, offering a special in-flight experience.

The new strategic interconnection with the leading air carrier in the Middle East is a practical recognition of the dynamics of SKY express at an international level. In addition, it gives a further boost to the country’s tourism development by creating the right conditions for visitors to arrive even from areas such as Australia, Southeast Asia and India via Dubai Airport.

Delta Air Lines and Greek carrier Sky Express have announced an interline agreement to provide convenient connections for customers between North America and Greece. Delta is offering a record number of flights between the U.S. and Athens this summer, with services from Atlanta, Boston and New York-JFK, as Greece continues to grow in popularity with American travelers.

Effective May 19, Delta customers flying from North America will be able to fly on one of Delta’s daily nonstop services to Athens then connect to 34 hotspots across Greece and Cyprus operated by Sky Express. Destinations available to Delta customers one or two stops from the United States include the picture-perfect islands of Mykonos, Kefalonia and Santorini; family favorites Crete and Corfu; and Larnaca in Cyprus.

The partnership is another milestone for Delta, offering even greater network opportunities for North American customers and improving connections to Greece. The new routes complement Delta and Sky Express destinations available through existing agreements with Air France and KLM via Paris-Charles de Gaulle and Amsterdam’s Schiphol Airport.

Sky Express operates a fleet of modern, fuel-efficient aircraft comprising A320neo and ATR 72-600 aircraft suited to the geographical environment of the Greek islands.

Sky express strengthens Crete even more in order to increase the connectivity of the island, create the conditions for arrival of visitors and lengthen the period with premium visitors.

In addition, from the airports of the two major cities, there will be routes to five domestic destinations, namely Athens, Rhodes, Thessaloniki, Volos and Karpathos, while the airport of Sitia continues to serve domestic flights to Preveza and Alexandroupoli.

The country’s youngest and greenest fleet and one of the most environmentally friendly in Europe unites Crete with a network of domestic and European cities, contributing actively to the further promotion of the island as a top choice in terms of tourism and entrepreneurship. At the same time, through the strategic agreements with global carriers such as Air France, KLM, Qatar Airways, American Airlines, Cyprus Airways, Condor, El Al, Middle East Airlines, Transavia, Air Transat and easyJet, SKY express creates additional conditions for interconnection with its entire internal network.

For the rest of the summer schedule:

New destinations are added to the existing network of London, Paris, Rome, Brussels and Larnaca. Amsterdam, Lisbon, Lyon, Lille, Marseille and Nantes, Copenhagen and Bilud, Denmark, Warsaw and the cities of Gdansk, Poznan, Rzeszów and Wroclaw in Poland, Tallinn in Estonia and Timisoara in Romania will enhance SKY express’ flight work for this summer.

The company that changed the landscape in the country’s aviation continues its continuous growth as it now becomes a member of the growing network of Dohop airlines on Worldwide by easyJet.

SKY express is part of the cooperation program with the Dohop network, in order to expand the destinations as well as to offer long-haul flights, throughout Europe and beyond. SKY express, which operates domestic flights and flights to major European destinations, is now integrated into the Worldwide by easyJet’s network.

SKY express cooperation with Dohop further strengthens a strategic international destination, as Dohop’s virtual interline technology will enable SKY express passengers to combine affordable flights to major destinations across Europe and the Middle East. Passengers wishing to purchase a ticket to any of the Worldwide destinations will be able to do so with a single booking process. 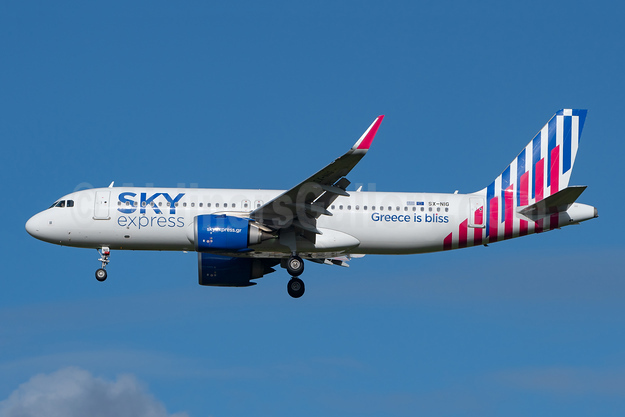 Sky Express has made this announcement:

Sky Express’s on-line cooperation with Condor further strengthens a strategic European destination, as it provides the possibility of booking a single ticket on the network of both airlines.

Condor is based in Frankfurt Airport, connecting the seven largest airports in Germany, Zurich in Switzerland, and soon Vienna in Austria with around 90 destinations in Europe, Africa and North America. Respectively, Sky Express operates in important European countries and 34 Greek destinations.

“We want to thank Condor for cooperating with us. We continue our continuous efforts and this gives us the opportunity to form more new collaborations with important airlines in our area. This cooperation strengthens our strategy, our main goal being to offer our passengers more options, but also to strengthen the potential of our country as a dynamic travel destination”, underlined Mr. Yiannis Lidakis, Commercial Director Sky Express.

Condor has made this announcement:

From July 2022, Condor guests will be able to travel on comfortably via Athens, Rhodes, Corfu and Heraklion to the eleven new destinations, including popular destinations such as Naxos, Paros and Mytilini. From Germany, guests fly from Berlin, Düsseldorf, Frankfurt, Hamburg, Munich and Leipzig.

Effective by the end of October, SKY Express will a new international route linking Thessaloniki with Larnaca. The new route will be operated with Airbus A320neo aircraft.

SKY express initiates the first route that connects Thessaloniki, the historic city of Macedonia, with Cyprus! From October 31, the brand-new Airbus A320neo will be executing flights be-tween Thessaloniki International Airport “Macedonia” and Larnaca International Airport four times a week. The route broadens the options of passengers while creating new opportunities for interaction between the two popular destinations.

This is in addition to Thessaloniki’s existing domestic network (Heraklion, Mytilene, Chios, Samos and, of course, the daily flights to Athens).

SKY Express and ATR have announced the delivery of an ATR 72-600 aircraft.

This deal represents a new country of operations for the ATR 72-600 which is currently flying in over 50 countries around the world. With a fleet of 10 ATR -500 series aircraft, the airline has opted to continue its long relationship with ATR for its fleet modernization project.

When the ATR 72-600 enters into service later this month, it will be the first step in ensuring continued and sustainable operations to Greece’s many islands.

In other news, the Greek carrier recently took delivery of its 6th Airbus A320neo.

Sky Express Airlines will launch the Athens-Brussels route on May 16 with Airbus A320s.

The new route will be operated six days a week.