The arrival of Air Canada flight AC 856 from Toronto (Pearson) at 07:04 GMT marked the official move of all Air Canada flights and operations to London Heathrow Airport Terminal 2: The Queen’s Terminal. The modern and spacious facilities of Heathrow Airport’s new terminal provide customers with an improved travel experience including faster customs and immigration border control upon arrival and check-in and security clearance on departure. Eligible Air Canada and Star Alliance customers will have access to Air Canada’s newest international Maple Leaf Lounge also offering a stylish and inspiring environment in which to relax or work before a flight.

Air Canada check-in and baggage drop off are located in Zone A of the check-in lobby and offer the latest technology including quick and easy self-service kiosks, fast baggage drop-off and dedicated full-service check-in counters. The new terminal provides a wide variety of shopping, dining and seating options in a light, airy and spacious building.

The first phase of the rebuilding of Terminal 2 at London’s Heathrow Airport (LHR) opened today (June 4) for the Star Alliance. United Airlines operated the first flights from the new T2.

The Star Alliance has issued this statement:

The new Terminal 2 – the home of Star Alliance at Heathrow – threw open its doors to welcome its first passengers, marking the start of a new travel experience for the 12 million Star Alliance passengers who pass through this leading UK airport every year. Star Alliance member airline United is the first to move in to the new facility, known as Terminal 2 | the Queen’s Terminal for her Majesty Queen Elizabeth II.

All 23 Star Alliance airlines operating Heathrow will move over the next six months: the first time all member airlines will be collocated at the airport. “After many years of planning and construction, tests and optimisation, we at Star Alliance are proud to welcome the first passengers into the new terminal,” said Star Alliance CEO Mark Schwab. “It is particularly fitting that one of our five founder members, United, should operate the first flights from this terminal, which sets new standards for Alliance customer service and seamless travel at this important hub airport.”

Terminal 2, designed by lead architect Luis Vidal, was jointly developed by Heathrow, Star Alliance and its member carriers, with the aim of establishing a true seamless hub at one of the world’s premier international airports. Optimised for today’s air traveller, the facilities of the 23 Star Alliance airlines are integrated to an unprecedented level – laying the groundwork for customer service excellence.

Once all airlines are in residence, connections for transfer passengers will be smoother than ever before at Heathrow, with a standardised minimum connection time of just 60 minutes. Move dates for the remaining 22 airlines have been carefully planned to ensure that each group of airlines has time to embed its operations before the next set of carriers moves in.

Air Canada, Air China and ANA will be the next new occupants, transferring their operations to T2 from June 18th. In July, Aegean, EVA Air, THAI, and Turkish Airlines will move in, together with Avianca – which will launch a service between London and Bogota on July 4th. After a break for the European summer holiday period, moves will resume in September with EGYPTAIR, Ethiopian Airlines, Scandinavian Airlines and Singapore Airlines. Then finally, October sees the arrival of Air New Zealand, Asiana Airlines, Austrian, Brussels Airlines, Croatia Airlines, LOT Polish Airlines, Lufthansa, South African Airways, SWISS and TAP Portugal.

A positive tone for the passenger journey is set by the architectural design of the terminal, which uses natural light to create an open and airy atmosphere. Its open-plan check-in facility is directly adjacent to the security area. Passengers exit security on the top level of a two-tier international departures hall, with a clear view out onto the airport. This is just one example of the logical passenger flows that underpin the terminal’s design.

Departing and arriving passengers pass through the building on different levels, guided by clear signage. Transfer passengers follow a separate channel from the arrival gate to security and then join the departing passengers flow. Technology is integrated into the terminal experience and will be used throughout to give the passenger control of their journey. The check-in area has been specially designed for speed and efficiency.

Airlines are grouped in zones, while a row of 81 common use self-service kiosks can be used by any passenger to check in and/or print a bag tag before they proceed to a bag drop desk to hand their luggage to an agent. Full-service traditional check-in desks are provided for the use of First Class, Business class and Star Alliance Gold passengers. Premium passengers also have a fast-track option to speed them through the security checks.

Eight out of 12 gates at the T2B satellite will allow self-boarding, meaning passengers simply pass through a mechanical barrier to board their flight. Four airline lounges will be available for premium passengers, including those with Star Alliance Gold status. These are located in the main terminal building and the satellite, so eligible passengers can relax close to their gate.

The 23 Star Alliance airlines serving Heathrow are Aegean Airlines, Air Canada, Air China, Air New Zealand, ANA, Asiana Airlines, Austrian, Avianca*, Brussels Airlines, Croatia Airlines, EGYPTAIR, Ethiopian Airlines, EVA Air, LOT Polish Airlines, Lufthansa, Scandinavian Airlines, Singapore Airlines, South African Airways, SWISS, TAP Portugal, Turkish Airlines, THAI, and United. Together they operate over 121 flights per day to 45 destinations in 25 countries. Each of these flights acts as a gateway to the full Alliance network of more than 18,000 daily flights to 1,269 airports in 193 countries. The strong Star Alliance hub at Heathrow is expected to act as a catalyst for growth in global passenger traffic to London and to increase the attractiveness of Heathrow as an international transfer airport. It will enhance Heathrow’s standing for the truly frequent international traveller.

United flight 958 was the first of United’s 17 scheduled flight arrivals at Terminal 2 today. The airline also is scheduled to operate 17 departures from the terminal today, bringing all of its operations at Heathrow – previously split between Terminals 1 and 4 – “under one roof” for the first time. 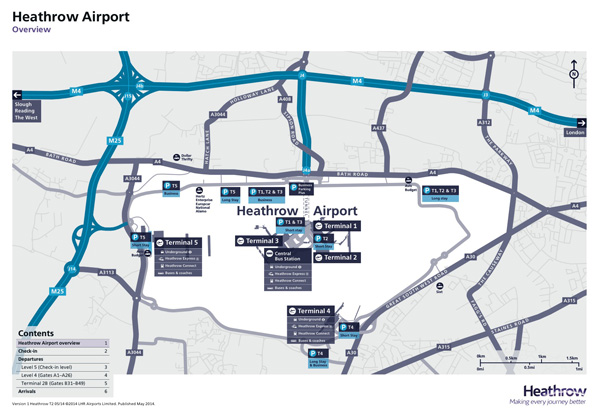