Here are a few key facts:

To read the full article from CompanyDebt: Could Heathrow be at Risk of Collapse? – Company Debt

London’s Heathrow Airport (LHR) has made this announcement:

Heathrow has announced its statutory 12 and a half-week consultation on expansion plans will launch on the 18th of June. This step is the latest delivery milestone for the critical national infrastructure project, and the responses received will feed into a final planning application.

To mark the news, the airport has released a series of new images showing a proposed new terminal forecourt, as well as a panoramic shot of a future Heathrow.

The airport’s June consultation will be its largest and most innovative engage exercise yet. Heathrow has invested in new technology to show the public its current proposals, including a model of the future airport which uses augmented reality, and a sound booth which features virtual reality to demonstrate the effect of noise insulation on properties overflown by aircraft.

Having listened to feedback from previous consultations, Heathrow will be holding events in more locations than previously and, in addition to an extensive national marketing campaign across newspapers, radio, billboards, digital and – for the first time – Spotify, will be contacting 2.6 million households directly encouraging participation.

The consultation follows the High Court’s dismissal of legal challenges against Heathrow expansion. The debate on Heathrow’s plans – and its commitments to grow sustainability – has been had and won, both in Parliament and now in the courts.

Heathrow has consistently demonstrated best practice by holding additional consultations at earlier stages of its project development to ensure feedback is incorporated in its plans, and to be as transparent as possible about its emerging proposals.

The plans revealed in this consultation include the consolidated feedback received in the Airspace and Future operations consultation that concluded in March, and previous consultations last year, as well as from Heathrow’s continuous engagement with local communities, local authorities, airlines, and other interested parties.

The upcoming consultation will seek feedback on four key areas:

“Heathrow’s expansion is a project of huge national and local significance, and it is critical to our country’s economic growth. An expanded hub airport will allow the country to access more of the world, create thousands of jobs locally and nationally and it will open up new trading routes. But we can’t deliver these plans alone. We urge everyone to have their say in this consultation, to shape our plans, and to help us deliver expansion in the fairest and most sustainable way.”

Heathrow’s expansion is a project of huge national and local significance, and it is critical to our country’s economic growth. An expanded hub airport will allow the country to access more of the world, create thousands of jobs locally and nationally and it will open up new trading routes. But we can’t deliver these plans alone. We urge everyone to have their say in this consultation, to shape our plans, and to help us deliver expansion in the fairest and most sustainable way.

Following the conclusion of this consultation and after feedback has been incorporated, Heathrow will submit a final proposal to the Planning Inspectorate in 2020, kickstarting an 18-month approvals process. The decision on whether to grant the DCO will be made by the Secretary of State following a public examination period led by the Planning Inspectorate.

British Airways (London) has announced that it will begin service between Mineta San Jose International Airport and London Heathrow Airport from May 4, 2016. This marks the first regularly scheduled nonstop service to the UK for the city of San Jose. British Airways will operate the newest aircraft in its fleet, a Boeing 787-9 Dreamliner, featuring the airline’s newly designed First cabin.

San Jose will be the fourth Californian city from which British Airways flies, following Los Angeles, San Francisco and San Diego. Earlier this year British Airways introduced its super jumbo Airbus A380 onto San Francisco, providing customers with comfort, space and enhanced wellbeing for their trip to London.

The 787-9, the first of which is due to be delivered to British Airways in September, is 20 feet longer that its 787-8 predecessor, so as well as offering World Traveller (economy), World Traveller Plus (premium economy) and Club World (business class), there’s also room for a new First class cabin – a first for the airline’s 787 fleet. 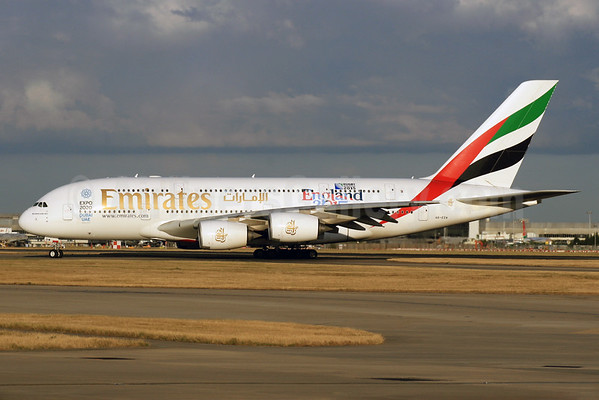 Emirates (Dubai) is moving to a triple-daily all-Airbus A380 scheduled operation at London’s Gatwick Airport starting on January 1, 2016. The third daily A380 roundtrip flight will replace the lone existing Boeing 777-300 ER flight according to Airline Route.

The carrier dominates the Dubai – London market with five additional daily Airbus A380 flights to Dubai from nearby London Heathrow Airport. This is a total of eight daily Airbus A380 roundtrip flights in one market.

Heathrow, which is the UK’s busiest airport, reported earlier: “There is a power outage at the NATS control center in Swanwick which is affecting UK airspace.”

“Flights are currently experiencing delays. We will update passengers as soon as we have more information.”

London Gatwick, Stansted and Luton Airports are accepting arrivals but have suspended departures.

A number of flights were held over the English Channel.

Manchester Airport meanwhile says it is unaffected by the airspace closure and claims it is ready to accept any London bound diverted flights..

London airspace has been effectively closed until 7pm due to a power outage at a control centre.

People travelling have been warned to expect severe delays.

NATs have said: “We can confirm that a technical problem has been reported at Swanwick air traffic control centre. We apologise for any delays and our incident response team has been mobilised. Every possible action is being taken to assist in resolving the situation and to confirm the details. Further information will be released as it becomes available.”

The state-of-the art centre at Swanwick has been subject to a number of computer glitches since Nats moved there from its old headquarters in West Drayton in west London in the early part of the last decade.

One of the worst problems was a year ago – on Saturday December 7 2013 – when thousands of passengers were left stranded when hundreds of flights were grounded following a technical fault at the Hampshire centre.

Bottom Image: SPA. A rare radar image – no flights airborne over the London area during the ground stop.

American Airlines (Dallas/Fort Worth) on the heels of the Delta PHL-LHR announcement, has announced it will start new daily daytime service from Philadelphia International Airport (PHL) to London Heathrow Airport (LHR) on March 29, 2015.

The new flight will be operated with a US Airways Boeing 757-200 on the following schedule:

American’s PHL-LHR service will continue to be operated as part of the airline’s joint business agreement with fellow oneworld® member British Airways. Together, the two airlines offer customers four daily flights year-round between Philadelphia and London. From London, American’s customers have access to more than 70 destinations in Europe on British Airways.

The largest airline in the world also is the airline with the most extensive network out of Philadelphia.

American offers more than 475 daily flights to 124 destinations from its PHL hub.

International Airline Group’s (IAG) (British Airways, Iberia and Vueling Airlines) (London) CEO Willie Walsh has stated the politicians of Britain lack the “character” to push for a third runway at London’s crowded Heathrow Airport (LHR) according to a report by The Guardian. According to Walsh the expansion of LHR is a “lost cause”.

Top Copyright Photo: Ariel Shocron/AirlinersGallery.com. Terminal 5 at London Heathrow Airport. T5 was opened in 2008, the main building is the largest free-standing structure in the United Kingdom. Terminal 5 is currently used exclusively by IAG carriers, especially British Airways and Iberia. Prior to March 2012, the terminal was used exclusively by British Airways. The terminal is designed to ultimately handle 35 million passengers a year. Despite this new terminal, the airport cannot expand without a third runway.

Video: The three options for a third runway at LHR offered by the airport:

Below Copyright Photo: Dave Glendinning/AirlinersGallery.com. LHR is the main hub of British Airways.

Bottom Copyright Photo: Richard Vandervord/AirlinersGallery.com. A crowded ramp scene at LHR in the past.

The arrival of Air Canada flight AC 856 from Toronto (Pearson) at 07:04 GMT marked the official move of all Air Canada flights and operations to London Heathrow Airport Terminal 2: The Queen’s Terminal. The modern and spacious facilities of Heathrow Airport’s new terminal provide customers with an improved travel experience including faster customs and immigration border control upon arrival and check-in and security clearance on departure. Eligible Air Canada and Star Alliance customers will have access to Air Canada’s newest international Maple Leaf Lounge also offering a stylish and inspiring environment in which to relax or work before a flight.

Air Canada check-in and baggage drop off are located in Zone A of the check-in lobby and offer the latest technology including quick and easy self-service kiosks, fast baggage drop-off and dedicated full-service check-in counters. The new terminal provides a wide variety of shopping, dining and seating options in a light, airy and spacious building.