Tianjin Airlines, one of the fastest-growing airlines in Chinahas acquired its 100th aircraft, an Airbus 321, B-302X.

Tianjin Airlines’ fleet has grown to 100 aircraft just 9 years after the official start of operation, providing services to over 70 million passengers in total and making their trip more efficient and more fun.

The chief executive officer of Tianjin Airlines, Mr. Liu said: “It is an honor for the airlines to reach the milestone of 100 aircraft. Tianjin Airlines now operates a young fleet of Airbus A330, Airbus A321, Airbus A320, Embraer 195 and Embraer 190, supporting 270 international and domestic air routes and more than 130 destinations covering three continents.

According to Tianjin Airlines, this new aircraft is specially painted and the paint scheme represents Tianjin’s city image and focuses on several Tianjin city landmarks, showing Tianjin Airlines’ great gratitude towards the city and passengers.

Holding the brand image of “All ways with you”, Tianjin Airlines will continue to update the fleet, aiming to provide convenient service and products, as well as create wonderful travelling experience with passengers.

Tianjin Airlines, owned by HNA group has acquired a new Airbus A330-300 aircraft from Toulouse on July 17, 2018, which is Tianjin Airlines’ third new aircraft this year, hitting back at delivery delay rumors.

The new aircraft will will debut on the Auckland-Chongqing-Tianjin route.

Tianjin Airlines, founded in 2009, is based in Tianjin, China. As of today, Tianjin Airlines operates a fleet of 98 aircraft, which includes 33 Airbus A330, A320, and A321 aircraft. The new aircraft joins the four A330’s already in the fleet as the ninety-ninth aircraft of the Airlines.

This Airbus A330-300 is able to seat 303 passengers with 279 seats in economy class and 24 seats in upper class. The upper class seats are in a herringbone arrangement that allows passengers to enjoy flat beds and increased privacy while maintaining direct access to the aisle. All 279 economy class passengers can experience Thales Avant in-flight entertainment system and a 110v power supply  and a USB port.

Tianjin Airlines announced that they continue to take to the skies, adding flights from Tianjin to Tokyo and Osaka, with more flights planned from Tianjin, Xi’an, and Chongqing to London, Melbourne, Sydney and Auckland.

All images by Tianjin Airlines. 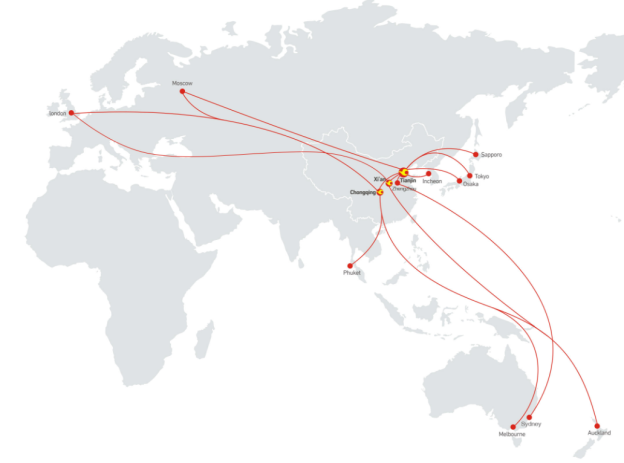 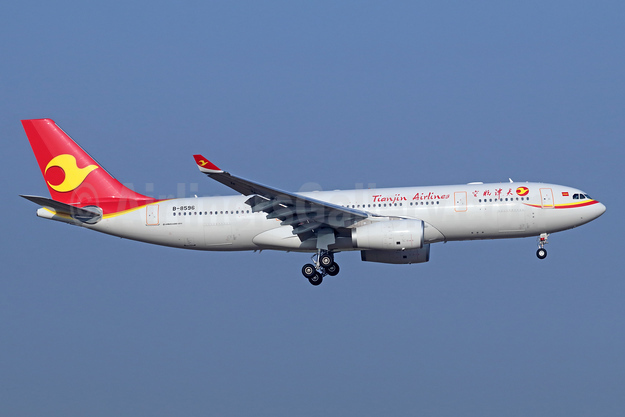 Tianjin Airlines launched a new nonstop flight from London (Heathrow) to Xi’an on Monday, May 7, 2018, connecting the UK capital to the eastern departure point of the ancient Silk Road for the first time. Xi’an is the capital city of Shaanxi province.

The Airbus A330-200 aircraft, departs at 3:15 pm from Xi’an Xianyang International Airport and will arrive at London Heathrow Airport after a 14-hour journey.

Flight GS7987 offers a twice-a-week service on every Monday and Friday, carrying up to 260 passengers.

The service is the airline’s second Britain–China air route after Tianjin–Chongqing–London flight that started in June 2017, linking Beijing’s neighboring megacity Tianjin and Chongqing to Britain.

The airline connects Xi’an to more than 40 cities and operates over 200 flights per week with 15 aircrafts. Tianjin Airlines is the 4th largest airline by market share in Xi’an. Connecting Europe and Asia is only part of the airline’s global expansion plan. It also launched a cross-hemisphere service from Xi’an to New Zealand in December 2017. Flights to America are also planned.

Tianjin Airlines will celebrate its 9th anniversary on June 8.

The airline is also planning to serve Sydney with twice-weekly service starting on January 29, 2018 per Airline Route. 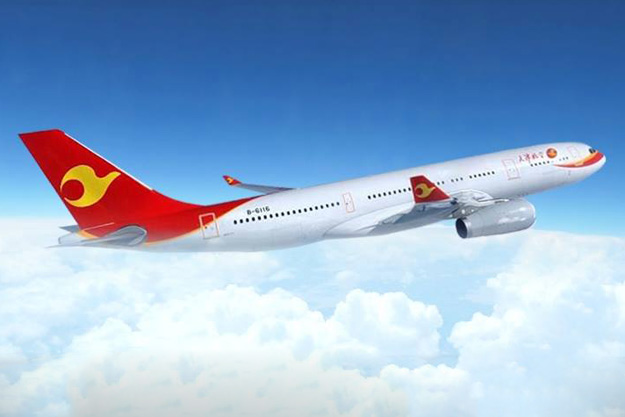 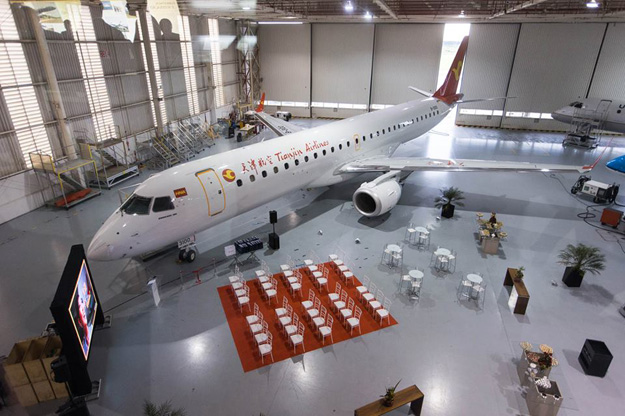 Embraer announced that it delivered the first two E195 jets to Tianjin Airlines (Tianjin, China), the launch customer of this aircraft model in China. These two aircraft are part of the sales agreement Tianjin Airlines signed with Embraer in 2014 for 20 E195 and 20 E190 E2 jets, during Chinese President Xi Jinping’s visit to Brazil.

Du Xiaoping, President of Tianjin Airlines, said the incoming E195 fleet will play a strategic role to the company’s development. “We are very satisfied with the current E190 fleet we are operating and we believe the new E195 fleet, with more seats and equally excellent operational economics, will allow us to meet the surging demands of air travel in China and help achieve our development goals.”

To date, Embraer Commercial Aviation has achieved an 80% share of the Chinese regional aviation market. Currently, Embraer has 224 firm orders in China, including 188 firm order (21 aircraft are pending government approval) for commercial jets, 130 of which have been delivered.

Embraer has issued this statement about a new order from Tianjin Airlines (HNA Group) (Tianjin):

During Chinese President Xi Jinping’s State visit to Brazil, in a signing ceremony witnessed by the Presidents of both nations, Embraer S.A. concluded an agreement for the sale of 40 aircraft to China’s Tianjin Airlines, a subsidiary of the HNA Group. The contract, with an estimated value of $2.1 billion at list prices, is comprised of 20 E-Jets and 20 E-Jets E2, which also makes HNA Group and Tianjin Airlines the first Chinese airline to order the E-Jets E2 model.

The first current generation E-Jet will be delivered in 2015, and the first E-Jet E2 is scheduled for delivery in 2018. This order will be incorporated in Embraer’s backlog as soon as Embraer receives the initial payment from the customer.

The first delivery of an E-Jet E2 is planned for the first semester of 2018.

The Embraer-Tianjin Airlines partnership is well established. Tianjin Airlines was the launch customer for the E190 in China and operates the largest E-Jets fleet in Asia with 50 E190s in its fleet. It is also the first carrier in China being appointed as an Authorized Service Center for Embraer aircraft in that country. Recently, the carrier announced to install Embraer AHEAD-PRO system for all its 50 E190s, becoming the first user of this system in China.

HNA Group Tianjin Airlines was launched as the first true regional airline in China in 2009. In 2010, the carrier changed its focus from purely regional operations to a combination of mainline and regional services. Its aim is to become a medium to large-size international airline as it pursues a new “regional aviation and global operations” strategy. In 2011, Tianjin Airlines received the “Best Regional Aviation Airline in China” and “Global Four-star Airlines” awards from Skytrax for its outstanding achievement. Today, the carrier operates a fleet of over 80 jets that serves some 90 domestic and international cities and carries over 8 million travelers.

The East Asian Games is a multi-sport event organized and promoted by the East Asian Games Association (EAGA). The games are held every four years with athletes from East Asian countries and territories of the Olympic Council of Asia (OCA), as well as the Pacific island of Guam.

Tianjin Airlines is a sponsor of the 2013 Games. The pictured Airbus A320 was dedicated and unveiled at Tianjin Binhai International Airport on the morning of July 15, 2013.

Tianjin Airlines is a joint venture of the Tianjin Municipal Government and the HNA Group.

Copyright Photo: Kok Chwee (K. C.) Sim/AirlinersGallery.com. Formerly operated by defunct Bahrain Air as A9C-BAO, this Airbus A320-214 was leased from GECAS on June 21, 2013 as OE-ICD. The airliner will become B-9963. OE-ICD is pictured taxing at Steletar Airport in Singapore.