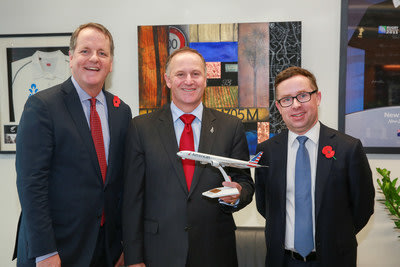 The two CEOs met earlier in the day with New Zealand Prime Minster John Key to present details of American’s new service that is planned to operate on the following daily schedule starting in June 2016 (all times local):

American plans to operate its new daily service between LAX and AKL with the newest addition to its fleet, the Boeing 787-8 Dreamliner.

United Airlines, the U.S. airline with the most comprehensive route network and the most trans-Pacific service, will further expand its global reach with new nonstop service from San Francisco to:

Each new service is subject to government approval.

The airline intends to operate the new flights with the Boeing 787 Dreamliner, the world’s most advanced passenger airplane.

As part of United’s evaluation for serving San Francisco (SFO) to Tel Aviv (TLV) nonstop, the airline considered the opinions of thousands of customers who petitioned for the service through the SFOTLV.ORG petition effort.

United’s three-times weekly service to Auckland (AKL), New Zealand’s largest city and main transportation hub to other points throughout the country, will launch July 1, 2016, with 787-8 aircraft. The schedule will expand to daily flights operating with 787-9 aircraft on Oct. 28, 2016, in time for the peak-winter travel season.

United currently has 22 787 Dreamliners in its fleet and expects to take delivery of three more by the end of 2015.

However Air New Zealand will operate the aircraft on a Farewell Tour around New Zealand from September 8 through September 21 under the following schedule:

Thank you to Colin Hunter for the above information from New Zealand.

Air New Zealand (Auckland) is tentatively planning to retire its last Boeing 737 from revenue in September. The airline is planning to operate the last Boeing 737-300 revenue flight on September 6 as flight NZ 557 from Auckland to Christchurch according to Airline Route.

Air New Zealand (Auckland) has announced it will expand its North American presence by opening a fifth gateway this December. The airline will soon provide nonstop service between Houston, Texas and Auckland, New Zealand up to five times per week.

The Auckland – Houston (Bush Intercontinental) route will start on December 15 and will operate five days a week.

Air New Zealand, celebrating its 75th anniversary on April 30, is also set to commemorate 50 years of flying from North America later this year. The airline began service from Los Angeles to Auckland (via Nadi & Honolulu) on December 14, 1965. With the addition of Houston, Air New Zealand will offer nonstop service to New Zealand from five North American gateways, also including Los Angeles, San Francisco, Vancouver and Honolulu.

Air China (Beijing) and Air New Zealand (Auckland) have released details of a proposed alliance on services between China and New Zealand.

The alliance, subject to regulatory approvals, would see Air China introduce a daily nonstop service between Beijing and Auckland.

The Chinese flag carrier would also continue to codeshare on Air New Zealand’s daily Shanghai – Auckland service which will be operated exclusively by Boeing 787-9 Dreamliner aircraft from August 24.

The proposed alliance would further open up Beijing as a new market to and from New Zealand and the airlines aim to almost double sustainable capacity between China and New Zealand while delivering a range of other benefits to travellers including greater frequency and network connections.

Subject to regulatory approvals, alliance services could commence as early as December 2015.

The four-times weekly flights CA 165/6 will be offered on Monday/Wednesday/Friday/Sunday. The service is slated to increase to daily from October 25, 2015. The outbound flight departs from Beijing at 02:00 and arrives in Melbourne at 15:30 local time; the return flight departs from Melbourne at 20:40 local time and arrives in Beijing at 06:30. The flights will be operated with Airbus A330-200 aircraft.

Finally, Air China will add flights to its Beijing-Los Angeles route from May 2015, further strengthening its presence on the North American market.

The new flight numbers are CA 887/8. From May 2 to June 30, 2015, four flights will be offered per week on Tuesday, Thursday, Saturday and Sunday. From July 1 to October 24, the flights will be increased to daily. The outbound flight departs from Beijing at 12:00 and arrives in Los Angeles at 09:00 local time. The return flight departs from Los Angeles at 11:30 and arrives in Beijing at 15:10 local time. Boeing 777-300 ER, an aircraft type quite popular with the world’s business travelers, features full-flat seats in First Class/Business Class as well as Central Bar, personal AVODs and power outlets in all classes of service, accessible toilet and mood lighting system which can mimic wonderful moments from sunrise to sunset.