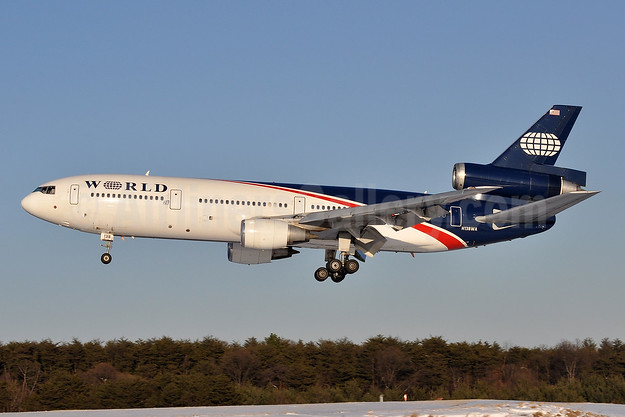 777 Partners, a US based investment firm, announced on November 8, 2017 that it has acquired the intellectual property of World Airways, Inc., the iconic US airline known for its worldwide operational capabilities,  and is planning to re-launch World Airways as a low cost, long haul airline flying state of the art Boeing 787 Dreamliner aircraft. Initial funding for certification and aircraft acquisitions is being provided by 777 Partners. Discussions are underway with Boeing for an initial order for up to ten (10) 787-aircraft.

Ed Wegel, founding CEO of World (formerly of Eastern Air Lines 2nd) commented, “World has a rich and storied history dating back to 1947. It was once the world’s largest independent charter airline, and served the US military and other clients with great distinction for many years.

“Today, we are proud to begin preparations to launch scheduled operations from the US to Asiaand Latin America. We will be partnering with low cost, short haul carriers in the US and in the regions we serve to provide connecting traffic to and from our initial planned gateways. We plan to announce our new brand look and feel within the next few weeks, under the direction of our Founding CMO, Freddie Laker.”

Managing Partner of 777 Partners, Josh Wander, said, “777 Partners is humbled by the opportunity to participate in the relaunch of World, a seminal brand in the history of US commercial aviation. We are determined to pay proper homage to World’s rich heritage by delivering a transformative flying experience rooted in safety, technology and service to the large segment of the traveling public historically priced out of international travel.”

World Airways will be the first long haul wide body low cost carrier based in the US. It will operate the Boeing 787 on routes from the US  to Asia and Latin America, and plans to be based at Miami International Airport with planned initial operating hubs at MIA and LAX.

Global Aviation Holdings and many of its subsidiaries, including World Airways, began restructuring on November 12, 2013. World Airways has been in the marketplace for some months seeking funding to help it restructure in chapter 11 bankruptcy, and has been unable to secure that financing. Tuesday, World Airways’ first lien holder declared World in default on its loan and stopped providing the airline funding. World Airways has started the process of winding down its operations. Today the company laid-off 325 employees, including 109 pilots and 146 flight attendants.

Eric Bergesen, World Airways’ Chief Operating Officer, said, “The battle to save World has been difficult. A lot of people have worked hard to try to save our airline. Despite this regrettable outcome, I sincerely thank each of our employees for their dedication and continued support as we attempted to build a future for the company.”

North American Airlines will continue operations with plans to emerge from bankruptcy in the near future. North American was founded in 1989 and operates passenger charter flights using Boeing 767-300 ER aircraft.”

World Airways has been a long time operator going back to May 1948.

Previously on November 12, 2013, parent Global Aviation Holdings and its subsidiaries, including its two operating airlines World Airways and North American Airlines, filed voluntary petitions again for relief under Chapter 11 of the United States Bankruptcy Code in the United States Bankruptcy Court for Delaware. During the reorganization, Global Aviation Holdings announced it intended to continue to operate.

Video: The many exploits of World Airways through the years:

The holding company announced “that to achieve a cost and debt structure that is industry competitive and continue to provide outstanding service to its customers, it has commenced a financial restructuring through the voluntary filing of petitions to reorganize under Chapter 11 of the U.S. Bankruptcy Code in the United States District Court for the Eastern District of New York. During the restructuring, the Company and its subsidiaries will continue to operate as normal, without interruption.

The Company’s Board of Directors determined that a Chapter 11 reorganization provides the most effective and efficient means to restructure with minimal impact on the business, and is in the best interest of the Company, its stakeholders and customers.

Global has filed motions with the Court seeking interim relief that will ensure the Company’s ability to continue all of its normal operations, including the ability to provide employee wages, healthcare coverage, vacation, and other benefits without interruption; honor customer programs; and pay vendors and suppliers for post-petition goods and services. Such motions are standard and the Company anticipates receiving approval from the Court within the next several days. Vendor and supplier invoices incurred prior to the commencement of the Company’s Chapter 11 case that have not been paid will be resolved through the Company’s Plan of Reorganization, which requires Court approval and has yet to be submitted.

Global, through its subsidiaries World Airways and North American Airlines, is the largest provider of military transport services through the Air Mobility Command. World Airways was founded in 1948, and received its first government contract to provide supplemental airlift to the U.S. military in 1951 during the Korean conflict. North American, founded in 1989, also flies for the U.S. military, as well as international and domestic charter services to a broad customer base that includes major U.S. corporations, domestic and international airlines, presidential campaigns, the White House press corps, entertainers and production companies.

Global’s lead counsel in connection with the restructuring is Kirkland & Ellis LLP and its financial advisor is Rothschild.”

World Airways (Atlanta) has extended its cooperation with Allied Air Cargo for the lease of two McDonnell Douglas MD-11F aircraft beginning in January 2012 for service between Europe and various cities in Africa. World Airways, a subsidiary of Global Aviation Holdings Inc., began operating aircraft for Allied Air in October 2008.

Allied Air is a Nigerian all-cargo airline operating four Boeing 727 freighters in addition to the two MD-11 freighters leased from World Airways. Allied works closely with its worldwide sales agent, ANA Aviation Services, to provide scheduled flights and ad hoc charter services. Allied Air carries more than 400 tons per week of fresh flowers and vegetables from both Kenya and Uganda to the major European markets in Holland and the United Kingdom.

World Airways (Atlanta), a subsidiary of Global Aviation Holdings Inc., has reached an agreement with Asiana Airlines (Seoul-Incheon) to operate one Boeing 747-400F freighter on a full-time basis beginning in September 2011. World will provide additional capacity for Asiana’s cargo network, connecting its hub at Incheon International Airport near Seoul, South Korea, with West Coast markets in the United States.

World Airways (Atlanta) is extending its lease agreement with Cargolux to operate one Boeing 747-400 freighter aircraft on a full-time basis beginning in July 2011.

World Airways (Atlanta) (subsidiary of Global Aviation Holdings) has reached an agreement with Saudi Airlines Cargo Company (SACC) to operate one Boeing 747-400 freighter on a full-time basis beginning in June 2011. Under the agreement, World will provide capacity for SACC’s expanding network in the Middle East, Africa and Europe.

Copyright Photo: Wade DeNero. Please click on the photo for the aircraft details.

World Airways (Atlanta) (subsidiary of Global Aviation Holdings Inc.) has reached an agreement with Emirates SkyCargo to operate one Boeing 747-400 freighter on a full-time basis beginning in April 2011. Under the agreement, World will provide scheduled services linking Dubai with Frankfurt and Sao Paulo twice a week, with an additional weekly round-trip flight between Dubai and Frankfurt.