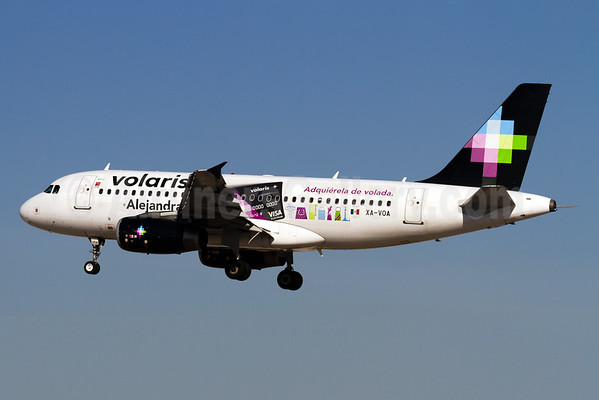 Volaris (Mexico City) has announced new international service between the city of Durango and Chicago’s Midway Airport, starting on December 8 with twice a week flights on Tuesdays and Saturdays.

The new Durango-Chicago (Midway) service, flight schedules, including dates and times of operation, are announced as follows:

Volaris (Mexico City) has announced their expansion into the Costa Rica market with the launch of two new flights from Cancun, Quintana Roo and Guadalajara, Jalisco to Costa Rica’s capital city, San Jose, starting on September 10 with two flights per week.

Volaris is expanding its presence to Costa Rica as part of the carrier’s international growth plans, seeking to increase the country’s connectivity to Mexico’s most important cities as well the US market. Volaris CEO, Enrique Beltranena said: “We are extremely proud to announce flights to Costa Rica, a destination special not only as a natural and adventure tourism location, but also for their history and cultural heritage”.

“Two new services plus our innovative business framework make visiting Costa Rica easier than ever for our Customers in Mexico”, Beltranena added.

Separately, Costa Rica Minister of Tourism, Mauricio Ventura said, “Mexico is Latin America’s top issuing market for tourism by air, which is why Volaris’ bet strengthens the work we’ve done towards attracting more airlines and opening our markets by increasing the number of seats available to the destination and becoming a complement to traditional offerings with an option that provides good service at an affordable price,” the official said. “This also introduces an element of competitiveness in terms of fares to Costa Rica.”

To date, Volaris is the airline with the widest route network servicing Mexico and the US. The carrier has transported nearly 50 million passengers since it started operating in 2006, and this number continues on the rise as a result of more than 240 daily flights operated to 61 leading destinations, including 38 in Mexico and 23 internationally.

For those interested in the new service, flight schedules, including dates and times of operation, are announced as follows:

The carrier is also adding the following routes this winter:

Qatar Airways (Doha) has announced the launch of a new daily all premium Business Class service from its hub in Doha to London’s Heathrow Airport.

The new service will be the first of its kind in the Middle East, commencing from May 15, 2014, with an Airbus A319 aircraft fitted with an all Business Class, single aisle, 2–2 seating configuration offering 40 seats.

Qatar Airways currently operates five daily flights to London Heathrow and the additional sixth all Business Class daily service marks the start of an exciting new era for travelers to and from the UK, who can experience complete comfort and privacy with the airline’s award-winning five-star hospitality.

The new additional flight will step up the frequency on the Doha – London Heathrow route from 35 to 42 weekly services.

Qatar Airways has been awarded the World’s Best Business Class Airline for 2013 and has also twice been the recipient of the Airline of the Year Award in 2011 and 2012 at the prestigious Skytrax Airline Awards. The airline has also been named as ‘Best Long-Haul Airline’ for the second year running and ‘Business Airline of the Year’ at the high profile UK Business Travel Awards 2014 recently held in London.

Qatar Airways’ new A319 Business Class seat will have one of the highest specifications for business class travel of any airline with wide seats that recline into fully flat beds and state of the art Oryx entertainment system (with more than 900 entertainment options  –  movies, television, video games and music).

Passengers can also remain in touch with their friends and loved ones on the ground through the SMS mobile texting GSM and GPRS service upon this aircraft, which is sure to reflect that of a VIP jet experience for those traveling between London and Doha.

Currently undergoing rapid expansion, Qatar Airways is one of the fastest growing airlines operating one of the youngest fleets in the world. Now in its 17th year of operations, Qatar Airways has a modern fleet of 129 aircraft flying to 134 key business and leisure destinations across six continents.

Qatar Airways’ first venture into the all Business Class premium market will strengthen its position as one of the leading airlines in the global aviation industry.

Top Copyright Photo: Andi Hiltl/AirlinersGallery.com. All others by Qatar Airways. Operated as an ACJ, Airbus A319-133 A7-CJA (man 1656) arrives in Zurich.

Volaris (Mexico City) will become a publicly-owned company. The Mexican carrier has issued this statement:

Volaris has announced it has priced its initial public offering comprised of 61,992,540 Series A shares for the Mexican offering and 226,469,000 Ordinary Participation Certificates (CPOs) in the form on American Depositary Shares (ADSs) for the international offering at an initial offering price of Ps.15.51 per Series A share and U.S. $12.00 per ADS. Each ADS represents 10 CPOs and each CPO represents a financial interest in one Series A share of common stock of the Company. Shares are expected to begin trading on the Mexican Stock Exchange (BMV) and the New York Stock Exchange (NYSE), under the symbols “VOLAR” and “VLRS”, respectively.

Deer Air (Beijing) on May 2 changed its name to Capital Airlines (Beijing Capital Airlines). The HNA Group now owns 70 percent of the shares and BTG the other 30 percent.