Previously the carrier announced in August 2017 the addition of 28 Bombardier CRJ900 aircraft, increasing the world’s largest fleet of the 76-seat aircraft to 109.

The airline also plans to draw down its 50-seat CRJ200 fleet by 16 aircraft, to 42 CRJ200s, for a total net gain of 15 aircraft once all aircraft have been inducted at Endeavor.

The three CRJ700s are coming from ExpressJet and will be operated for Delta.

Endeavor Air is a wholly-owned subsidiary of Delta Air Lines.

All photos by Endeavor Air. 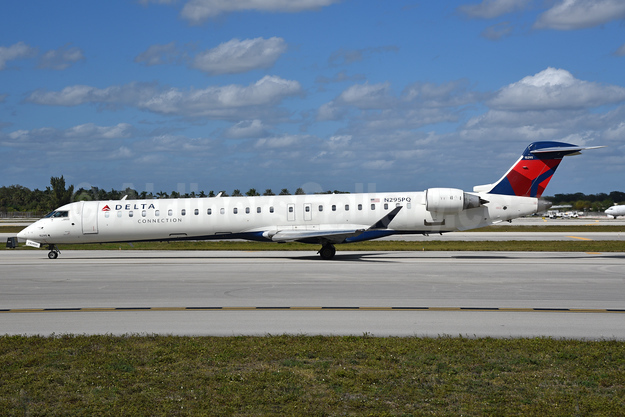 Ryan Gumm, President and CEO, Endeavor Air, announced an opportunity that grows the airline, strengthens its future, and signals another significant commitment from Delta Air Lines.

In a move that shifts 31 aircraft from another Delta Connection partner to Endeavor, the Minneapolis-based regional airline will expand its network and increase its fleet to 154 aircraft by July 2018.

The announcement outlines the addition of 28 Bombardier CRJ900 aircraft, increasing the world’s largest fleet of the 76-seat aircraft to 109; Endeavor will also acquire three Bombardier CRJ700 aircraft. The airline also plans to draw down its 50-seat CRJ200 fleet by 16 aircraft, to 42 CRJ200s, for a total net gain of 15 aircraft once all aircraft have been inducted at Endeavor.

The increase in aircraft also necessitates the need to open a CRJ900 crew base in Atlanta, scheduled for late October.

The shift away from 50-seat flying allows Endeavor to focus on its dual-class operation, while delivering a seamless customer service experience for customers connecting in some of Delta’s most heavily traversed hubs. As part of this announcement, Endeavor also said it plans to close its Minneapolis/St. Paul (MSP) CRJ200 crew base; the airline noted that it will continue to operate a robust CRJ900 base in MSP.

SkyWest Airlines (St. George, Utah) has informed its maintenance employees that it is taking over the Endeavor Air (Delta Connection) (Minneapolis/St. Paul) maintenance base at Fort Wayne, Indiana on February 1, 2015. The company expects to handle up to four overnight Bombardier CRJ200s for the Delta Connection system (see route map below).

Delta Air Lines (Atlanta) will restore Delta Connection service between its Atlanta hub and Ottawa, Canada on December 20, 2014. During the Christmas-New Year holiday period it will operate daily with Bombardier CRJ900 aircraft and then to weekly flights according to Airline Route.

Endeavor Air (formerly Pinnacle Airlines) (Minneapolis) Bombardier CRJ200  (CL-600-2B19) N8758D (msn 7758) operating Delta Connection flight 9E/DL 4100 from Toronto (Pearson) to New York (JFK) was involved in an incident. The aircraft landed at New York (JFK) and slid off an icy taxiway into a snowbank yesterday morning (January 5). As a result the airport was closed for about two hours due to icy conditions until the surfaces could be cleaned. This led to a series of diverted flights. There were no injuries.

Endeavor Air operates 181 regional jets on 1,000 daily flights to more than 100 cities in the United States and Canada.