West Atlantic Cargo Airlines (West Air Europe-Sweden) (West Atlantic Group) (Gothenburg, Sweden) Bombardier (Canadair) CRJ200 (CL-600-2B19) with the registration of SE-DUX (msn 7010) late on January 8 with two pilots was operating flight SWN 294 between Oslo and Tromso, Norway, crashed in the mountainous border region of Norway and Sweden. The crew members declared an emergency and disappeared from radar. The jetliner impacted a mountain northwest of Lake Akkajaure in Lapplandsfjällen near the Norwegian border. There were no survivors.

West Atlantic was founded in 1962 and is headquartered in Gothenburg, Sweden. Operations are performed all over Europe.

The aircraft departed Oslo on route to Tromsö and declared mayday at 23:31 (January 8) whereby the Swedish and Norwegian search and rescue teams were notified. The crash site was located at 03:10 (January 9) near the Norwegian border by the Lake Akkajaure in the Swedish Lapplandsfjällen by air rescue services with support from Hovedredningssentralen in Norway.

The search has been taken over by the Swedish police which are on their way to the accident site. The internal process is coordinated by the Company’s Emergency Response Team.

West Atlantic Sweden AB has operated the aircraft since 2007 and flown approximately 10,000 hours. 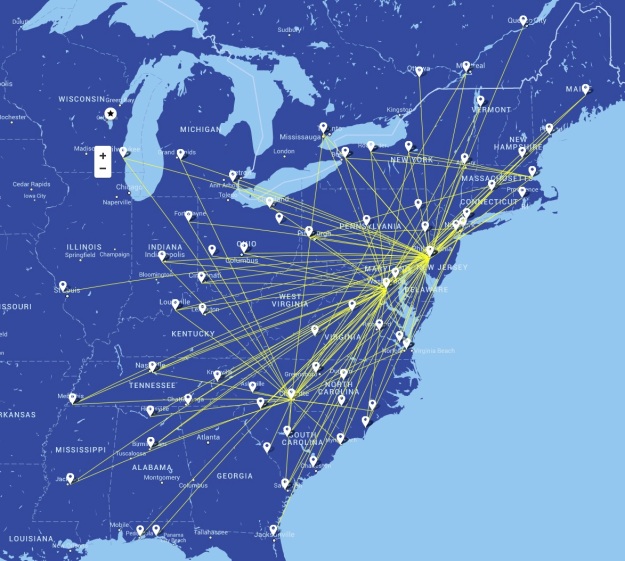 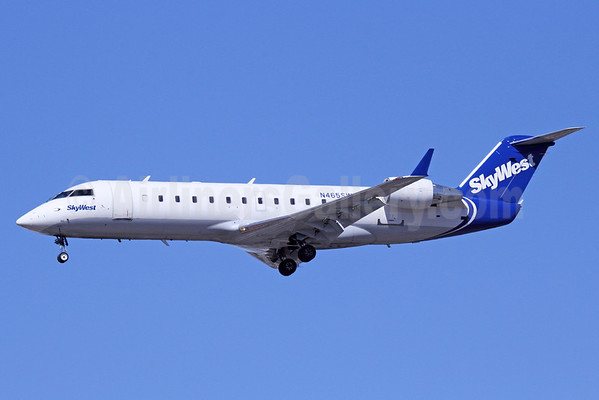 SkyWest Airlines‘ (St. George, Utah) pilots last week accepted a three-year pay agreement, securing top compensation and work rules in the regional industry. The agreement, for which the strong majority of pilots voted in favor, is effective immediately and runs through mid-2018.

“SkyWest pilots are top of our industry, and this agreement reflects that position,” said Mike Thompson, SkyWest Airlines Chief Operating Officer. “This vote reaffirms SkyWest’s position as an industry leader and ensures we are best positioned for future opportunity. We look forward to continuing to work with our pilots and all SkyWest people to further advance SkyWest’s position as the airline and employer of choice.”

The new agreement provides salary increases for all pilots, a substantial increase to first-year pay, guaranteed profit sharing and an increased 401(k) match, as well as a number of enhancements to work rules. The previous agreement became amendable in January 2015.

Copyright Photo: Michael B. Ing/AirlinersGallery.com. SkyWest is rapidly reducing the amount of 50-seat regional jets as the report states above. Its largest Bombardier CRJ200 customer is United Airlines but that too will continue to be reduced. Bombardier CRJ200 (CL-600-2B19) N956SW (msn 7871) in United Express colors departs from Los Angeles International Airport.

SkyWest Route Map: (click on the map for the full size view):

ExpressJet Route Map (click on the map for the full size view): 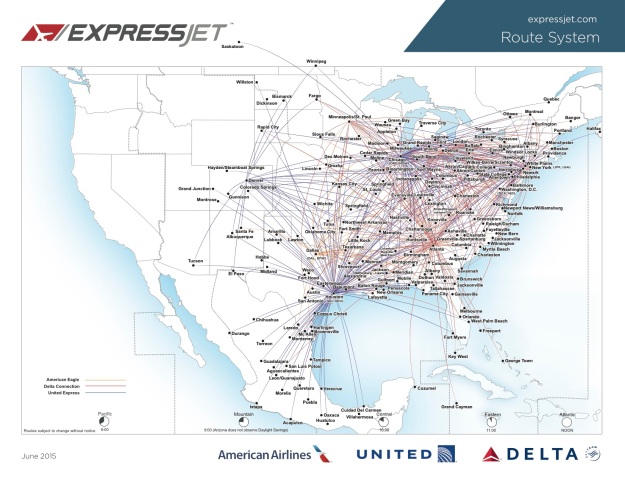 American Airlines (Dallas/Fort Worth) is planning to end American Eagle service from Los Angeles to both Monterey, California and Santa Fe, New Mexico on September 8 per Airline Route. AA is planning to end all service to both stations.

Air Wisconsin (American Eagle) (Appleton) flight ZW/AA 4010 from Charlotte to Richmond on Saturday (April 25) with Bombardier CRJ200 (CL-600-2B19) N430AW (msn 7719) was evacuated after landing at Richmond. The 42 passengers and three crew members safely evacuated the regional jet on the taxiway after a lithium battery from one of the passengers sent smoke through the cabin according to NBC Channel 12. The flight attendant used the fire extinguisher to douse out the fire in the hand luggage according to the report.

Each of the new jet flights from Salt Lake City to West Yellowstone will be onboard the 50-seat Canadair Regional Jet (Bombardier) CRJ200 regional jets. There will be two daily flights Thursday through Monday and one daily flight on Tuesday and Wednesday.

SkyWest Airlines has provided scheduled passenger service to the West Yellowstone community since 1986.

Ak Bars Aero (formerly Bugulma Air Enterprise) (Bugulma, Russia) is getting out of the scheduled airline business. The last scheduled flight will be operated on January 13 per Airline Route. The airline mostly operates Bombardier CRJ200 regional jets on the scheduled routes.

The last routes to be operated:

The company was established on July 10, 1953 as Bugulminskoe Aviapredpriyatie. That year operations began between Bugulma and Kazan. The airline was formerly part of Tatarstan Airlines.