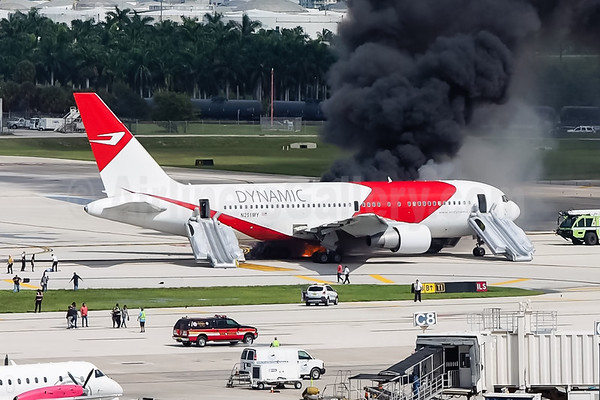 British Airways (London) flight BA 2276 from Las Vegas (LAS) to London (Gatwick) (LGW) with 157 passengers and 13 crew members on board and operated with Boeing 777-236 ER G-VIIO (msn 29320) aborted its takeoff at LAS at 4:13 p.m. local time (September 8) when the left engine caught on fire. The passengers and crew members evacuated the aircraft on the runway.

The incident closed runway 7L at McCarran International Airport until 0001 am this morning.

The media is now reporting 20 people were injured.

We are continuing to care for the 157 customers who were involved in the incident with flight BA2276 from Las Vegas to London Gatwick on Tuesday 8 September 2015.

All customers have been provided with hotel accommodation, and our colleagues are helping them with anything further they require.

Customers who were taken to hospital have all been released following care and treatment. The National Transportation Safety Board in the US is conducting an investigation into the incident and we will give them our fullest support.

The safety of our customers and crew are always our top priorities, and all of our other flights are continuing to operate as normal.

If friends or family of customers who were on board BA2276 have any concerns they can contact British Airways on the following numbers:

The National Transportation Safety Board (NTSB) today issued this short statement on Twitter:

NTSB (is) sending (a) team of three investigators to British Airways 777 engine fire that occurred in Las Vegas yesterday.

Copyright Photo Below: Terry Wade/AirlinersGallery.com. G-VIIO returns to the LGW base prior to the accident.

United Airlines (Chicago) flight 201 from Honolulu to Guam with 335 passengers and 13 crew members was diverted on July 10 to Midway Island because of a “mechanical issue” according to Channel 10. The Boeing 777-200 (N210UA) landed safely after the declared emergency. A replacement aircraft brought the passengers back to Honolulu on Friday morning.

According to eTurbo News, “A smoke-filled cabin, malfunctioning controls, and a loss of power forced the crew to declare an emergency, and they were able to safely land the widebody aircraft on the former military Midway Island airport at night.”

Midway Island was site of the important battle during World War II.

In other news, United is reducing service to Caracas from Houston on September 15 following the actions of American and Delta as previously reported. United will reduce its daily service on the route to four flights a week. The U.S. carriers are reducing service to Venezuela as a result of the Venezuelan government strict rules of removing from the country ticket sales and denying the conversion from Bolivars to Dollars.

In further news, United is adding two routes from Guam on October 27 to both Seoul (Incheon) and Shanghai (Pudong) per Airline Route.

Air Accidents Investigation Branch (AAIB) has classified the Ethiopian Airlines Boeing 787-8 ET-AOP (msn 34744) fire at London Heathrow Airport on Friday (July 12) as a “serious incident”. The important statement in the message below is the statement at the end is the heat damage in upper rear fuselage “is remote from the area in which the aircraft main and APU (Auxiliary Power Unit) batteries are located, and, at this stage, there is no evidence of a direct causal relationship”.

Fixing ET-AOP could be a challenge for Boeing: CLICK HERE

The AAIB issued this statement:

Ethiopian Airlines‘ (Addis Ababa) Boeing 787-8 ET-AOP (msn 34744) parked at a remote stand (parking spot) at London (Heathrow) was involved in an unspecified on-board fire this afternoon. No passengers were on board the aircraft.

The 787 was grounded in January after several on-board fires involving the battery system. The NTSB was never able to determine the cause of the battery fires. Boeing re-designed a battery containment package system that was approved and certified by the Federal Aviation Administration (FAA) and the aircraft returned to the skies in April. It is undetermined if this reported fire involves the battery system.

Airport operations at LHR was suspended briefly due to the fire. Fire equipment were seen surrounding the aircraft at the stand. Fire crews were inspecting the rear cargo compartment (see second video).

According to a Reuters photo, there appears to be a damaged area in the top rear roof area ahead of the tail.

Today, Friday, July 12, 2013, smoke was detected from Ethiopian Airlines Boeing 787 aircraft with the registration number ET-AOP, which was parked at London Heathrow Airport for more than eight hours.

The aircraft was empty when the incident was observed.

The cause of the incident is under investigation by all concerned.

Further statements will be issued in due course, as we receive more information.

The aircraft has been moved to a hangar and an investigation has started. All airlines continue to operate the aircraft although a Thomson Airways 787 had to return due to a technical problem. Read the full report from the Financial Times: CLICK HERE

Japan Airlines-JAL‘s (Tokyo) flight JL 8 with a Boeing 787-8 Dreamliner (JA829J) arrived from Tokyo (Narita) at Boston (Logan) this morning at 10 a.m. (1000). The 173 arriving passengers and 11 crew members had just disembarked according to this report by the Boston Globe. The cleaners who boarded the aircraft reported smelling smoke and a fire was discovered in the lower level battery compartment. The airport ARFF units put out the fire out before it could spread.

Boeing has been investigating electrical issues on other 787 Dreamliners and has issued the following statement:

Regarding Monday’s event onboard a Japan Airlines (JAL) 787 at Boston Logan Airport, we are working closely with the National Transportation Safety Board (NTSB), our customer and other government agencies. JAL has reported that smoke detected while a 787 was on the ground after passengers disembarked and during cleaning was traced to the battery used to start the auxiliary power unit (APU).

As is standard practice within the industry, it would be premature to discuss additional details at this stage as the investigation is ongoing. However, nothing that we’ve seen in this case indicates a relationship to any previous 787 power system events, which involved power panel faults elsewhere in the aft electrical equipment bay. Information about the prior events has been shared with the NTSB and they are aware of the details.

Boeing is cooperating with the NTSB in the investigation of this incident. Before providing more detail, we will give our technical teams the time they need to do a thorough job and ensure we are dealing with facts, not speculation.