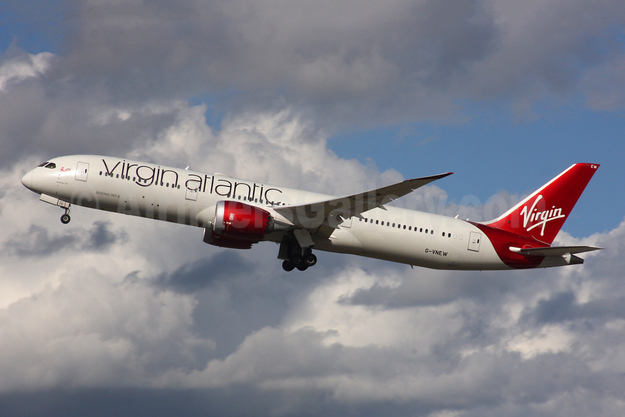 The airlines’ expanded joint venture will become the preferred choice for customers travelling across the Atlantic offering the most comprehensive route network, convenient flight schedules, competitive fares and reciprocal frequent flyer benefits, including the ability to earn and redeem miles across all carriers. Customers will also benefit from the co-location of facilities at key hub airports to improve connectivity and access to each carrier’s airport lounges for premium passengers.

The signed agreements are all subject to regulatory approvals.

Flights VS 41 LHR-SFO and VS 42 SFO-LHR will operate with the new Boeing 787-9 Dreamliner.

In other news, the airline has announced a trial with Sony Mobile Communications to test how new wearable technology can help improve the airline’s maintenance and engineering processes. The airline issued this statement:

Engineers working on Virgin Atlantic aircraft at the airport and in the hangar will be testing the use of Sony’s SmartEyeglass Developer Edition SED-E1, tablet, mobile phone and SmartWatch 3 (above) in an eight-week trial, starting next week. The trial will take place at London Heathrow and will test how the technology can be used for real time communication between the engineering team on the aircraft and in the engineering support areas.

Using Sony’s SmartWear alongside a smart phone or tablet will remove paper from some engineering processes and reduce the journey times between an aircraft and technical control. This will enable the engineers and technicians to remain on the aircraft during turnarounds – helping to save valuable time, as well as make a significant contribution to Virgin Atlantic’s targets to reduce paper waste.

Phil Maher, Director of Operations at Virgin Atlantic, said: “We’re delighted to be partnering with Sony to trial wearable technology within our engineering team.

Engineers will be able to use SmartEyeglass Developer Edition SED-E1 to take pictures or video of the tasks they are working on. This will be linked to an app running on a smartphone which will allow the engineers to efficiently complete and submit a form requesting further technical assistance. SmartEyeglass Developer Edition SED-E1 will also be used for real-time video streaming to allow office-based engineering staff to see a problem from the engineers’ point of view in order to provide more rapid technical assistance.

Virgin Atlantic Airways (London) and Boeing (Chicago and Seattle) celebrated the delivery of the airline’s first 787-9 Dreamliner yesterday (October 9). The airline is the first European airline to take delivery of the 787-9 and plans to operate the airplane initially on its London Heathrow to Boston route.

Virgin Atlantic’s first 787-9 touched down at London’s Gatwick Airport today (October 10) following a more than 7,400 kilometer (4,000 nautical mile) nonstop flight from Paine Field in Everett, Washington. The 787-9 registered as G-VNEW (msn 40956) (above), is named ‘Birthday Girl’ in reference to the UK carrier’s 30th anniversary and is the first of 16 787-9s Virgin Atlantic has ordered from Boeing.

The 787-9 complements and extends the 787 family. With the fuselage stretched by 20 feet (6 meters) over the 787-8, the 787-9 will fly up to 40 more passengers an additional 830 kilometers (450 nautical miles) with the same exceptional environmental performance – 20 percent less fuel use and 20 percent fewer emissions than the airplanes they replace.

Based out of London’s Gatwick and Heathrow Airports, as well as Manchester and Glasgow Airports, Virgin Atlantic Airways operates a fleet of approximately 40 airplanes. Along with its first 787-9, the British operator also has a Boeing fleet of 12 Boeing 747-400s operating on routes across North America, the Caribbean, Africa and Asia.

To date, nearly 60 customers from around the world have ordered more than 1,000 Dreamliners, approximately 40 percent of which are 787-9s.

In October, we’re welcoming ‘Birthday Girl’ – the new Boeing 787-9 aircraft that will lead our 16-strong Dreamliner fleet – which might just go down in history as the planes that revolutionized our business. And while we’re bursting with excitement about it, we’ve been working up to this moment for several years. Someone who has been helping keep the project running smoothly from the very beginning is Hayley Burton, a Program Planner and self-confessed airline geek.

Hayley wasn’t always an airline geek though. In fact, she started as a Business/Data Analyst and joined Virgin Atlantic three and a half years ago, supporting projects in Engineering. “I’ve always been interested in many different things. Following my school education, I started my work life as a legal secretary and ended up forging a career within Information Management & Technology for the NHS. I then completed a HND in Computing & Software Development as formal qualification of my skills and knowledge within this area.”

Although Hayley didn’t forecast a career in aviation, when she saw the role within Virgin Atlantic, she couldn’t resist applying. “I saw the ad and my best friend, who works at Virgin Atlantic, said I’d really fit in here – so that was it really!” And even though she wasn’t a specialist or industry expert, her transferable skills and drive to tackle big challenges head-on, meant she saw the potential for her skills to contribute to our business, but also the chance to learn something new too.

“Moving onto the 787 program was a real opportunity for me to understand the other elements of the business and where and how they all worked together. When I was working in Engineering, that was the only area I learned about. Now, I’m fortunate enough to be able to look at lots of elements with multiple areas – from Flight Operations to Cabin Crew and Service Delivery. It’s really enabled me to see the airline as a whole.”

It’s true. As Program Planner, Hayley really does have a finger in almost every pie. “I oversee the entire project planning within the programme. I create a very high-level plan and track all of our business areas within it. So it’s really about understanding what people have to deliver and when, their required outcomes, identifying any potential risks and how they’re managed – including financials. I’m also part of the 787 comms team, so I’m regularly in touch with internal and external stakeholders, and I’m also a bit of a right-hand-man for my Program Manager. I liaise with my Boeing counter-part who I collaborate with on a regular basis in order to review the plans and share information on our progress.”

Hayley says the moment Boeing toured the UK with the 787 and she got to see it upfront, was when she realized what a great project this was. “This fleet is so important to our business; it’s a real game-changer. Not only will the fuel efficiency save us money, but the aircraft are e-enabled, meaning they use state-of-the-art technology.”

“From a technology perspective we’ve installed and built a new IT infrastructure in order to process the waves of data that we’re going to receive from the aircraft and that’s really exciting. It’ll be used to work out how we fly, what routes we take, how we maintain the aircraft and how we can improve all those things”.

It’s been a challenging project but one that she says has been exciting and well-executed. “We’ve definitely rolled our sleeves up and thrown ourselves at this. Boeing has told us that we out-weigh other operators in being prepared for this aircraft. And as the arrival of the first aircraft draws ever closer, we’ve set up a countdown clock – you can feel the excitement. We have a fantastic programme team and everyone has really pulled together.”

While she’s impressed with the team and how our areas work together, she’s says the highlight so far has been her visit to Boeing’s Everett hangar in Seattle – the world’s largest building by volume.

“We travelled around the hangar in golf carts and there were people just everywhere constructing these four airplanes on the 787 production line – they were literally being built before my eyes. It was just amazing. I really got to see something that people – even in the industry – don’t usually get to see.”

So apart from once-in-a-lifetime experiences, what’s the best part of working on this project? “Everything surprises me about this job. I’ve learned so much through my work on this program, it’s unbelievable. My knowledge about how the airline industry works is immense and I’m still trying to cram it into my brain!”

“My goal is to manage a major program like this in the future; the skills and experiences I’ve built upon by working at Virgin Atlantic makes me feel optimistic about my future career.”

Update: On October 23, 2014 the new type entered revenue service on the London (Heathrow)-Atlanta route. The airline issued this statement:

Guests on board include BRIT Award-winning 4-piece Rudimental and hit-makers Gorgon City (below). The two London based bands will perform the first ever gig to be live streamed from over the Atlantic Ocean to the world and a plane packed full of VIP guests and an exclusive audience of super fans who won spaces on the flight.

Also on board is TV chef Lorraine Pascale. Best known for her hit TV series and recipe books, Lorraine has been working with the team at the airline to create signature dishes for Virgin Atlantic’s Upper Class passengers along with a variety of children’s meals to be served throughout every cabin.

Lorraine’s new menu will be officially launched on services leaving the UK from 28th October but as a special one-off all guests on board the celebration flight to Atlanta will have the chance to experience her new dishes in every cabin.

To accompany Lorraine’s amazing food and making a special appearance on board for the first time is Virgin Atlantic’s new sparkling wine from English winery Hambledon Vineyard. Proudly grown and produced in Hampshire, Meon Hill Grand Reserve has been specifically selected to compliment the cabin pressure and humidity of the 787 cabin and has been found to stay bubbly for longer. The new sparkling wine will be launched on Birthday Girl and will be available exclusively on the 787 aircraft.

Birthday Girl will start her first commercial flight on October 28 to Boston and other Dreamliners will be deployed on other key London to US East Coast market initially, with subsequent services between Heathrow and Washington, Heathrow and Newark and Heathrow and New York JFK scheduled to start in the following five months.

Video of the live performance:

Video: The building of the first Virgin Atlantic Boeing 787-9: