TUI fly Belgium (TUI Airlines Belgium) has announced it will be offering two new seasonal destinations in the Balkans in its 2020 summer schedule: Ohrid (North Macedonia) and Pula, Istria (Croatia).

Pula will be served twice-weekly from Brussels from April 25 to October 2, 2020.

TUI fly is a brand name of TUI Airlines Belgium nv. TUI fly is a part of TUI Group, the largest tourism group in the world, with its headquarters in Hannover, Germany.

To make optimal use of its fleet during the less busy winter season in Europe, TUI fly Belgium is operating charter flights from Canada and the United States. A total of eight Belgian registered aircraft (and Belgian crews) are flying tourists to and from exotic – and warmer – destinations.

The holiday airline is operating for Apple Leisure Group (ALG), a vertically-integrated travel and hospitality conglomerate focused on packaged travel and resort/brand management in Mexico and the Caribbean. And for two charter airlines: Sunwing Airlines and Miami Air, the latter, however, without Belgian crew.

Five different bases in Canada and the United States

Milwaukee Airport is the biggest overseas base with three aircraft, two aircraft are allocated to Ottawa Airport and one aircraft at the airports of Lansing, Chicago Rockford and Miami.

A wide range of destinations (*)

(*) this list might not be complete, but it shows TUI fly Belgium’s extensive network in the United States and Canada.

The airline has a network of 180 routes and flies to more than 100 airports. TUI fly is the second largest Belgian airline company.

TUI fly was founded at the end of 2003 and started operations in March 2004 with 5 aircraft.

The airline now has 17 aircraft: 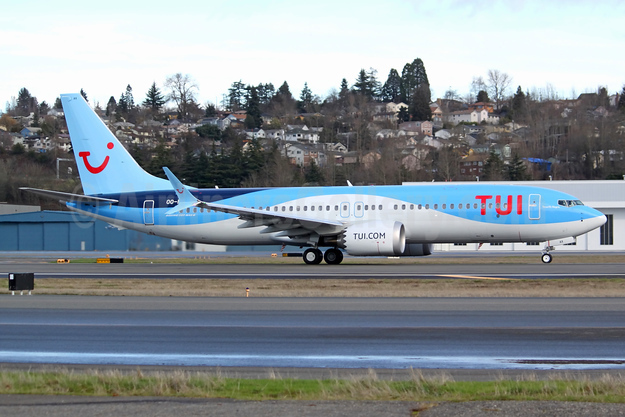 TUI Group, the world’s largest tourism business, is celebrating the delivery of the operator’s first Boeing 737-8 MAX 8 (OO-MAX). TUI Airlines (Belgium) is the TUI Group operator of the new type.

The 737 MAX delivers the highest efficiency, reliability and passenger comfort in the single-aisle market by incorporating the latest technology CFM International LEAP-1B engines, Advanced Technology winglets, the Boeing Sky Interior, large flight deck displays, and other improvements. The efficiency gains have helped make the MAX the fastest selling airplane in Boeing history with more than 4,300 orders to date from 92 customers worldwide.

TUI Group has 51 additional orders of the 737 MAX 8 and four 787 Dreamliners. The Group also has 18 unfilled orders for the 737 MAX 10 and was the first European operator to select the latest and largest member of the 737 MAX family of airplanes.

The pictured OO-MAX was officially handed over on January 29, 2018. OO-MAX went into revenue service on February 5, 2018 between Brussels and Tenerife Sur (TFS).

The first has emerged from the paint shop and is pictured at Boeing Field in Seattle.

We selected our 6 favorite entries for the 3 new Boeing 737 MAX.

✈ Vote for the 3 new names through 3 polls on our Instagram stories! @tuiflybelgium → https://www.instagram.com/tuiflybelgium/

SmartLynx has issued this statement:

The aircraft seating configuration is 180 Y all economy, MTOW 77 tons.

All aircraft will operate from the base in Brussels, Belgium.

This is a continuation of a successful collaboration initiated between these two airlines in 2016.

At the beginning of 2017, SmartLynx wet leased two aircraft Airbus A320 to TUI Airlines Belgium. 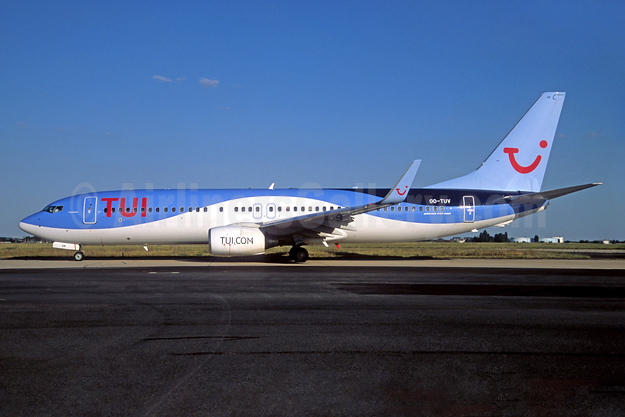 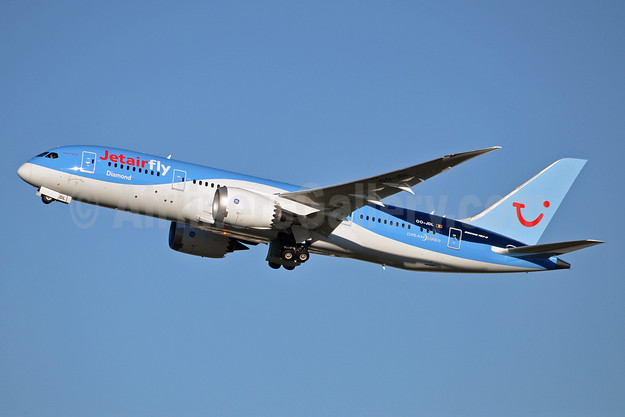 Jetairfly (TUI Airlines Belgium) (Brussels) will return to Sanford (near Orlando) on October 24 where it will operate twice weekly Boeing 767-300 ER flights on a Brussels-Miami-Sanford-Brussels routing per Airline Route.

The carrier will also add a separate third weekly return trip to Miami.

Jetairfly (TUI Airlines Belgium) (Brussels) and Boeing on December 3 celebrated the delivery of the airline’s first Boeing 787-8 (OO-JDL, msn 34425) named “Diamond” (above). The airplane departed Paine Field in Everett on Tuesday on its delivery flight to Brussels.

The 787 is scheduled to begin flying short and medium haul Jetairfly routes in early December and long haul routes between Christmas and the New Year.

Jetairfly is part of the TUI Travel PLC, the largest tourism group in the world.

Jetairfly (TUI Airlines Belgium) (Brussels) has dropped its all-blue with smiling TUI brand on its Boeing 767-341 ER OO-TUC (msn 24844) and the other 767-300 for a more subdued generic brand with very small titles by the nose. Competitor Thomas Cook Belgium bought a lot of seats on TUI’s charter flights for the winter season and probably did not want their booked passengers getting on a competitor’s emblazoned aircraft.