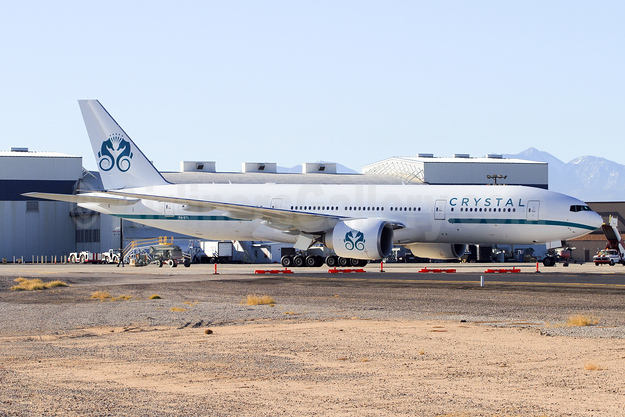 Crystal Luxury Air (subsidiary of Crystal Cruises) (Los Angeles) has taken delivery of its first Boeing 777. The company will begin offering exclusive 14-day and 28-day itineraries to remote destinations around the world. The pictured ex-Air Austral Boeing 777-29M LR has been painted at Victorville, CA and is now registered as P4-XTL.

As we reported last month: Crystal Cruises for Crystal Luxury Air (Los Angeles) made this announcement:

Crystal Cruises, the world’s most awarded luxury cruise line, is once again pioneering new fronts in the luxury travel industry with the purchase of a Boeing 777-200 LR, offering an array of global itineraries for its expanded brand extension Crystal Luxury Air. The announcement comes on the heels of Crystal’s groundbreaking news in July of an extensive brand expansion, which will include extravagant air vacations around the world aboard a luxurious Boeing 787-8 Dreamliner.

In addition to doubling the initial air projections with the expanded aircraft fleet, Crystal will work with the Registry of Aruba in developing and securing an Air Operator’s Certificate (AOC). This will pave the way for Crystal Luxury Air to launch international operations. The twin-aisle Boeing 777-200 LR will be redesigned to accommodate just 88 guests with flat-bed first class seats; a beautifully appointed lounge and bar; and offer 14- and 28-day around-the-world and international itineraries, beginning in 2017.

The twin-aisle Boeing 777-200 LR, and the Boeing 787-8 Dreamliner, which typically seats up to 300 passengers and will be redesigned to accommodate just 52 guests, will boast the premium luxury that discerning global travelers have come to expect from Crystal, including copious amounts of guest space, plush amenities and Crystal’s world-class service and crew. Trips will include accommodations at the world’s most luxurious hotels, the finest Michelin star-level cuisine prepared by celebrated chefs and fabulous local cultural entertainment. Additionally, the aircrafts can be arranged for special charters.

Boeing (Chicago, Seattle and Charleston) and CFM International announced yesterday (May 7) that they successfully initiated flight testing of the LEAP-1B* engine on April 29 on a modified ex-Pan Am Boeing 747-100 (see below) flying testbed at GE Aviation Flight Test Operations in Victorville, California.

According to Boeing, “The testing is the next major milestone in a two-year program that will culminate in engine certification in 2016 and delivery of the first Boeing 737 MAX in 2017. The engine performed well and completed multiple aeromechanical test points at various altitudes during the five hour, 30 minute first flight.”

The LEAP-1B engine (above) is the exclusive powerplant for the Boeing 737 MAX family and is part of the most extensive ground and flight test certification program in CFM’s history. The first LEAP-1B engine began ground testing on June 13, 2014, three days ahead of the schedule set when the program was launched in 2011.

Over the next several weeks, the flight test program will encompass a comprehensive test schedule that will gauge engine operability, stall margin, performance, emissions and acoustics. It also will further validate the advanced technologies incorporated in the engine, including the woven carbon fiber composite fan, the Twin-Annular, Pre-Mixing Swirler (TAPS) combustor, ceramic matrix composite shrouds in the high-pressure turbine and titanium aluminide blades in the low-pressure turbine.

* The LEAP-1B is a product of CFM International, a 50/50 joint company between Snecma (Safran) and GE.

Video: From CFM International: Who do jet engines work?

Bottom photo: Boeing. The test airframe is the pictured GE Aircraft Engines Boeing 747-121 N747GE (msn 19651) seen departing from Victorville with the test engine. The historic Jumbo was originally delivered to Pan Am as N744PA on June 21, 1972.

British Airways (London) is taking each of its eight Boeing 787-8 Dreamliners out of service one at a time for routine warranty service work by Boeing at Victorville, California. Starting with the pictured Boeing 787-8 G-ZBJA (msn 38609), each aircraft from the first four deliveries (JA-JD), is expected to take around 10 days for the service work. The last four 787s to be delivered (JE-JH) are expected to take less time since they are closer to the new 787s being delivered. Each of the eight aircraft, when finished, will be the same as new production 787s currently being delivered. This is normal procedure for a new aircraft type as the manufacturer often makes some changes as aircraft roll off the production line.