United Airlines has officially welcomed a one-of-a-kind, California-themed aircraft livery to its fleet – a Boeing 757-200 (N14106) created by a San Francisco resident as part of the airline’s national Her Art Here competition. Designed by artist Tsungwei Moo, the eye-catching plane is a tribute to the Golden State where United operates two major hubs – one in Los Angeles and the other in San Francisco – and features quintessential Californiaimagery including sunglasses, palm trees and the Golden Gate Bridge. Launched in February, United’s Her Art Here contest gave female artists like Tsungwei the chance to use an airplane as their canvas, inspiring women around the world who may be interested in careers in the arts. A labor of passion, Tsungwei’s creation was also shaped by her personal journey. The talented artist grew up in Taipei, Taiwan before emigrating to San Francisco 14 years ago aboard a United Airlines flight.

“It’s truly a dream come true. The vibrant colors, sunshine and subject matter make it California. I could never imagine one day my art will be displayed on a United Airlines plane which brought me to the United States. There are no culture borders in art and it doesn’t matter my status is an emigrant female artist. This plane has its mission now, to bring more joy into people’s life, connecting people and uniting the world through experience art,” noted Ms. Moo. Before taking to the skies, United’s Her Art Here California plane spent time in Amarillo, Texas where it took 17 days for painters to transform the Boeing 757-200 into Tsungwei’s winning design.

According to the company;

“The BizAir Shuttle’s management team has analyzed US Department of Transportation (DOT) data to identify markets with high airline traffic and to serve those markets with public jet charter flights between Carlsbad, California and Los Angeles, California.”

The company will use the pictured Embraer EMB-135LR (ERJ 135LR).

All images by BizAir Shuttle. 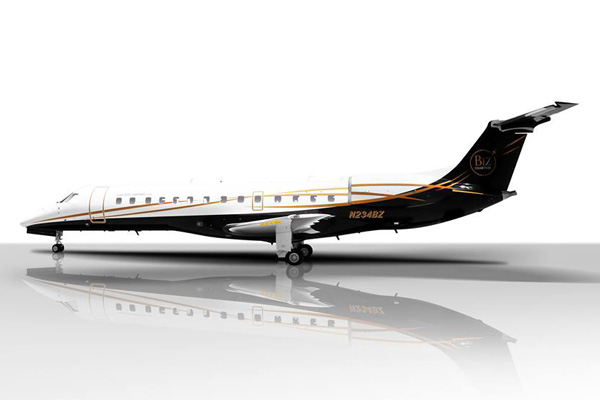 American Airlines (Dallas/Fort Worth) is further expanding its American Eagle Embraer 175 operations, routes and schedules from its Los Angeles, Chicago (O’Hare), Miami and New York (JFK) hubs per Airline Route. The new routes will be operated by its various partner airlines.

From Chicago (O’Hare), starting on March 29, E175 service will be initiated to Madison and Richmond. This will be expanded on May 7 with new E175 service to Austin and on June 4 to Memphis.

From Miami, starting on May 7, E175 service will be offered from the MIA hub to various domestic and Caribbean routes by Republic Airlines (2nd) (Indianapolis), replacing Embraer ERJ 145 flights operated by Envoy Air (Dallas/Fort Worth). On May 7, the new type will be operated to Charleston, South Carolina, Norfolk and North Eleuthera. Starting on June 4, the E175 will be assigned to the Fort-de-France, Greensboro, La Romana, Marsh Harbour, Memphis and Port-au-Prince routes. Finally on August 19, the E175 will be operated to Providenciales (Provo) in the Turks and Caicos Islands.

From New York (JFK), new Embraer E175 aircraft will be assigned to the Norfolk route starting on May 7 followed by Indianapolis route on June 4.

Alaska Airlines (Seattle/Tacoma) flight AS 336 bound from Seattle-Tacoma International Airport (SEA) to San Jose, California (SJC) with 112 and five crew members returned to SEA late last night (April 9) due to bird strike according to The Associated Press and The Seattle Times. According to an airline representative the flight returned to SEA out of abundance of precaution.

Los Cabos will commence on October 8 and Puerto Vallarta the following day.

The flights will be operated with Boeing 737s on the following schedule:

British Airways (London) is taking each of its eight Boeing 787-8 Dreamliners out of service one at a time for routine warranty service work by Boeing at Victorville, California. Starting with the pictured Boeing 787-8 G-ZBJA (msn 38609), each aircraft from the first four deliveries (JA-JD), is expected to take around 10 days for the service work. The last four 787s to be delivered (JE-JH) are expected to take less time since they are closer to the new 787s being delivered. Each of the eight aircraft, when finished, will be the same as new production 787s currently being delivered. This is normal procedure for a new aircraft type as the manufacturer often makes some changes as aircraft roll off the production line.

SkyWest Airlines (United Express) (St. George, UT) will drop Chico, California and the Chico-San Francisco route on December 2. The route is not profitable according to KRCR News. This will end commercial air service at the airport.

Horizon Air’s nonstop flight from Las Vegas to Mammoth Lakes will operate on Mondays and Thursdays between January 15 and April 6, 2015.

Horizon Air will operate the flights with the Bombardier DHC-8-402 (marketed as the Q400) turboprop aircraft on the new route.