ETF Airways (Dubrovnik) is a new airline in Croatia.

The aircraft has now been painted in Shannon, Ireland.

ETF will specialize in charter flights as well as ACMI and wet lease services.

Chrono Aviation made this announcement on April 21, 2021:

This is a great day for Groupe Chrono Aviation. While it continues to experience spectacular growth despite the pandemic, it has announced the acquisition of the largest aircraft in its history, a Boeing 737-800 (737-8Q8, C-FMBO, msn 30631). The new generation aircraft, formerly owned by Air Transat, will be the first of its kind in Quebec to be offered exclusively on charter. This announcement implies the addition of 20 new employees within the company.

With a capacity of 189 passengers, an overall length of 39.5 meters or 129 feet and 6 inches, or more than half an American soccer field, the addition of this state-of-the-art aircraft marks a milestone in the company’s history.

In the coming months, the Chrono team will be working hard to get the aircraft back into service and the Transat stars will soon be replaced by matte black. The addition of this first 737-800 will create about 20 new jobs in the company and confirms, without a doubt, Chrono Aviation’s position as a Quebec leader in the air charter industry.

Groupe Chrono will soon announce the first destinations of the aircraft.

Groupe Chrono has a fleet of 14 aircraft, including 3 Boeing. Based at Quebec City and Saint-Hubert airports, where the company also operates LUX, the largest FBO in Montreal, Chrono employs 280 people. Founded in 2012, it is the Quebec company with the most diversified fleet. 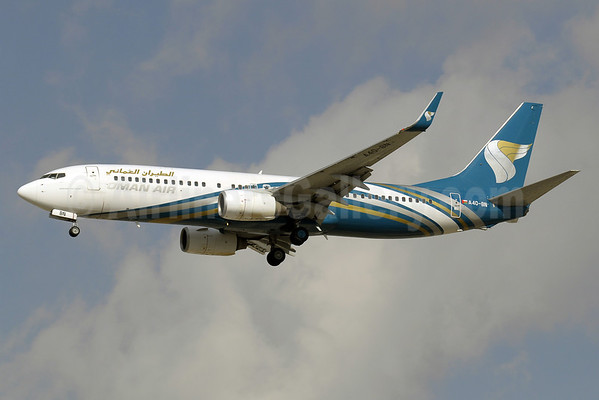 Oman Air’s Chief Financial Officer, Japeen Shah, said, “We are very pleased to sign these agreements with Air Lease Corporation. They enable Oman Air to continue its ambitious fleet and network expansion program, and deliver even greater choice and convenience for our customers. Our expansion plan will see Oman Air’s fleet expand to 57 aircraft by 2018, and to 70 aircraft by 2020. This agreement represents a significant step towards achieving our strategic aims. Furthermore, Air Lease Corporation is at the forefront of the aircraft leasing industry and shares Oman Air’s commitment to realising excellence in all aspects of its work. We look forward to a fruitful partnership.”

Oman Air’s increased fleet size is enabling it to offer even more exciting destinations within its global network. Over recent months, new services have been launched to Manila, Jakarta, Goa and Singapore. Further new services will be announced closer to the time of their launch, and are expected to include, amongst others, destinations in Bangladesh and China.

In other news, the airline announced a new scheduled route from Krabi International Airport to Nanchang, China. The new route was started on July 15. Previously New Gen operated charters on this route.

Copyright Photo: Ivan K. Nishimura/AirlinersGallery.com (all others by New Gen Airways). N645AR is seen on the ramp at Honolulu. The new airliner is named “Juthathib”.

Sun Country Airlines (Minneapolis/St. Paul) could be facing a strike by its pilots represented by the Air Line Pilots Association (ALPA). The pilots of the airline yesterday (April 24) picketed for higher wages outside of the Minneapolis-St. Paul International Airport. ALPA states they are the lowest Boeing 737 scheduled airline pilots in the country. The pilots have authorized a strike if necessary.

The union issued this statement:

“Our current pay is 30 percent below the midpoint for our peers. We’re seeking a contract that gradually gets us closer to the industry average. The company offer keeps us from realizing that goal throughout the life of a new contract,” said Capt. Brian Roseen, chairman of Sun Country’s ALPA Master Executive Council.

Virtually all of Sun Country’s 247 active ALPA pilots not flying or in training marched in shifts outside MSP’s Terminal 2, joined by supporters from United, Delta, FedEx Express, Compass, Endeavor Air, and other ALPA pilot groups.

ALPA and Sun Country have been in negotiations for five years, and in federal mediation since 2012. In February pilots voted 100 percent to authorize ALPA to declare a legal strike if later allowed to do so by the federal government. Before any strike could occur, the National Mediation Board would have to release the pilot group from mediation and the group would have to complete a 30-day cooling off period.

“Under our new ownership Sun Country has been profitable and more than doubled in size. It’s time for them to invest in people the same way they’ve invested in airplanes and facilities,” Roseen said. “We want to negotiate. We’re 100 percent ready to do everything the law allows to lift ourselves up from the bottom of the industry.”

Meanwhile the pilots of Southwest Airlines (Dallas) came to the aid of its fellow pilots at Sun Country. SWAPA issued this statement:

As the pilots of Sun Country (SCA) picket on Friday outside of Minneapolis-St. Paul International Airport, the Southwest Airlines Pilots’ Association (SWAPA) announces support of the SCA pilots’ efforts to obtain an improved contract. Sun Country Airlines pilots are the lowest-paid Part 121 B-737 pilots in the country and have been in contract negotiations for more than five years. In February, the SCA pilots voted nearly unanimously to authorize ALPA to call a legal strike if necessary, upon a release from mediation by the National Mediation Board and the expiration of a cooling-off period.

“Sun Country pilots have the lowest 737 pay rates for scheduled carriers and are about 30 percent below the industry average pay for this equipment,” said SWAPA President Capt. Paul Jackson. “Low fares do not have to equal low wages in our industry and we fully support our friends at Sun Country in seeking a fair agreement.”

Sun Country management has failed to offer industry-standard fair compensation to pilots despite doubling the number of aircraft and profitability in recent years under new ownership. The company’s most recent contract offer would still leave the SCA pilots at the bottom of 737 pilot pay rates for another five years. The SCA pilots’ union leadership is proposing gradual increases toward the industry average, with the goal of reaching middle ground by the end of the contract term.

Skymark Airlines (Tokyo-Haneda) today (April 22) made it official. According to our partner ZipanguFlyer, the airline, Integral Corporation and ANA Holdings held a press conference today to announce the deal. As a result, Skymark Airlines will cease to be an independent carrier and  Japan will basically return to a two-airline group nation.

Skymark Inc. (Skymark), Integral Corporation (Integral) and ANA Holdings Inc. (ANAHD) have today agreed upon and executed a memorandum of understanding (the “Memorandum”) stating that Integral and ANAHD will jointly support Skymark which is currently undergoing civil rehabilitation proceedings.

1. Background for the Execution of the Memorandum

On February 12, 2015, Skymark appointed GCA Savvian Corporation as its financial adviser to broadly solicit and select sponsors who would be willing to support Skymark in its attempt to maintain and develop the value of Skymark‟s business. Following this selection process, Skymark has decided to appoint ANAHD to be the joint sponsor with Integral and has executed the Memorandum with Integral and ANAHD. ANAHD has experience with the rehabilitation of other Japanese airlines and has offered a wide range of support in sales, supplies and maintenance services to improve the value of Skymark‟s business.

ANAHD is the holding company of All Nippon Airways, ANA Wings, Air Japan Company Limited (full service carrier) Vanilla Air Inc. (a provider of low-cost carrier operations), ANA Sales Co., Ltd. (a travel business provider), All Nippon Airways Trading Company Limited (a trading business provider) and several other companies. ANAHD, whose mission statement is “Built on a foundation of security and trust, the „wings within ourselves‟ help to fulfill the hopes and dreams of an interconnected world,” is Japan‟s largest airline group, and has played a major role in Japan‟s air transportation services for over 60 years.

Beginning today, Skymark, Integral and ANAHD will, under the supervision of the Tokyo District Court and court appointed supervisor, hold detailed negotiations on the basis of the Memorandum and will execute sponsorship agreements and formulate a proposed rehabilitation plan (the “Proposed Rehabilitation Plan”) as part of the civil rehabilitation proceeding.

2. Main Points of the Memorandum

The Memorandum stipulates the basic conditions of the joint sponsorship by Integral and ANAHD of Skymark in order to achieve the revitalization of its business as an independent corporation, with shares issued by Skymark to be re-listed on the stock market as soon as possible.

The overview of the Memorandum is as follows;

(1) Capital Contribution and Payment of Debts

It will be stipulated in the Proposed Rehabilitation Plan that Skymark will perform a 100% capital reduction. After a confirmation order for the Proposed Rehabilitation Plan becomes final and binding, Skymark will perform a capital increase through the allocation of new shares. Integral, ANAHD and other entities will subscribe to these shares and become new shareholders.

The total amount of planned investment is 18 billion JPY, which will be used for the payment of debts (comprising common benefit claims, preferred claims and rehabilitation claims) outstanding at the time the confirmation order of the Proposed Rehabilitation Plan becomes final and binding.

In addition, Skymark is planning to execute commitment lines with financial institutions with the support of Integral and ANAHD to ensure that Skymark has the necessary working capital for its business operations.

Kharkiv Airlines (Kharkiv) has suspended operations according to ch-aviation. The airline, located in war-torn eastern Ukraine, was down to one aircraft, the pictured Boeing 737-8Q8 UR-CLS, which is now in maintenance. The airline hopes to resume operations this summer but this is unlikely as long as fighting continues in eastern Ukraine.

The company was operating charter flights to Antalya, Sharm-el-Sheikh and Hurghada from Kiev, Kharkiv and Lviv.

Norwegian Air Shuttle (Norwegian Air Norway) (Norwegian.com) (Oslo) is struggling with a crippling strike by its two pilot groups, NPU and Parathyroid. Norwegian has issued this statement (translated from Norwegian) to the two groups giving the unions a deadline to come to the negotiating table:

Norwegian will soon go into the seventh day of pilot strikes creating a state of emergency throughout the Group. Enough is enough. Over 100,000 travelers have so far been affected by the pilot strikes. The management of Norwegian Air Norway (NAN) has received authority from the management of the parent company to save the group from the current crisis. There is also a clear desire of some pilots in Norway, Sweden and Denmark will have the opportunity to influence their own future.

Attempts to get negotiations going have failed with the unions.

There are different situations in the three Scandinavian countries and the Norwegian has received questions from the Swedish and Danish pilots who do not want to risk their own workplace a result of, among other things, the NPU’s requirements for defined benefit pension. The Danish pilots already have a Danish pension and the Swedish pilots have their Swedish pensions.

The airline has given a deadline to the NPU and Parathyroid unions to come to the negotiating table.