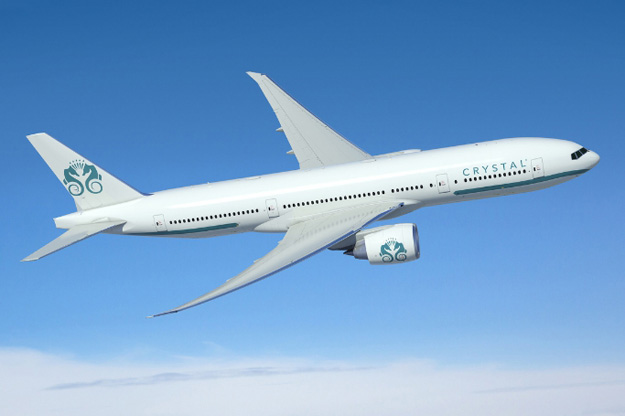 Crystal Cruises for Crystal Luxury Air (Los Angeles) has made this announcement:

Crystal Cruises, the world’s most awarded luxury cruise line, is once again pioneering new fronts in the luxury travel industry with the purchase of a Boeing 777-200 LR, offering an array of global itineraries for its expanded brand extension Crystal Luxury Air. The announcement comes on the heels of Crystal’s groundbreaking news in July of an extensive brand expansion, which will include extravagant air vacations around the world aboard a luxurious Boeing 787-8 Dreamliner.

In addition to doubling the initial air projections with the expanded aircraft fleet, Crystal will work with the Registry of Aruba in developing and securing an Air Operator’s Certificate (AOC). This will pave the way for Crystal Luxury Air to launch international operations. The twin-aisle Boeing 777-200 LR will be redesigned to accommodate just 88 guests with flat-bed first class seats; a beautifully appointed lounge and bar; and offer 14- and 28-day around-the-world and international itineraries, beginning in 2017.

The twin-aisle Boeing 777-200 LR, and the Boeing 787-8 Dreamliner, which typically seats up to 300 passengers and will be redesigned to accommodate just 52 guests, will boast the premium luxury that discerning global travelers have come to expect from Crystal, including copious amounts of guest space, plush amenities and Crystal’s world-class service and crew. Trips will include accommodations at the world’s most luxurious hotels, the finest Michelin star-level cuisine prepared by celebrated chefs and fabulous local cultural entertainment. Additionally, the aircrafts can be arranged for special charters.

Boeing (Chicago, Seattle and Charleston) and Qatar Airways (Doha) announced an order for 10 additional 777-8Xs and four 777 Freighters (below), valued at $4.8 billion at list prices, on the opening day of Paris Air Show 2015.

The 777X builds on the passenger-preferred and market-leading 777, as well as offering more market coverage and revenue capability than the competition. The 777X will include new engines, an all-new composite wing and will leverage technologies from the 787 Dreamliner.

The 777X family includes the 777-8X and the 777-9X, both designed to respond to market needs and customer preferences.

According to Boeing, “the 777-9X will be 12 percent more fuel efficient than the competition, necessary in today’s competitive environment. The 777-8X is 5 percent more efficient than its competitor at all ranges while providing for new network opportunities. Design of the 777X is underway and production is set to begin in 2017, with first delivery targeted for 2020. With this order, the 777X has accumulated 320 orders and commitments from six customers worldwide.”

Emirates SkyCargo, the freight division of Emirates (Dubai), is set to further strengthen trade lanes between Switzerland and its worldwide network with the introduction of a weekly freighter service from Basel to Dubai starting September 21, 2014.

The new freighter flight will supplement the existing belly-hold cargo capacity in the Swiss market provided on Emirates’ double-daily passenger services to Zurich as well as on the daily Geneva flights. Emirates SkyCargo currently offers more than 380 tons of capacity each week on its routes into Switzerland. Basel, the center of the Swiss pharmaceutical and chemical industry will become the 40th European destination to join the Emirates SkyCargo network, giving a further boost to bilateral trade links already in place between the UAE and the region.

Emirates SkyCargo will use a Boeing 777 freighter aircraft on the Basel-Dubai route, which is capable of carrying over 100 tons of cargo, and with its main deck cargo door being one of the widest of any aircraft, enabling it to uplift outsized cargo and carry larger consignments. The Boeing 777F is one of the most modern and technologically advanced freighters available and has the lowest fuel burn of any comparable size aircraft. Popular commodities and goods into and from the region are expected to be pharmaceuticals, chemicals, spare parts and medical devices.

Emirates has continuously built up its presence in Europe since the launch of London-Gatwick services in 1987. Today, Emirates operates passenger and cargo services to 37 European destinations, with Oslo (effective September 22), Brussels (starting September 5) and Budapest (effective October 27) joining soon the airline’s global route network spanning six continents. In addition to the new destinations, Emirates continues to add capacity to many of its European routes through larger aircraft and added frequency.

In addition to belly-hold cargo services on Emirates’ fleet of 225 aircraft to more than 140 destinations around the world, Emirates SkyCargo has a fleet of 13 freighters, comprising of eleven Boeing 777Fs and two Boeing 747-400 ERFs that operate from their base at Dubai World Central’s Al Maktoum International Airport.

Atlas Air Worldwide Holdings, Inc. (New York) today announced the acquisition of a Boeing 777 Freighter by its dry-leasing subsidiary, Titan Aviation. The aircraft is currently on long-term lease to AeroLogic GmbH (Leipzig), a cargo airline based in Germany and a joint venture of DHL Express and Lufthansa Cargo AG.

“With the purchase of this 777 freighter, we gain entry into an attractive aircraft type consistent with our strategy of investing in new technology that creates superior value for our customers,” said William J. Flynn, President and Chief Executive Officer, Atlas Air Worldwide.

“This deal represents an important part of our plan to grow Titan’s dry-leasing platform through selective investments in aircraft with existing leases that support leading operators in the airfreight industry. While Titan is principally a cargo aircraft dry lessor, its portfolio includes passenger narrow-body aircraft, engines and related equipment. It also provides customers expertise in asset management, passenger-to-freighter conversion, and other technical services.”

AeroLogic GmbH was founded in September 2007 with headquarters in Schkeuditz/Leipzig, Germany. The AeroLogic fleet is composed of eight Boeing 777Fs.