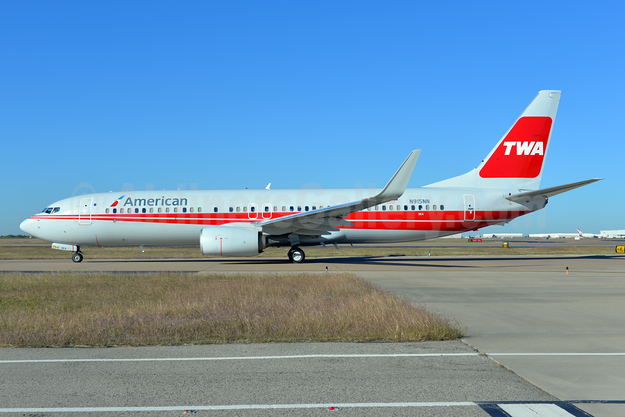 Video: American Airlines. AA brought this Boeing 777-300 ER to Sydney. Boeing 777-300 ER aircraft performed a flyover of Sydney Harbour and was welcomed by joint business partner QANTAS Airways in Hangar 96 at Mascot. The aircraft visit is a prelude to American’s new daily service from Sydney to Los Angeles, which starts on December 19, as part of the carriers’ expanded partnership announced earlier this year.

American Airlines (Dallas/Fort Worth) has unveiled its new 2015 version of its premium amenity kits for international flights. The airline issued this statement:

Starting this month, American Airlines will be upgrading the premium experience for its customers and paying tribute to the proud history of its employees around the world with all-new amenity kits for most international and transcontinental flights, featuring special, limited edition kits that honor nine airlines that laid the foundation for the new American. Every First Class and Business Class kit contains an improved collection of personal care products selected specifically for the modern traveler.

“We have more than 100,000 employees, each with their own unique story, and these retro amenity kits are a small tribute to the heritage of their careers and their legacy carriers,” said Fernand Fernandez, American’s vice president – Global Marketing. “Customers will also identify with the historic logos and colors of the companies that now form the fabric of the modern-day American Airlines. The all-natural, boutique toiletry products from red flower, a New York-based, eco-friendly beauty and lifestyle brand complete the experience.”

The heritage kits serve as a reminder of American’s beginnings and the many men and women who forged together to form the world’s largest airline. Each individual carrier brought with it thousands of employees and a proud history. The collectors’ items will revive the colors and logos of the following airlines, past and present:

Customers can experience the retro-themed heritage amenity kits through January 2016 when they travel in international Business Class or transcontinental First Class. They are contained in a stylish, felt case inspired by designer bags, sized specifically to be re-used as a mini-tablet computer case. The legacy themes will debut in batches of three every four months.

Above: The TWA amenity kit.

While these kits play up American’s retro branding, the airline took a forward-looking approach to selecting the personal travel products contained inside. The heritage amenity kits in international Business Class contain fabric lining, a pair of socks and an eye mask styled with the colors of a specific airline, a toothbrush and toothpaste, Scope® mouthwash, covers for Bose® QuietComfort® Acoustic Noise Cancelling® headsets provided with each seat, earplugs, a pen, tissues and hand lotion, lip balm and wipes by red flower.

The heritage amenity kits in transcontinental First Class contain the fabric lining, socks and eye mask with airline branding, a toothbrush and toothpaste, earplugs, and the trio of red flower products.

In addition, for the first time, American is rolling out amenity kits in Business Class on its transcontinental service between New York and Los Angeles and San Francisco, as well as Miami and Los Angeles. These kits contain a pair of socks and eye mask, a toothbrush and toothpaste, earplugs, and the trio of red flower products.

TWA operated 41 Lockheed L-1011s but ironically not the TriStar 500 model.

Since TriStar’s incorporation on January 14, 2013 we’ve worked hard to establish the aviation, accounting, maintenance, banking, risk management and other expertise to ensure this non-profit serves the community ethically and safely. We operate in compliance with FAA and IRS guidelines while implementing accounting practices that can track donations and expenses to specific aircraft and programs for transparent and effective fiscal management. We respect and are committed to growing the confidence our corporate and individual supporter have already shown us.

With a solid foundation TriStar has begun to share plans with the community at large. TriStar owns 3 aircraft plus a full motion flight simulator and will soon return to service its first aircraft to be used for both ground-based and in-flight programs.

The BAC 1-11 flight simulator has been moved from England to Kansas City via ocean freight. The simulator is in temporary storage until established in its new operating site.

The BAC 1-11 (N999BW) is being housed at Jet Midwest Technik and cared for by our directors of maintenance. Our pilot could fly it, but sadly a perfect engine is out of calendar time and requires either significant maintenance or a complete replacement. We’re hunting for a new engine and how to pay for it. We’re been told by several organizations that performing the required maintenance on the current engine as well as acquiring a suitable alternate engine are both about $250,000 to 300,000.

The L-1011 (N91011) now effectively ready to fly resides at its restoration site Pacific Aerospace in Victorville, California. We’ll ferry it to Kansas City as the next steps for painting and parking are finalized.

The MD-83 (N948TW) Wings of Pride will likely be the first to return to service. We’ll finish the effort to repaint to her original livery. This work is underway at the paint shop at Jet Midwest. We’ll also install new engines. These engines are expensive but less so than the BAC’s and more readily available.

Much has been accomplished but much remains to be done. We’ll soon share plans to provide educational aviation programs. Supporters have voiced concerns over the need to transfer knowledge from this generation to the next. We share this concern and are working to put TriStar’s aircraft assets to use toward this end.

Importantly TriStar has accomplished what is has because of people like you who love aviation and believe the use of these aircraft will inspire the next generation to greater achievement in STEM fields of study.

May 2002  Sub-leased to BWIA during a month, replacing a BWIA L1011 in heavy maintenance

All photos by TriStar History and Preservation Inc. For more information on the organization: CLICK HERE

Our own WAN unofficial public poll showed a higher margin – 57 percent approving of the new design with 43 percent picking the more traditional AA tail. Therefore the new tail is probably more popular with the general public than with the employees.

The repainting of the US Airways and US Airways Express aircraft into American colors will now begin.

The first new legacy logo jet will be for TWA. In our on-going poll for which TWA livery should be painted on the retrojet, our readers favor the last (1995) livery by around 35 percent. However the 1962 (red arrow, twin globes) livery (27 percent) and 1980 livery (twin stripes, bold titles) (24 percent) are running close behind.

American Airlines‘ (Dallas/Fort Worth) new 2013 livery was approved by out-going CEO Tom Horton as we have previously reported. Incoming CEO (and US Airways boss) Doug Parker is now putting the question of keeping this design or adopting a more traditional AA tail to an employee vote (all American and US Airways employees). One question is certain, either way, the fuselage will be painted because of the Airbus fleet and the newer Boeing aircraft like the 787.

Nearly 620 US Airways and US Airways Express aircraft now need to be repainted, let alone the remaining AA aircraft.There are now over 200 AA aircraft already repainted in the 2013 Horton design which features the large American flag on the tail. The new flight symbol logo (above) is everywhere now. However many employees miss the traditional AA on the tail (see below).

Doug has sent this message below to his expanded group of employees and is asking them to vote on two choices: silver paint with the new American flag on the tail or silver paint with the traditional AA on tail. Which do you like best? Please see our unofficial poll below for the readers of WAN (yes, AA-US employees can vote too in our poll).

Doug has also announced there will a TWA legacy retrojet (which color scheme?) to honor the proud employees of that once great airline. All of the heritage US Airways aircraft (including Allegheny, America West, Piedmont and PSA) will be retained in the new American along with one US Airways 2005 liveried aircraft and an American 1968 liveried aircraft. We have also included a TWA legacy poll below with all of the TWA color schemes and the years introduced. Which TWA design would you like to see?

Here is Doug’s full message to the employees:

American Livery Poll: Unless you are an AA-US employee, your opinion will not be heard. However you can give your opinion here. Vote for your favorite design.

TWA main liveries over the years (there were other minor variations but this is the main ones with the most recent at the top going back in time):

TWA 1995 (the last color scheme for TWA and the most stylistic):

TWA 1974 (basically the same as the later 1980 updated look, except with the harder-to-read red outline fuselage titles):

TWA 1962 (the classic early jet age “red arrow” and “twin globes” scheme, aircraft were called “StarStream …) (prior to this, early jet aircraft had a simple red TWA on the tail):

TWA 1952 (basically the 1945 with a white top, white was added to keep the aircraft cooler in flight, here is the the classic red and white “twin stripes” color scheme of the prop era):

TWA 1938 (“The Lindbergh Line” was pretty basic – only two tail stripes and red titles with a simple logo on a bare metal fuselage):