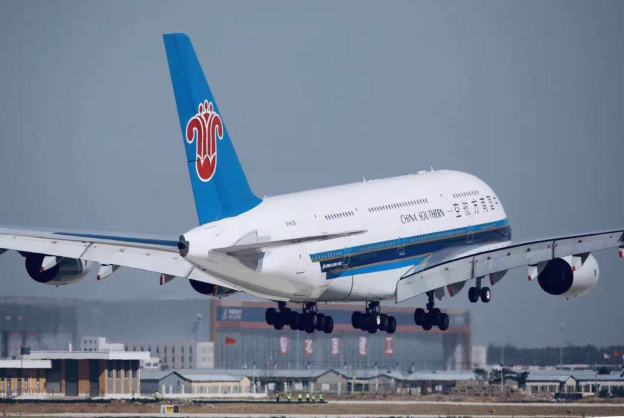 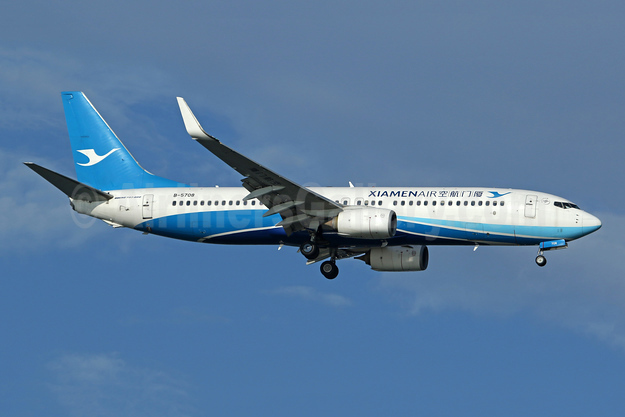 On December 18, 2018 Xiamen Airlines officially launched its Davao to Quanzhou nonstop flight, marking the opening of Davao’s first direct flight route to Mainland China. The new flight service is set to provide a bridge in the air for the economic and trade exchanges between Davao and Jinjiang of Quanzhou as sister cities.

Davao has thus become the fourth Philippine city where Xiamen Airlines operates direct flights, after Manila, Cebu and Kalibo. As the airline company enjoying the largest share of the commercial flight market between China and the Philippines, Xiamen Airlines has been facilitating the exchanges between the two nations through its flight network for 32 years in a row.

Quanzhou, one of the three central cities in China’s Fujian Province, holds the distinction of being the only UNESCO-accredited starting point of the Maritime Silk Road. A large number of ethnic Chinese in the Philippines trace their ancestry to Quanzhou as well. Davao, the third largest Philippine city, is one of the leading cities in the country in terms of interaction with China.

In October, the Consulate General of the People’s Republic of China in Davao officially opened. At the inauguration ceremony, China’s foreign minister Wang Yi specifically introduced Xiamen Airlines’ Davao-Quanzhou flight route, stating that it “is set to inject fresh vitality into the development of Davao and the southern part of the Philippines.” In November, Davao and Jinjiang of Quanzhou were paired up as sister cities, creating a solid platform for both cities to deepen goodwill cooperation and exchange on all fronts.

The Davao-Quanzhou flight route is serviced with Boeing 737s. The flight departs from Quanzhou Jinjiang International Airport at 09:00 every Tuesday and Friday, arriving in Davao at 12:15. The return flight leaves Davao International Airport at 13:15, arriving in Quanzhou at 16:30. It is currently the only direct flight between Davao and Mainland China.

The opening of the flight route not only provides ethnic Chinese in the Philippines with a fast and convenient “through bus in the air;” it also significantly facilitates business travels between China’sFujian Province and Davao, and is expected to boost economic, trade, cultural and tourist exchanges between the two regions.

Xiamen Airlines opened direct flights between Manila and Xiamen as early as November 1, 1986, making it one of the first Chinese carriers to offer direct flights between China and the Philippines. In recent years, Xiamen Airlines has devoted a greater part of its transportation capacity to the Philippines, providing vital air transportation support for the exchanges between the two nations on various fronts.

Before the opening of the Davao-Quanzhou flight route, Xiamen Airlines’ flight network covered three Philippine cities – Manila, Cebu and Kalibo, with six flight routes – Manila–Xiamen/Quanzhou, Cebu-Xiamen/Fuzhou, and Kalibo-Hangzhou/Fuzhou. These flights routes connected to all major cities across China. There were 34 flights a week on these routes, with an accumulative total of 7,690 flights and nearly 1 million passengers, giving Xiamen Airlines the largest share of the commercial flight market between the two nations.

Going forward, Xiamen Airlines will devote greater resources to flights between the two countries to create a flight network that offers regular services between major Philippine cities and China’s Fujian, Beijing and Hangzhou, which are the bases of Xiamen Airlines. This is expected to further facilitate the economic and trade exchanges between the nations.

Xiamen Airlines is officially launching its new direct flight between Paris and Fuzhou today (December 11, 2018). The opening of this new nonstop route will provide unique experiences for passengers.

The Paris – Fuzhou route operates three times a week (MF825 & MF826) every Tuesday, Thursday and Sunday, 13 hours and 25 minutes one way. It departs from Paris at 13:30 (GMT+8) and arrives at Fuzhou around 07:30 the next morning; the returning flight departs at 00:30 from Fuzhou Changle International Airport (FOC) and reaches Paris at 06:55.

The in-flight meal is specially designed with cultural influences from both Paris and Fuzhou.

The Chinese style option “Charm of Rong-City (Fuzhou)” was inspired by its local cuisine, tea culture and scenic spots. The appetizer is tea-taste meat hors d’oeuvres with tea-taste ribs soup. Main course is served with chopped-chili sea bass and Da-Hong-Pao tea-taste short ribs. Dessert is jasmine puff. Each bite takes passengers through histories and stories of Fuzhou, passionate or gentle, bustling or tranquil.

Xiamen Airlines is the first modern enterprise airlines in China. Founded in 1984, it has become the fifth largest airlines in China after 34 years of steady growth, and is the only airlines profitable for 31 consecutive years. It is also praised as ‘the Epitome of China’s Civic Aviation Industry’.

Since 2015, Xiamen Airlines has launched new intercontinental routes connecting Europe, North America and Oceania. From Xiamen and Fuzhou, passengers all around the world can seamlessly travel to more hot-spot destinations in Greater China area, Southeast and Northeast Asia.

Xiamen Air made this announcement on social media on December 1, 2018:

December 1 marked that the Boeing 757 ended his era of being a passenger airplane in China as our last Boeing 757 touched down in Xiamen Airport and completed its final commercial flight. Farewell, the most handsome member of the fleet. 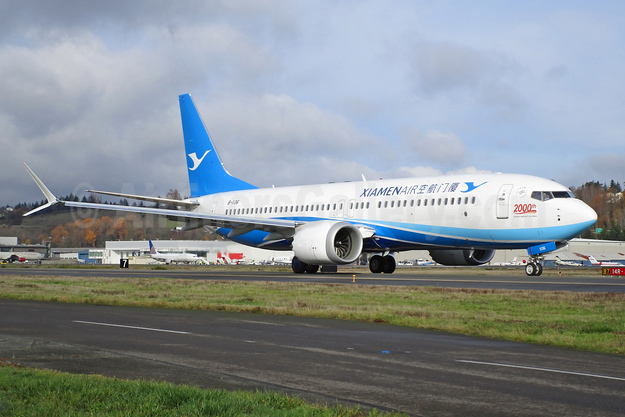 Boeing today delivered its 2,000th airplane to a Chinese operator, a 737 MAX for Xiamen Airlines. The milestone and the pace at which it was reached reflect the accelerating growth in the world’s largest commercial aviation market.

Boeing delivered its first 1,000 airplanes to Chinese airlines over four decades. The next 1,000 Boeing jets have now been delivered over the past five years. The rapid pace continues as one in four Boeing-made commercial jet goes to a Chinese operator, either through direct purchase or lease.

The new 737 MAX delivered today sports a special logo commemorating the milestone. It is the eighth MAX airplane to join fast-growing Xiamen Airlines, which operates the largest all-Boeing fleet in China with more than 200 jets. The carrier also uses Boeing Global Services to improve the efficiency of its network and operations. Xiamen is the first Chinese airline to use Optimized Maintenance Program, which leverages Boeing AnalytX to recommend customized airplane maintenance plans.

“We’re pleased to be a part of this historic delivery for Boeing and China,” said Che Shanglun, chairman of Xiamen Airlines. “In our 34-year history of operations, Xiamen Airlines has steadily grown, doubling our fleet size over the past five years and achieving profits for 31 years in a row. Throughout that time, Boeing has been a valued partner in our growth and expansion by providing safe and reliable airplanes.”

Xiamen Airlines is one of Boeing’s more than 30 commercial customers in China. In all, Boeing-made jets comprise more than half of the greater than 3,000 jetliners flying in the country.

China also plays a major role in building the world’s jetliners. The Chinese aerospace manufacturing industry supplies parts for every Boeing jet, including the 737 MAX, 777, and 787 Dreamliner. In December, Boeing and the Commercial Aircraft Corp. of China (COMAC) are set to deliver the first 737 MAX airplane from a completion and delivery center in Zhoushan, China. The facility will handle interior work and exterior painting of 737 MAXs for the Chinese market. Final assembly work will continue to be done at Boeing’s factory in Renton, Wash.

Boeing activity in China is valued at more than $1 billion in economy activity in China. This includes procurement from Boeing’s extensive supply base, joint venture revenues, operations, training, and research and development investment.

Air France, KLM Royal Dutch Airlines, China Southern Airlines and Xiamen Airlines have today announced in Amsterdam the merger of their existing joint venture agreements. The aim is to create even stronger links between the partners and offer customers smoother, seamless travel solutions.

It has been a good week for France.

Air France-KLM customers can also earn Flying Blue Miles on all flights operated within this joint venture formed by the four airlines.

This extended joint venture marks an important step for Air France-KLM. Moreover, it contributes tostrengthening the two airlines’ position on the Chinese air transport market, which continues to grow. Everyyear, the four airlines – Air France, KLM, China Southern and Xiamen Airlines – carry some 1,250,000 passengers between Europe and China on their joint-operated routes.

Pieter Elbers, KLM President & CEO, stated: “In 2016 we celebrated 10 years joint venture between KLM and China Southern, today we merge the existing two joint ventures into one. I’m proud of this joint venture because it serves to further intensify Air France-KLM’s interests in China. Joining forces offers ourcustomers an extensive, seamless network within China and Europe.”

Patrick Alexandre, Executive Vice President Commercial, Sales and Alliances, Air France-KLM added: “We are proud to pursue our cooperation with China Southern and Xiamen Airlines by combining the existing joint-ventures. Our single joint venture will at the same time preserve the benefits our customers enjoy and safeguard Air France-KLM’s position in China.”

A global joint venture between Europe and China 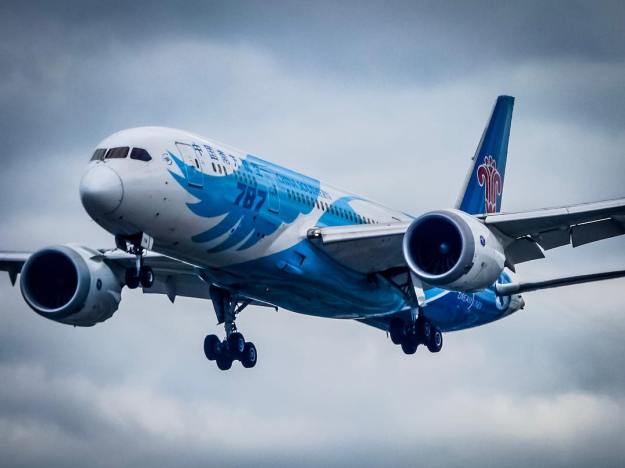 Since 2006, KLM Royal Dutch Airlines and China Southern Airlines have been operating a joint venture on the Amsterdam-Beijing service. 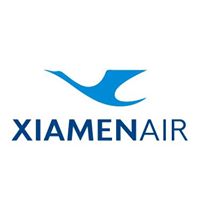 Below: Xiamen Air is now the last passenger operator of the Boeing 757-200 in China. The 757s will soon be retired.

With the addition of the aircraft, Xiamen Airlines passes a key milestone, with the size of the fleet now at 200 airplanes. The airline passed the first milestone of 100 planes in 2013, and continued to grow by adding roughly 20 aircraft per year and doubling the size of the fleet within five years. During the period, the airline’s operating profits also increased year by year, booking gross profits exceeding 10 billion yuan (approx. US$1.5 billion). The airline has been profitable for 31 consecutive years, reflecting the rapid growth in China’s civil aviation industry.

Che Shanglun, chairman of Xiamen Airlines, revealed that the airline’s rapid growth was mainly attributable to the economic stimulus that resulted from China’s reform and opening up and the constant improvement in the living standard across China, which, in turn, led to the massive boost in the demand for air travel. Over the past five years, the US, Europe and China recorded an average annual growth rate of roughly 4 percent, 6 percent and 10 percent in civil aviation passenger volume, respectively, while Xiamen Airlines experienced an average growth rate of 15 percent.