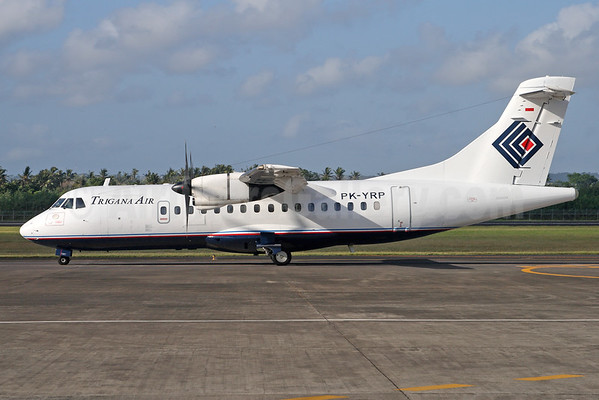 Trigana Air Service (Jakarta) flight TGN 267 with 49 passengers and five crew members on board and operating between Jayapura to Oksibil in Papua, eastern Indonesia has gone missing today (August 16). The airliner is now overdue and is feared to have crashed in the remote area. The flight was operated with an ATR 42-300 registered as PK-YRN (msn 102). The flight crew lost radio contact with ATC before 1500 (3 pm) local time after taking off from Sentani Airport at Papua’s regional capital of Jayapura (see the map below).

The company started regional operations in 1991.

Under the agreement signed this morning by Emirates President Tim Clark and QANTAS CEO Alan Joyce, QANTAS will move its hub for European flights from Singapore to Dubai and enter an extensive commercial relationship with Emirates.

The 10 year code sharing partnership is enhanced by integrated network collaboration with coordinated pricing, sales and scheduling as well as a benefits sharing model.  Neither airline will take equity in the other.

The partnership will see QANTAS, along with anchor tenant Emirates, as the only other airline operating at Dubai International’s Terminal 3. The two airlines will jointly offer 98 weekly services between Australia and the global gateway city of Dubai including four daily Airbus A380 flights. With Emirates flying the largest fleet of A380s in the world with 23, combined with QANTAS’ 12 A380s for a total of 35, many onward flights to Europe including London Paris, Moscow, Amsterdam, Munich and Rome will also be on this popular aircraft. In addition, QANTAS will launch daily A380 services from both Sydney and Melbourne to London via Dubai for a combined unprecedented seven daily A380 flights to London Heathrow.  Thirty additional European gateways can be seamlessly reached from Australia via Dubai.

For Emirates customers it will open up QANTAS’ Australian domestic network of more than 50 destinations and nearly 5,000 flights per week.  The carriers will also coordinate their respective trans-Tasman services between Australia and New Zealand with Emirates offering improved schedules for flights to Christchurch and Auckland – including the introduction of Emirates’ daily A380 services on the Melbourne-Auckland route in October.

Emirates and QANTAS frequent flyer agreements will be aligned, giving customers expanded opportunities to earn and redeem points, with reciprocal access to tier status benefits including end-to-end recognition of customers, lounge access, priority check-in and boarding as well as other exclusive services.

Emirates and QANTAS will work together to ensure a seamless customer experience, including mutual lounge access, shared use of Emirates’ unique dedicated A380 facility slated to open in early 2013 in Dubai, coordinated baggage allowances and a chauffeur service for premium customers.

The airlines will submit applications for authorization to the Australian Competition and Consumer Commission (ACCC) and other relevant regulatory authorities, in order to begin commercial planning.  Subject to regulatory approvals, it is anticipated that the partnership arrangements will take effect in April 2013.

QANTAS has admitted its cannot continue to sustain its financial losses for its international services and it cannot go it alone, hence this new relationship. British Airways will have to forge a new relationship with another Australia carrier. Is the Oneworld Alliance in trouble?